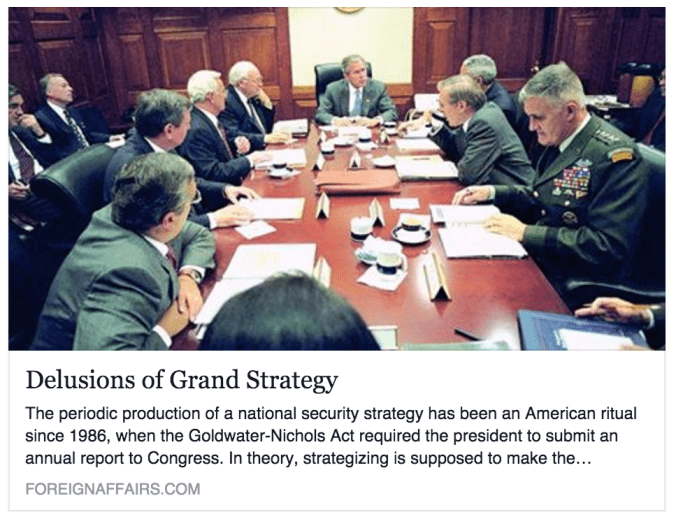 I just read David Edelstein and Ron Krebs’ provocative piece ($) in Foreign Affairs on how the practice of grand strategy leads to threat inflation. One section struck me as somewhat problematic in that it seemed to derive little influence for ideational factors in the construction of the liberal order, as if the United States was materially driven to choose that path. They write:

Indeed, the United States has acted as a liberal hegemon, more or less coherently, ever since World War II. But this is less the product of a formal grand strategy than the result of enduring structural features of the international and domestic landscape: the United States’ material preponderance, the powerful corporate interests that profit from global integration, the dominance of core liberal tenets in American political culture.

Yes, liberal tenets are in their list, but everything we’ve read about U.S. decisions in the midst/wake of WWII (Ruggie, Ikenberry) suggest some leaders drew lessons of the Depression and the war to conclude that the U.S. needed to step up as architect of a new liberal order. Maybe that’s just self-serving justification for policies that the U.S. fell into after the war through pragmatic trial and error.

I’m persuaded that a single National Security Strategy may be a problematic ritual, but I wonder if the exercise of grand strategizing that is more competitive and open-ended (with multiple narratives) as they write is an important one.

Competitive efforts like the Princeton Project on National Security chaired by Anne-Marie Slaughter and John Ikenberry strike me as valuable, helping shape the ideational environment for U.S. foreign policy. That said, the end product, given the cacophony of challenges in the contemporary world, resulted in what Anne-Marie Slaughter identified as the need for a Swiss Army knife approach to foreign policy, which makes it hard to sustain a unitary vision. That may okay given the world we live.

Based on what Edelstein and Krebs write, it seems simultaneously that whatever foreign policy we do, we’re bound to do because the system made us do it! At the same time, they suggest that attempts at grand strategy lead to mistakes and finding threats, because there is no value to be gained by downplaying the security environment:

The result is that even when the nation’s external security environment is extraordinarily benign, strategists make it seem anything but.

This suggests a sort of contradiction, either policymakers are largely driven by material circumstances to settle on appropriate policies anyway, making exercises in grand strategy epiphenomenal, or actors have agency and thus grand strategizing can be either good or bad. In their view, the domestic political incentives inevitably encourage problematic grand strategizing, looking for threats when there are none, few, or many small ones.

That seems more likely in times of low security threat, when it is difficult to figure out priorities, though the tendency may be for domestic priorities to win out in such moments, which might not be too catastrophic. In those times, competitive narratives of grand strategy are more likely to emerge. While the playing field might not be level, the absence of overriding threats ought to trigger more dialogue about strategic priorities, exactly the kind of environment Edelstein and Krebs favor.

When security threats are clearer, the material environment can help suggest (or select even) what to prioritize, leaving some policymakers reduced but residual slack to f— things up or make good choices.  I dunno, what do you think?