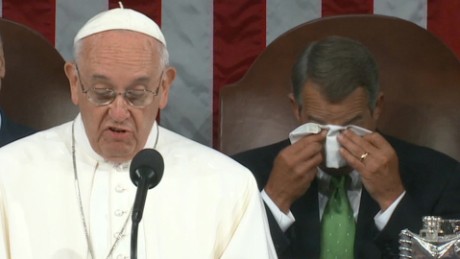 This is a guest post from Nathan Paxton, Professorial Lecturer in the School of International Service at American University and a 2015-2016 APSA Congressional Fellow.

Now that Pope Francis has jetted back to the Vatican on “Shepherd One”, we have the chance to talk about the theoretical underpinnings of the pope’s international politics. I hope you’re as excited to have a political theory discussion as I am. Primarily, I want to discuss what I think the papal view of politics is, how it fits in with liberation theology, and what that means to those of us who care about international and comparative politics.

Pope Francis’s message to Congress was shot through with the idea that politics can at its best be a means for the flourishing of each individual human person. That flourishing is the end of human community, and the goal of all human society should be to maximize the common good. Importantly, however, politics is a mean, not an end per se.

Politics is, instead, an expression of our compelling need to live as one, in order to build as one the greatest common good: that of a community which sacrifices particular interests in order to share, in justice and peace, its goods, its interests, its social life. (Address to Congress)

The emphasis on community and personalism is one of the best indicators that we have that the pope is not a liberal, either in the classic political theory sense nor in the impoverished contemporary American political discourse sense. He’s a pre-Burkean conservative, in that his emphasis is on the traditional, the communal, and what historian Brian Porter-Szücs calls “harmonious social relations.” Because “classic liberalism” promotes both individual liberty and free-market capitalism, it is an atomizing force, prizing and exalting the individual above the ensconcing community and so providing the basis for eventually breaking down that community as every individual pursues what seems to them their own good.

As Szücs points out,

As Popes John Paul II and Benedict XIV made clear, this rejection of liberalism entails constraints on individual liberty in the areas of sexuality, reproduction and marriage. Now Pope Francis is reminding us of the other side of this anti-liberalism: a rejection of capitalism. Just as people are not free to conduct their sexual lives as they see fit, neither are they free to do whatever they want in the economic sphere.

None of this is new in papal teaching. Since 1891, with the publication of the Rerum Novarum encyclical, popes have been affirming human communities above the political choices of liberalism and socialism, seeing both a potentially violative and destructive of human dignity.

The above all gels nicely with the realization that Francis also has roots in the liberation theology movement of the Latin American countries. As a Latin American pope—the first pope from outside of Europe in 1200 years—he’s familiar with being internationally at the margins of the world’s cares. Not only do they come from a position at the antipodal periphery of the world, Argentina and Argentines also come from the perspective of being subject to the influence of their northern neighbor, a neighbor who has routinely dominated and intervened in Latin American affairs for the last two centuries, invading countries, and supporting anti-democratic leaders and movements in the region, often in pretty shady ways.

As a Jesuit—of which R.R. Reno, editor of the conservative First Things journal, has said, “Jesuits are clerical commandos, clerical Green Berets”—Francis is open to disputation, even encourages it. He appears confident that allowing and provoking argument and highlighting less-noticed viewpoints does not make other ideas disappear. In that sense, he’s like many of us in the classroom, consistently posing alternatives to the truisms that our students articulate, pushing them to remember that there are more ideas than the dominant ones they hold.

All of this is to say that liberation theology has attractive elements to a pope from the Latin American context. With liberation theology’s primary aspect its “preference toward the poor” (an alternate phrasing to the more common “preferential option/choice for the poor”), it has an attraction for a leader from a marginal part of the world, a leader trained in dialogic and disputational methods of reasoning. Not only that, but it sounds pretty much like the Gospels, which also emphasize the poor.

Liberation theology—which has many forms, not just the Marxist ones most non-theologians have heard about—prioritizes the poor. It argues that one must look at faith and society through the eyes of the poor, because that is how God looks at the world. It’s a practice-oriented theology that argues social institutions should be oriented toward helping the poor most of all, since they are the social group least able to access the benefits that government, banks, police, and other social organizations and institutions provide.

Paul Farmer, the anthropologist-physician who founded and still runs Partners in Health and who was the subject of Tracy Kidder’s Mountains Beyond Mountains, has articulated an anthropological theory of the “preferential option for the poor.” The explanation I offer my students is that preferential option means that when society is providing benefits those who are poor should get to be at the head of the line because they are the ones who would be most likely to lose out on those benefits without the help.

Francis seems disposed, then, to see politics as a means to upholding the essentially personalist nature of the most authentic human communities and to rectifying the primary and root problem—poverty—that comes from losing that character. And that’s what underlaid his speeches to Congress and the UN General Assembly.

Four Americans and what they mean

The pope held out four Americans as ways of “seeing and interpreting reality”: Abraham Lincoln, Martin Luther King, Jr., Dorothy Day, and Thomas Merton. While the first two are familiar to many Americans, the latter two are likely to be relatively unknown to many folks.

These four representative individuals tell us something about why the pope emphasized the issues that he did in his speech. Three of them come from the midcentury high point of “liberal” Christian activism, when names like theirs, along with people like Reinhold Niebuhr and C.S. Lewis were well known among both intellectuals and the larger public. Three of them (King, Merton, Day) were all outspoken activists against war and the Vietnam War in particular.

Three of them—again, King, Day, and Merton—made poverty central concerns of their life’s work. Whether the vowed poverty of Merton, the chosen poverty that day spent decades of her life living, or MLK’s concern for economic justice as the necessarily linked counterpart to civil rights and political justice, these three saw poverty as a condition that crushes the humanity of the poor.

Probably the most interesting aspect of what Francis had to say regarded the development of the poorest countries of the world. The whole address to Congress, as well as his encyclical Laudato Sì, are all about development both internationally and within countries. Francis’s concern for the environment flows directly from his concern and laser-like focus on the “least among these”, the choice for the poor. Poverty, as three of his representative Americans argued, dehumanizes and depersonalizes.

Francis has not been the only major Christian leader in front on environmental issues. His All-Holiness, the Ecumenical Patriarch of Constantinople, Bartholomew, has been advocating on environmental issues since the beginning of his tenure in 1991. About 20 years ago, Bartholomew started convening 10–14 day shipboard symposia to focus on the plight of the environment, bringing together environmental scientists, religious leaders, and journalists. Because all these different stakeholders are on board a ship together, they can’t escape and are forced to talk and understand one another, especially where they can make common cause.

One of Bartholomew’s greater innovations in this realm has been to define environmental degradation as a sin. This lets him argue that failure to act responsibly and thoughtfully in the ecological world is not just foolish but morally and ethically wrong, and it makes the environment this doubly a concern of religious leaders.

For Francis, however, development’s environmental negative externalities hit precisely those people that development is supposed to help, the poor. Poor people end up on the toxic waste sites, the ship breaking yards, with their land expropriated, and living precarious lives in slums. This is where the triple foci, at least in politics, of the Francis papacy so far come into relation: development has generally meant the extension of market-based, “late” capitalism into all sorts of domains and realms of social life; even so, many people (one to two billion, or 14-28 percent of the global population) remain officially poor; and our economies and economics have come to see environmental and human poverty simply as “negative externalities” of the project of global capitalism. In this perspective, you can’t talk about the environment without discussing human poverty, and you can’t discuss either without thinking through the logic of contemporary capitalism. Francis made this clearer in last summer’s “environmental encyclical”, Laudato Sì:

The human environment and the natural environment deteriorate together; we cannot adequately combat environmental degradation unless we attend to causes related to human and social degradation. In fact, the deterioration of the environment and of society affects the most vulnerable people on the planet.…Today, however, we have to realize that a true ecological approach always becomes a social approach; it must integrate questions of justice in debates on the environment, so as to hear both the cry of the earth and the cry of the poor.” (Paragraphs 48 and 49)

The future with Francis

Francis is not going to back down on his rhetoric regarding poverty, techno-economic capitalism, and the environment. He has spent most of his adult life immersed in the personalist philosophy that’s led him to human poverty and the environment as his “issues.” What I think is most interesting about his stances on international development and the international movement to prevent further environmental degradation—stances that many people label “radical”, “progressive”, and “simple-minded”— come from truly conservative (as in conserving traditions and ideas) and deep philosophical roots. It’s probably not entirely possible to make sense of what he’s saying and doing, especially when he speaks to audiences who aren’t officially Catholic like Congress and the UN, without understanding that he works in a worldview almost entirely unfamiliar to developed-world elites.

Francis seems to want the world to know that the Roman Church has a tradition of philosophy and social teachings that provide an alternative framework to the dominant paradigm of society, politics, and economics. Given that our contemporary politics and economics seems often unsuited to addressing global poverty and environmental degradation on its own, it may be worth getting to know the intellectual foundations underlying the most smiling and influential Argentine we’ve ever met.

Putin Falls Into Obama’s Syria Trap. (Or Is It The Other Way Around?)