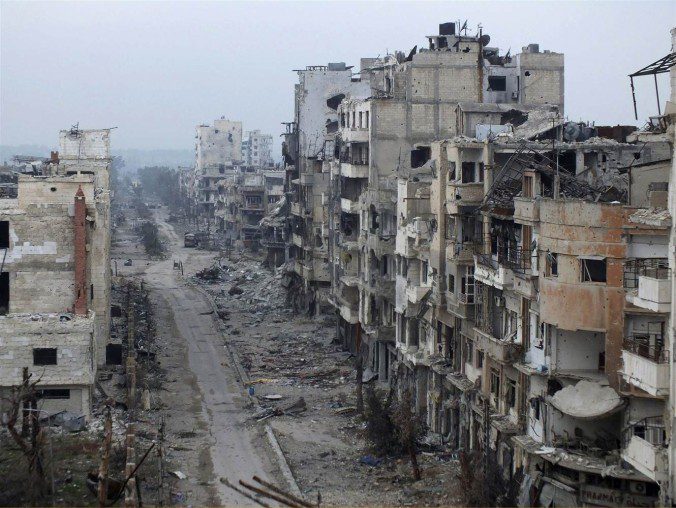 Rhetorical Entrapment and Syria: Let’s Not Do Dumb Stuff

I’m on team Dan on the question of not freaking out over Syria. I don’t think Jeff’s assessment on this blog reflects the reality which is one of Russian weakness, nor am I convinced, per Seth’s conjecture, that the Obama administration had some master plan to lure the Russians in to Syria.  Russia’s moves in to Syria suggest real fear that their long time client state could fail. By one estimate, the Syrian army  has been reduced by 2/3 to less than 100,000, and as Dominic Tierney points out in The Atlantic,  Assad may control only a 1/5 of Syria.

I also agree with a number of folks like Dan Drezner and Andrew Kydd that this is likely to be a quagmire for Russia.  As Brookings’ Jeremy Shapiro points out, nobody, least of all Republicans, appears to have an alternative approach to what the Obama administration is doing:

The truth is that everybody’s critical of the Obama policy in Syria, and nobody has a better alternative. I’ve never fucking heard one. And if you heard something that even resembles a good idea on Syria in the Republican debate I would eat my head.

That said, in terms of the administration, even former Obama officials such as Phil Gordon acknowledge that a new approach is needed:

There is now virtually no chance that an opposition military “victory” will lead to stable or peaceful governance in Syria in the foreseeable future and near certainty that pursuing one will only lead to many more years of vicious civil war. Stopping the conflict will require all the regional powers that are currently fueling it—including Russia, Iran, Saudi Arabia, Qatar, Turkey, the United Arab Emirates and the United States—to come to terms with the reality that their maximalist objectives cannot be achieved, and that the result of trying to achieve them will mean only more misery and conflict throughout the region—at high cost to them all.

The problem is that the Obama Administration has painted itself in to a corner by saying that Assad must go. This is what Frank Schimmelfennig once called  “rhetorical entrapment” which allows opponents of the administration to take advantage of the administration’s failure to keep pledges about “red lines” by imposing political or what Kelly Greenhill calls, “hypocrisy costs.” The Republicans don’t necessarily wan’t to do anything different on Syria; they just want to exact a pound of flesh to make the administration look weak (as polling suggests, the American people are not all enthusiastic about a more robust role in Syria beyond bombing the s–t out of ISIS).

Obama faced this dilemma once before in the lead up to the potential bombing of Syria over its violation of the red line over chemical weapons. I think he determined that the political costs of going against his word were lower than the actual costs and potential blowback of owning Syria after bombing it. This reflects the wider observation by Andrew Guzman and others that the negative reputational costs of not keeping your word or not showing resolve may be quite limited.

This raises a larger question about to what extent does credibility and a reputation for resolve matter. Jeff clearly thinks that Russia has inferred quite a lot from the Ukraine case as a signal to do more adventurism in Syria:

By not confronting Putin and Russia sufficiently over its illegal and unwarranted invasion and occupation of Ukraine, the U.S. and its western allies effectively gave Putin a green light to project force in other key geostrategic hot spots.

Russia however hardly got off scot free in Ukraine with sanctions in place, its economy in shambles, and, as Dan points out, stuck with a frozen conflict that will continue to pose a costly drag on the country.

Is the U.S. in fact at risk of cultivating a reputation for weakness? First, we have to acknowledge that the literature on this question is decidedly mixed. Daryl Press did some important work to puncture the notion that actors infer too much across cases to draw conclusions about country’s reputations for resolve in crisis situations. A recent IO paper ($) by Alex Weisiger and Keren Yarhi-Milo suggests reputation for backing down in past crisis is what other states use to infer interests, making reputation a more potent force than many think. They test this empirically and find that states that have a history of backing down get challenged more frequently.

What does this mean for Syria? I think the challenge here is that Russia might rightly be inferring from the previous failure to bomb that the U.S. interests in Syria are limited, but this doesn’t mean that U.S. interests say in expansionism elsewhere would go unpunished. As for resolving the Syria conflict itself, Obama probably needs to again pay the political costs of backing down from saying Assad must go before negotiations even start. It might hurt the Democratic nominee marginally going in to the 2016 elections, but preventing Syria from being taken over by ISIS would be far worse and trying to instill life in our unicorn army of moderate rebels is a recipe for continued humanitarian tragedy in Syria with spillover effects on Europe that are very high.