This is a guest post by Alison Howell, Assistant Professor, Department of Political Science, Rutgers Newark

With the recent APA decision to prohibit their members from participating in enhanced interrogation, and the demise of the human terrain program earlier this year, the optimistic amongst us might be tempted to believe that the academy is once again purified of its collusions with torture and occupation.

The work to be done going forward, however, is not just one of holding individuals to account or raising the bar of individual ethical standards. We also need to find ways of holding academic sciences to account: of treating them not as dispassionate and apolitical ventures, sadly misused, but rather as formed within martial and racist cultures that shape their content and applications. This is as true for disciplines like Physics and Neuroscience as it is for social sciences like Anthropology, or, for that matter, IR.

In order to grapple with this complex state of affairs, we are going to have to begin by seeing the decision by the Bush administration to pursue torture for what it is: evidence-based policy. Bush-era torture is not best described as a form of exceptionalism or even as sadism. If we explain torture solely in terms of the violent and vengeful desires of political elites or interrogators, we miss how torture is produced through rational systems of science. To focus on individual motivations is to ignore the fact that torture was pursued on the basis of what psychological authorities informed decision-makers was scientific evidence. This is consistent with the long history of entanglement between Psychology and war-making.

Melanie Richter-Montpetit has elsewhere blogged on the question: ‘Why Torture when Torture Does not Work?’ She points out that liberal shock at torture misunderstands the practice as an exceptional return to medieval barbarism, failing in the process to recognize the afterlife of racial-sexual grammars of chattel slavery which legitimate anti-Black violence and produce imperial sovereignty. I agree with Melanie that detention and torture do not signal some sort of exception, and that we need to ascertain what systems of power torture arises within. Included amongst these are systems of race and science, in which the university sits as a powerful institution.

The decision to pursue a policy of ‘enhanced interrogation techniques’ was made on the basis of scientific evidence, and through the assistance, if not lobbying, of academic psychologists. Some existed on the fringes of the discipline, but others, including former APA Presidents, sit at its epicenter.

The various reports on the post-9/11 use of torture, and on the role of psychologists in devising and executing torture with the tacit support of their professional association, reveal that it was not merely a matter of a few wayward psychologists. Psychological science itself was deployed to justify and devise torture.

Key to understanding this situation is the scientific authority of the theory of ‘learned helplessness’, and its long history of entanglement with racist thought and action. 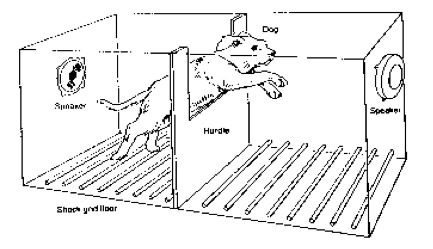 Learned helplessness theory was first forged in the late 1960s by noted psychologist Martin Seligman (a former APA President and consultant to the CIA & US Army) and colleagues. It is based on experiments involving administering painful electric shocks to dogs. Seligman observed that dogs that had undergone shocks they could not control or stop became passive and helpless. Moreover, they stayed that way even when subsequently put in contraptions (pictured above) where they could control the shocks. Extrapolating these results to humans, learned helplessness theory posits that depressive states are an artifact of people’s perception that they are not in control of their environment.

This theory proved useful in several ways. Formulated at the time of civil rights protests, black militancy and anti-racist uprisings (or, ‘race riots’) in Newark, Detroit and other cities in the late 1960s, learned helplessness theory misguided War on Poverty policy to target the supposedly low self-esteem of poor African Americans, rather than the systemic inequalities that they faced. Then, when racial equality didn’t magically appear, it came in handy for conservatives who blamed the apparent failure of such programs on the psychology of the poor and racialized themselves, who were deemed to be unwilling to unyoke themselves from their ‘learned helplessness’.

Learned helplessness theory was deployed as a means for pursuing racist policies, on the basis of its scientificity. This was “evidence-based” policy.

Fast-forward to late 2001, just months after 9/11. Once again, learned helplessness theory was promoted by noted psychologists as a valuable tool in intelligence gathering. Organized interrogation is a theory-based practice. There are in fact contending theories of interrogation, with some emphasizing gaining the trust of informants, for example. But in 2001, many psychologists in and around the CIA (some of whom made buckets of money) advocated, or even lobbied for, interrogation based on learned helplessness theory (i.e. torture).

The scientific logic they set out follows that of administering of electric shocks to dogs in the original experiments: induce pain and the subject will perceive that they are helpless and become a passive and cooperative purveyor of intelligence. The torture techniques these psychologists developed are not crude revivals of medieval barbarism. Like many other techniques that have been central to western colonialism, they are calculated according to contemporary scientific “evidence”, in line with the authoritative scientific wisdom of the day.

It is for these reasons that we can best describe CIA torture as an instance of evidenced-based policy making, and an example of why we might do well to be cautious of this current fashion in policy-making, not to mention alert to forms of contemporary race science that inform international relations practice.

What Does it Mean to Promote Human Rights?

Prediction: For whom the bell tolls?