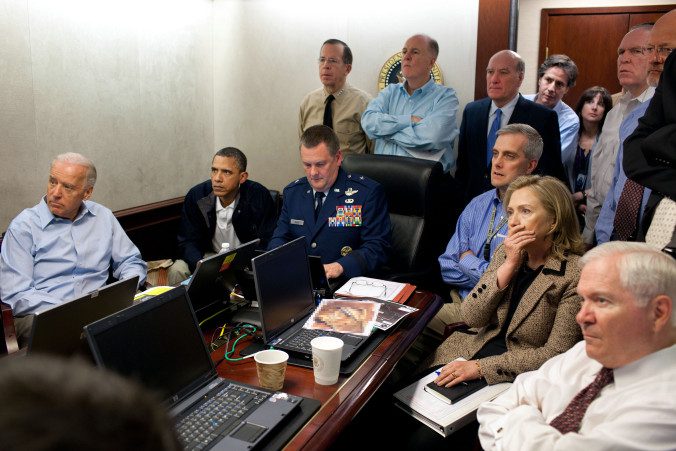 So, this is third installment of my series on defending Obama’s foreign policy, part of an extended set of remarks for a debate with Colin Dueck that one day, weather permitting, we shall have. In part 1, I laid out the legacy of the Bush years and in part 2, I identified the Obama administration’s strategic inclinations and achievements. Here, in part 3, I try to identify lines of critique from Dueck and other folks critical of the Obama administration’s policies.

On Russia, Defense Spending, and US Standing

Finally, let me say three things about Russia, US defense spending, and US standing in the world.

On Russia, critics of the Administration will fault it for acquiescence in the face of a resurgent revisionist Russia in Ukraine (and beyond in Syria). We shouldn’t blithely embrace the notion that we’re acquiescing too readily to Putin in Ukraine and Syria, that we’re somehow rewarding him by not arming the Ukranians or by not taking him on directly in Syria.

I see the situation rather differently that the US has led an effective countervailing coalition that has imposed through sanctions deep costs on a weak Russian regime that now finds itself saddled with Crimea and an economy in tatters. The United States has also sought to reassure NATO members and send appropriate signals to Russia that an expansionist policy outside of its area of its near abroad in to areas strategically important to the US would be unwise. Neither Ukraine nor Syria are central battlefields of strategic interest to the United States so the appropriate strategy is one of punishing Russia for adventurism in Ukraine and channeling Russia’s intervention in Syria to help bring about a political solution in Syria.

Russia may be revisionist but it isn’t a rising power (see Dan Nexon here on the Duck). It’s a nasty actor with nuclear weapons, so we have to treat them with some caution but I don’t think we should allow ourselves to be fooled by Putin’s adventurism (in either Ukraine or Syria) to embrace it as a sign of strength. China, by contrast, is a rising power, with a large population, a growing (albeit creaky) economy, and increased military capability that will only get stronger.

On defense spending, critics of the Obama administration (Marco Rubio, Bret Stephens of the Wall Street Journal, the folks at Heritage, among others) will also talk about the hollowing out of American power, with expenditures having declined as a share of GDP to some of the lowest levels since the end of WWII. They will complain about the small size of the Army, the inadequacy of our Navy. They will fault the administration for insufficient investment in military modernization and some major weapons systems such as modernizing the country’s nuclear weapons.

I would remind these critics that the United States still spends more on defense than the next seven countries combined. The spending increase that occurred after 9/11 was inevitably going to decline as the wars in Afghanistan and Iraq were brought to some measure of closure. We’re still spending 45% more on defense in real terms than were before 9/11 ($577 billion in 2011 dollars compared to $397 billion in 2001, according to SIPRI).

We have to remember that the Obama administration placed a premium on recovery of the U.S. and global economy. While during WWII, military spending helped pump prime the US economy to emerge from the Great Depression. Today, unsustainable borrowing to finance short-term build-ups in military capacity could come at a cost to long-term economic recovery. Theories of hegemony note that global leadership is a function of capacity and willingness. The financial crisis and military spending threatened both, undermining the health, that is the capacity of the United States, to rebound in the long run to face and manage a rising China.

A deteriorating domestic situation also threatened to undermine U.S. domestic aspirations for global leadership with rising proportions of Americans, particularly among Republicans and Independents, flirting with neo-isolationism. A domestic strategy of economic renewal was a recipe for restoring the ability and willingness of the American people to lead, as we saw in the wake of last year’s Ebola crisis when American leadership (and public support for that endeavor) rose to the occasion to help stamp out a deadly pandemic.

A revived economy at home also gives more breathing room for the U.S. to increase military expenditures in the coming years if the situation demands it. We have to remember that if there has been too much budget cutting it is because sequestration, which came about because of Congressional Republican intransigence, led to across the board cuts in spending. With last week’s budget deal, many of the cuts that the Republicans foisted on the country by leading us to the across the board sequestration cuts have now been rescinded. $80 billion in defense spending was restored over the next two years, not including an additional $32 billion for contingency operations.

Finally, as for American standing in the world, President Obama is wiser to the challenges of chasing global public opinion. He wanted to be on the right side of history as global processes like the Arab Spring unfolded. He wanted to restore trust in America by closing Guantanamo, ending the practice of aggressive interrogations. On some measures like Guantanamo, he has been stymied by domestic opposition.

On others, the continued terrorist challenge meant that an intrusive surveillance state endured along with it an apparatus for targeted killings abroad, measures which Americans continue to support in high proportion. Foreigners may not like it but Obama has largely concluded they can lump it. And, he can live with that, because despite his high-minded rhetoric, he is essentially a realist, a pragmatic shepherd who has sought to prepare the United States to weather tumultuous times, with a clear-eyed gaze on the country’s real strategic priorities – a healthy global economy, a right-sized intervention in the Middle East, diplomacy with Iran, a mixed strategy to address a rising China, and aggressive efforts to deal with global climate change.

So, on balance, I think Obama gets most of the big choices right with some failures on the margins, most of which are a function of having been dealt unfavorable odds by the Bush Administration in the Middle East. And, as we move in to 2016, the Democratic nominee can and should embrace the strategic accomplishments of President Obama and build upon them because we’re better off than we were when he took office. The global economy is revived and the situation at home is much brighter, the injurious involvements in Iraq and Afghanistan have been minimized, Bin Laden is dead, the Iran deal is in place, the hedging strategy on China has been reinforced, and action on climate is in motion.

What’s Going On in the Sinai?