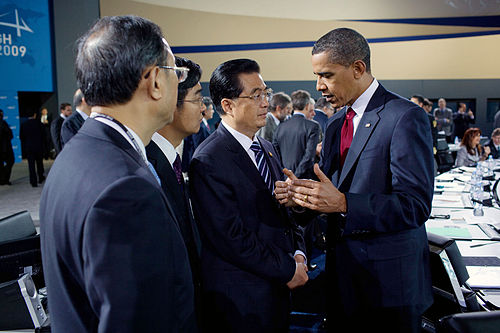 Well, I was supposed to be debating Colin Dueck on the Obama administration’s foreign policy tomorrow, but the residue of last week’s weather took much of the Austin airport out of commission, leaving his flight to be canceled. So, I’m going to be posting my prepared remarks in a series of posts as well as my quick take on Dueck’s 2015 book The Obama Doctrine which sought to critique the administration’s grand strategy and offer up an alternative of “conservative American realism.”

The debate may get rescheduled for the spring, but in the meantime, I thought I’d get my thoughts out there. It’s deliberately somewhat polemical, but I hope in posting it, people are willing to weigh in on my more contentious assertions. I’ll be peppering in some of my sources and inspiration as I go.

Part I: Setting the Stage

I’m here to defend the Obama Administration’s foreign policy achievements in the main, though not every corner. What I thought I’d do is remind us of the terrain when the president took office in order to recognize what has changed during his tenure.

First, President Obama inherited the worst financial crisis since the Great Depression that left millions out of work in the U.S., with major sectors and firms like the auto industry on life support, and a global economy teetering on the verge of collapse.

Second, President Obama took office after possibly the most significant strategic mistake in the nation’s history, a war of choice in Iraq that cost in excess of $2 trillion dollars, that led to squandered blood and treasure, a war that caused the international outpouring of goodwill that the U.S. enjoyed after 9/11 to evaporate, that tore a whole in the unity of the American people, and that left the perpetrator of the attacks of 9/11 on the loose still capable of inciting and possibly directing additional attacks on the US and its allies.

Third, that war of choice, built on false pretenses, saddled President Obama with two wars, both essentially with unachievable missions of putting two Humpty Dumpties back together again, the unenviable projects of state-building in Afghanistan and Iraq.

Fourth, the U.S. despite being bogged down in Iraq and Afghanistan seemed poised through bellicose rhetoric to be inching closer to war with Iran over its nuclear program, potentially enmeshing the United States even further in the Middle East, a region that were it not for oil would have limited strategic importance.

Finally, the Obama administration came in to power when the concentration of greenhouse gases was set to eclipse 400 parts per million, with China overtaking the United States as the world’s largest emitter and with projections that it might reach 700ppm by the end of this century without aggressive action. If that were to come to pass, such a development could lead to catastrophic consequences with average temperature increases upwards on 4 to 6 degrees Fahrenheit, with projected increases at the poles even higher, and a non-zero probability of even higher increases upwards on 10 degrees Fahrenheit. As Gernot Wagner noted, the last time temperatures were 4 to 6 degrees higher, 3 million years ago, there were camels in Canada.

In part 2, I will discuss the strategic inclinations of the Obama Administration when the president came in to office.

The Destruction of Alderaan Was Not Justified