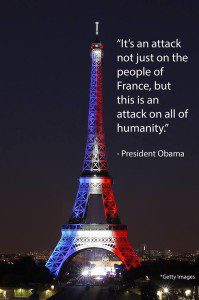 The horrifying events in Paris tonight are almost beyond comprehension. While we don’t know much more than the specific facts on the ground–coordinated attacks, suicide bombers at Le Stade de France, drive-by shootings at a Cambodian restaurant, the massacre at Bataclan, at least 150 are dead–I’ve been thinking all day about this still unfolding tragedy.

It’s still early and we don’t know much about who is involved or why. As with the recent destruction of the Russian charter plane, I doubt that this would be the work of ISIS. I just don’t buy that they’d want countries like France or the US to step involvement in Syria. The coordination and methods seem most like the work of al Qaeda. Many observers have been waiting for al Qaeda to carry out a high profile attack, if only to steal some of the “spotlight” from ISIS who has been dominating the headlines and the recruiting channels of late.

It’s also possible–and I’ve seen some reports supporting this–that it’s the work of so-called “foreign fighters”, French citizens who traveled to Syria for training and combat, only to return under the guise of their passports. States have been worrying about “foreign fighters” for some time now, fearing an influx of dangerous radicals with combat and explosives training who would be able to travel more or less freely due to their status as citizens. The sophistication and synchronization of the attacks make me wary that it could be carried out by a few individuals on their own; if it turns out to be the case, it will likely result in states reevaluating their policies towards those returning from ISIS land. France generally arrests anyone who traveled to Syria, but other countries prefer to screen for risk or try to de-radicalize the returnees.

If it is indeed the work of the ISIS core, it’s going to force the US and the rest of the West to rethink policy in Syria. It seems unlikely that this attack or any others would lead the international community to back off of ISIS.

Again, it’s early. Presumably we’ll know more soon. For now, it’s enough to remember that the world can be a dangerous, terrible place. And that is why we study and teach about dangerous, terrible things. At times like this I think of my students who have gone on to work in government, the intelligence community, those studying security policy at Georgetown or George Washington, and I hope that I have adequately prepared them to face and analyze these threats. 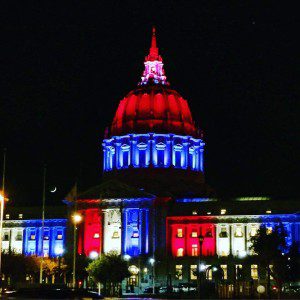 UPDATE: I’m not a Twitter user, but I did find this from Richard Engel of NBC News quoting a US “counter-terrorism” official naming al Qaeda or an al Qaeda affiliate (like AQAP) as the most likely suspect given the level of coordination.

UPDATE 2: French President Francois Hollande is blaming ISIS for the attacks, and ISIS has claimed responsibility. If ISIS is indeed responsible, this attack represents major change in their strategy. The difference between ISIS and al Qaeda has been that al Qaeda focused on attacking the “far enemy” who propped up illegitimate governments ruling Muslims while ISIS focused on building a state right away. Given that focus ISIS had not carried out large scale attacks like this, presumably because they didn’t want states coming in to Syria and Iraq to destroy their territorial control. If it is indeed ISIS it signals a marked change in their strategy and a very scary one. It might be a response to a worsening situation on the ground (although not the recent seizure of Sinjar and Route 16 by the Kurds or the droning of “Jihadi John”. An operation this sophisticated would have been planned well before the events of the past few days, although it’s possible those events do explain the specific timing.). ISIS has depended on territorial expansion and control as a signal of their success; US and coalition air strikes seems to have blunted ISIS’s territorial expansion and even pushed it back in some places, even if they haven’t been able to dent the flow of recruits. If ISIS feels that it is losing on the ground or even not winning sufficiently, it could turn to a more provocative strategy in order to maintain its appeal in the jihadi world. While it’s too soon to say whether France, the US, and other western powers will step up their involvement in Syria, President Hollande has described the attacks as an “act of war” and promised a “pitiless” and “merciless” response.

Sadly, the big winner (if such a word can be used in this situation) might just be Syrian President Assad, who has long been castigating the western powers for ignoring the problem of ISIS and focusing instead on helping rebels unseat his regime. It seems likely that, at the very least, France and other countries currently carrying out airstrikes in Syria will indeed focus more on ISIS, even if it means buoying the Assad regime.

Terrorism and the 2016 Campaign