Bringing Iran in From the Cold 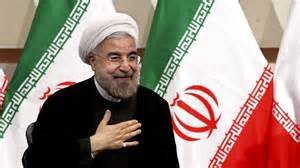 Even as western sanctions are lifted in response to Iran’s dismantling crucial, large-scale elements of its nuclear facilities, critics continue to believe that Iran is preparing to cheat on the nuclear deal, is increasing its support of proxies such as Hezbollah in Lebanon and the Houthis in Yemen, and is bent on achieving regional hegemony. But instead of taking Khamenei at his word, observers should focus on concrete actions rather than rhetoric that is meant largely for domestic consumption. This is especially critical in light of Iran’s upcoming elections, which will likely bring even more revolutionary rhetoric and hardline behavior.

We are at truly historic crossroads. Iran has complied with the nuclear deal in full up to this point, sooner and more comprehensively than expected. A number of Americans unlawfully detained by Iran are now home. And just when it appeared that Iranian hardliners would try to turn the perfect storm of U.S. swift boats errantly breaching Iranian territory into a deal breaker, Iran set the crews free in less than a day (and with all their gear intact). This action bodes well, even as Iran continues adhering to a pattern of “covering” its cooperative actions with seemingly harsh actions.

Why is Iran doing this, in particular when so many experts predicted that after the deal Iran would do the opposite of moderating its behavior? Far from black and white, Iran’s post-deal behavior has been a solid gray. And appearances can be deceiving, such as the large vocal demonstration at the old U.S. Embassy on the 36th anniversary of the Iran hostage crisis—not to mention the Supreme Leader telling his people that “Death to America” is a pillar of Iranian culture. However, the evidence demonstrates that Iran in fact has gradually been tacking in a more positive direction in terms of its net contribution to international order. Upon closer examination, Iran has been deftly balancing its cooperative behavior with a fair dose of uncooperative behavior, though the latter tends to be less consequential than the former. Frequently, a planned positive move is preempted with a negative red herring move, all by specific intention.

At face value, Iran’s behavior appears highly erratic. But upon closer inspection, a pattern is discernible. Subsequent to the nuclear deal signing in July, and after Russia got involved in Syria in September, Iran intervened more deeply in Syria by supplying President Bashar al-Assad with additional military advisors, though with far fewer troops than predicted. Then not long after it signed the nuclear accord, Tehran rapidly passed the approving legislation in its parliament, the Council of Guardians, and by the Supreme Leader but covered this with the conviction of Washington Post report Jason Rezaian of espionage and its first missile test. And just when it appeared that Iran was warming up to the United States, Khamenei issued a dictum in October, saying further negotiations with the United States were “forbidden.” Days later, however, Iran accepted an invitation to join the West in talks over Syria. Shortly after that, Iran launched a wave of cyberattacks.

But there is a method to Iran’s seeming madness. Following or preempting cooperation with doses of defiance allows it to move forward on the nuclear deal while simultaneously appeasing domestic hardliners and keeping up the appearance that it is still standing up to the United States. On top of harsh words for the West, Iran regularly uses hostages, missile testing, and cyber attacks in order to distract attention from each substantial step of cooperation it takes. In accordance with a now established pattern, it was hardly surprising that as its nuclear deal implementation moved forward, Iran conducted a missile test. And as it initiated a significant drawdown in Syria, Iran tested yet another rocket. Iran also ramped up cyberattacks just before the nuclear deal, but toned things down during the actual negotiations when its interests were immediately at stake.

Moreover, since the nuclear deal Iran’s positive actions have outweighed its negative ones. It has dismantled thousands of nuclear centrifuges, shipped 25,000 pounds of enriched uranium out of the country, and disabled its plutonium heavy water reactor at Arak. It complied with a deadline from the International Atomic Energy Agency to provide evidence that it ended the military application of its nuclear program. After a U.S. warship caused an Iranian ship full of weapons intended for the Houti rebels to return to port, Iran thereafter backed off significantly from militarily supporting the Houthis in Yemen. And in November, after the attacks in Paris Iran began cooperating more directly with the United States against the Islamic State (also known as ISIS) via the Shia militias it influences in Iraq. Prior to Russian intervention, Iran also negotiated two different ceasefires in western Syria and, at home, granted civilians greater freedom. Now, it has released five American hostages—through a harmless prisoner swap, which critics again decried.

Iran’s behavior suggests that it plans to stick to the deal, which it took considerable risk in negotiating, because, quite simply, it needs the sanctions lifted in order to heal its moribund economy. Iran happens to be interested in gradually normalizing its relations with the rest of the world, and even in playing a leadership role on the regional stage—but it has been careful to take pragmatic steps, and at a protracted pace. The top leadership paid close attention to the overwhelmingly positive response of average Iranians to both the interim and final nuclear deal signings; it knows its people want greater integration. However, Khamenei will risk neither regime destabilization nor having Iran appear as if it is in the business of giving into the West, so Iran will undoubtedly continue to act defiantly—though with little material consequence.

With important elections coming next month, at first glance it may appear as if Iran has fallen back to its old disruptive ways, at least in the short run. Khamenei is likely to give space to hardliners in order to balance out the recently strengthened moderates led by President Hassan Rouhani and Foreign Minister Mohammad Javad Zarif. In the wake not only of its full compliance thus far with the nuclear deal, and especially now with fresh U.S. sanctions in place in response to its missile tests, we should expect not only more red-hot revolutionary rhetoric, but also occasional bouts of detaining another American or using its own swift boats to buzz U.S. destroyers and carriers in the Gulf or putting regulatory hurdles in the way of American firms seeking to do business in Iran.

The West, and the U.S. in particular, plays a critical role in determining whether Iran will continue to progress toward greater moderation both at home and abroad. For this reason Washington needs to stay focused on sending Iran positive signals to further incentivize moderate behavior. In fact, this is the most important factor influencing Iran’s decision whether to continue or arrest its moderation. The U.S. has already done this by inviting Iran into the top level talks over Syria, and by releasing Iranian assets once it achieved the first round of compliance with the nuclear deal. It could also work with the UN to bring Iran into talks over Yemen. But seeking to punish Iran will directly strengthen the hardliners. As such, it was unwise to proceed with sanctions over Iran’s missile tests ahead of its parliamentary elections, for this was a gift to the hardliners who oppose Rouhani and Zarif.

When Iran’s pattern of sequentially taking two steps forward and one step back occurs, the West may be tempted to lash out in response to the backward step. But the U.S. should resist this temptation, as Iranian defiance characteristically is of little lasting consequence. For example, Iran distracted attention from passing the nuclear accord by convicting Rezaian in standard fashion. Therefore, the proper course of action for the West is to continue strengthening the incentives for Iran to behave responsibility, for this will help to bolster the moderates within Iran as well as counter the hardliners when they take rash but hardly consequential actions. Were the West to begin taking its own hardline stance and thereby force Iran back into the cold, one can be certain that Iranian hardliners, under Khamenei’s approval, will begin to hold sway again.

The first time that Iran missed a chance to distract from taking additional cooperative steps occurred when it not only achieved full compliance with the first round of the nuclear deal, but also rapidly released the U.S. swift boats and freed the Americans it was holding unlawfully. Normally Iran covers its cooperation with some timely defiance. However, on this occasion the stakes for Iran were simply too high to let anything get in the way of being released at long last from the crushing effect of western sanctions. This is why it was premature to go through with new anti-missile sanctions, for this gives hardliners a reason to lash out with the top leadership’s approval. The mere rumor of them was enough, for now we should expect a new round of seemingly menacing behavior ahead of Iran’s February elections.

The second real test of Iran will come after these important parliamentary elections. The West needs to avoid any disincentives that could lead to consequential defiance, which would trigger a tough vote among the P5+1 for snapping nuclear sanctions back in place. Yet the dis-incentivizing anti-missile sanctions move alone could be the catalyst for the next round of menace, so the West should rapidly find additional ways to add to the incentives for moderate Iranian behavior. This is particularly important at this juncture, for Saudi Arabia is proving to be an unreliable ally in this regard.

Defying all domestic criticism in the U.S. of the nuclear deal, Iran has acted contrary to conventional wisdom and gone out of its way not to conform to the straw man image these critics have tried to make it into. Moreover, it has deftly adhered to a pattern of covering up each cooperative step it takes with headline grabbing but inconsequential lashing out. Nonetheless, whether Iran will ultimately come in fully from the cold is still in the balance, for as the moderates make use of sanctions relief and the release of its funds to repair the damage to Iran’s economy, the hardliners will still be a part of the regime and will no doubt resort to additional menacing behavior. Lest the West tempt Supreme Leader to allow them to engage in more than moderate menace, it behooves the U.S. and its allies to remain focused on strengthening Iranian moderates and ultimately to bring Iran fully in from the cold.