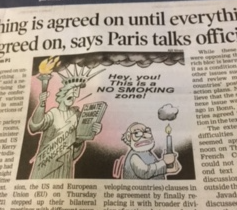 Over the winter break, I spent ten days in India, in the capital New Delhi and Mumbai. I was immediately struck by the awful air quality as I walked out of the airport in New Delhi. Delhi’s air quality is as bad or worse than Beijing’s, though perhaps that fact isn’t as widely known.

The air was visible and thick. I thought my glasses were dirty but then I realized that it was the haze which crept in to the interior halls of the hotel. I couldn’t capture the air quality in a photo but I found a perfect encapsulation reading Tom Hale’s fine book on global governance policy gridlock. I was struck by an excerpt he and his co-authors quoted from Charles Dickens’ Bleak House on 19th century London and the remarkable similarity of its acrid air to India’s:

Fog everywhere. Fog up the river, where it flows among green aits and meadows; fog down the river, where it rolls defiled among the tiers of shipping and the waterside pollutions of a great (and dirty) city. Fog on the Essex marshes, fog on the Kentish heights. Fog creeping into the cabooses of collier-brigs; fog lying out on the yards, and hovering in the rigging of great ships; fog drooping on the gunwales of barges and small boats. Fog in the eyes and throats of ancient Greenwich pensioners, wheezing by the firesides of their wards; fog in the stem and bowl of the afternoon pipe of the wrathful skipper, down in his close cabin; fog cruelly pinching the toes and fingers of his shivering little ’prentice boy on deck. Chance people on the bridges peeping over the parapets into a nether sky of fog, with fog all round them, as if they were up in a balloon, and hanging in the misty clouds.

The air pollution in Delhi was like this and underscored for me that the strongest impetus for action to deliver climate benefits will come because people in major cities across India such as Delhi, Lucknow, and Ahmedabad demand cleaner air.

While I was in India, the final days of the climate negotiations in Paris were going on, which made for interesting conversations with local think tank and NGO reps.

As I argued in my Monkey Cage piece in December, the outcome in Paris was pretty obvious going in – an inclusive bottom up agreement of country pledges and a process of periodic review. Some of the details — in terms of the start of the first review period and when country pledges would be updated — emerged out of the negotiations but the overall architecture was pretty much as I anticipated.

I kept my eye on Paris while in India for Current History, which published my hot take on the conference in its January issue. Like Jarrod,  I see Paris as a successful departure from the top down treaty approach of Kyoto that had become an anachronism as China and India’s emissions grew and important countries like the U.S. remained outside.

Now that we have this new regime of bottom up commitments, embodied by the Intended National Determined Contributions (INDCs), much of the action now moves to what happens in key countries like India whose emissions under business as usual scenarios are projected to ramp up dramatically.

Going in to Paris, the Indian government’s perspective was that other countries industrialized first and polluted the air and thus bear the lion’s share of responsibility for cleaning it up. Moreover with hundreds of millions of Indians with no access to electricity and others with only irregular access, India needs additional carbon space to grow.

Still, India announced as part of its INDC ambitious targets to scale-up non-fossil energy, particularly solar energy. As my co-author Sarang Shidore and I wrote for the Council on Foreign Relations in December, it is going to be extremely challenging for India to meet these commitments.

Those close to the Indian government like Arunabha Ghosh who take seriously the climate threat are pushing for new partnerships that would help India scale-up renewables. Already, India has announced the creation of a new multilateral organization, the International Solar Alliance. In a conference I organized last year with the Stanley Foundation, Ghosh argued for other partnerships (such as on energy storage) where technological breakthroughs and finance could help countries like India overcome some of the domestic obstacles to renewables scale-up.

Air Pollution and the Co-Benefits for Climate

We often talk about climate change policy producing co-benefits for other areas and concerns, as if climate is the primary driver of policy. However, as Sarang Shidore and I argue in a piece we wrote last year on China for the Paulson Institute, that logic has it backwards: dirty air creates demand for policies that potentially produce co-benefits for the climate.

In India, Delhi’s air quality has created a political opening for the local government to enact a 15 day experiment of an odd-even driving scheme, limiting drivers to certain days of the week based on the numbers on their license plates.

As Arunabha Ghosh’s institute has documented, it’s unclear if the policy is working. The sources of air pollution of particulate matter (so-called pm2.5) include many other sources, some of which may be more important than commuter vehicle exhaust, including commercial diesel truck emissions, dust from building construction, power plant emissions, and burning of agricultural waste.

But, as Johannes Urpelainen notes, it may not be as important just yet if the policy works. Rather, the local government has put down a marker that this is an area for policy, and public expectations will likely drive further innovation in this space. While New Delhi as the country’s seat of government provides a special sort of pressure for action in the same way that Beijing does, other cities in India are also polluted and may face similar demand for action. Together, the demand for cleaner urban air could lead to a variety of policies that produce climate co-benefits.

Not all policies intended to reduce air pollution will produce co-benefits for climate (relocating coal burning power plants further away from major cities for one wouldn’t). Still, concerns about air pollution may be a far more potent driver of policy innovation to support renewables, fuel efficiency, and mass transit than climate ever would be on its own.

From my vantage, the analytical challenge going forward includes corroboration of this proposition, that approaching countries like China and India to work on improving air quality (with an eye towards production of co-benefits for climate) will be more successful than emphasizing climate policy for its own sake.

At the same time, however the policies are justified or framed, one also has to have a clear-eyed assessment of the relative feasibility of policy adjustments that would mitigate greenhouse gas emissions in different national contexts. As Sarang Shidore and I have explored in work currently under review, some sectors in India are easier than others for emissions mitigation.

Finally, to the extent obstacles are identified, the question then becomes what steps can be taken by actors, domestic and international, to overcome them. Are there past analogues in the diffusion of technology that can provide some guidance to answer this question?

What’s clear is that both practitioners and scholars have their work cut out for them.

Speaking Truth to Power: A Response to Walt’s Lamentations