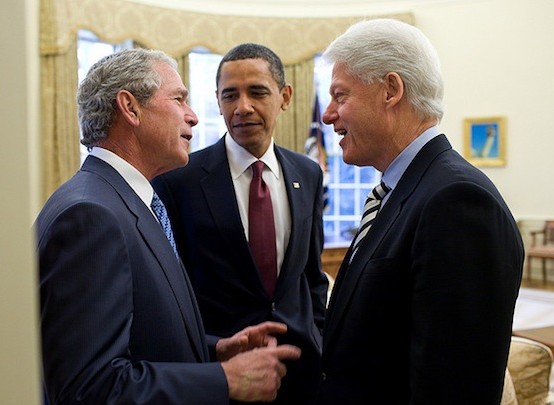 Speaking Truth to Power: A Response to Walt’s Lamentations

This is a guest post from Eric Van Rythoven and Ty Solomon. Eric Van Rythoven is a PhD candidate at Carleton University studying emotion, world politics, and securitization. His work is published in Security Dialogue and European Journal of International Relations. Ty Solomon is a Lecturer (Assistant Professor) in the School of Social and Political Sciences at the University of Glasgow. He is the author of The Politics of Subjectivity in American Foreign Policy Discourses (2015, University of Michigan Press), and articles in International Studies Quarterly, European Journal of International Relations, and Review of International Studies, among others.

Two weeks ago, one of IR’s most respected and publicly visible intellectuals wrote a piece lamenting the absence of realist voices in American foreign policy discourse. In case you missed it Stephen Walt’s piece is worth reading in full, but here’s the money quote:

why is a distinguished and well-known approach to foreign policy confined to the margins of public discourse, especially in the pages of our leading newspapers, when its recent track record is arguably superior to the main alternatives?

Most of the praise (and snark) has sunk to the bottom of Twitter, but you can still see some of the popular responses here and here. As two academics who study realist political advocacy and American foreign policy discourse, we agree with Walt that realism is marginalized in public debates, at least in comparison to liberal internationalism or neoconservatism. But we’re also struck by how this discussion has missed the one of the most obvious answers as to why.

Realist discourse is marginalized because it’s not powerful.

Realist discourse, at least the brand embodied by Walt (and Mearsheimer), is not prominent because it is not politically potent. It fails to attract large followings, or influence political elites, or shape the framing of public policy, especially when compared to major competitors. Answering Walt’s question then becomes about understanding why one political discourse succeeds and another fails. The irony is that Walt has longed eschewed the idea that discourse can be politically potent, and dismissed efforts to research such questions as “prolix and self-indulgent discourse that is divorced from the real world” (Walt, 1991:223). Ouch. Yet this position is conveniently ignored when he asks the question of why realists have no potent political voice.

Our argument is simple. If we want to understand why realist advocacy is politically anemic, we need to appreciate two things: why there is a problem with their current model of discourse, and why certain discourses are more powerful than others.

First, when folks like Walt talk about foreign policy debates, they do so in terms of the ‘marketplace of ideas’. This is an economic metaphor for public debate which closely coincides with the neorealist style of reasoning modeled on markets and economic behavior (Waltz 1979; Grieco 1988). In Kaufman’s terms the “marketplace of ideas helps to weed out unfounded, mendacious, or self-serving foreign policy arguments because their proponents cannot avoid wide-ranging debate in which their reasoning and evidence are subject to public scrutiny” (2004:5).

Nowhere is the marketplace of ideas more important for Walt than his (and Mearsheimer’s) criticism of threat inflation. In this view the public and elites “are envisioned as investors and exaggerated threats are akin to an overvalued share price that would plummet if investors just had the right information” (Van Rythoven, 2015:5). For Walt the goal of realist advocacy is to provide the right information – to correct “distorted history and faulty logic” (Mearsheimer and Walt, 2003:52) – because this is what allows audiences to recognize how inflated threats distort the market.

The problem is that this is exactly the liberal model of public discourse that realists have historically chastised as utopian and naïve. Carr gave us the classic critique in presuming that time and evidence will lead rational actors to deliberate and eventually agree on an underlying ‘harmony of interests’. In this view ideas – such as a threat assessment of Iran – have an objective value that can be discovered and agreed upon simply if it faces enough scrutiny. But in foregrounding efficient economic reasoning, the market model spurns questions of power. In an idealized debate modeled on economic exchange there is no consideration of different sources of discursive power – identity, authority, gender, emotion, affect, ritual, images, aesthetics, memory, trauma, fantasy, and so on. When these do enter the discussion, they are seen as distortions, anomalies or deviations from what would be ideal.

However, as any student or even casual observer of foreign policy will tell you features like emotion and identity are not abnormal distortions of public debates. They are pervasive and recurrent features of how discourses work. From this point of view there is little ‘realism’ to the marketplace model. It appears as a deeply aspirational, even utopian ideal which appears plausible only if we can engage in a form of politics without power.

What then makes discourse powerful?

This leads us to our second point. IR scholars have long emphasized that language isn’t merely descriptive of the world, but instead actively constitutes it as meaningful. For example, the way we talk about ‘threats’ in international politics is not simply description of an objectively existing threat. Rather, such language actively constructs threats by producing boundaries between “us” and “them.”

Here we take a step further. We follow scholars who contend that language is constitutive (and not just descriptive) of the political world. Yet, we also want to suggest a reason why language (words, narratives, discourses, etc.) resonates with audiences, why it often grips us on a visceral level. Yes, politics is socially constructed, but we contend that security narratives also elicit and fulfill a range of emotional functions. Language evokes emotional identification and feeds upon emotional reactions because it often fulfills images or ‘fantasies’ about who we think, or like to think, we are.

What do we mean by ‘fantasy’? Not fantasy in the conventional sense of daydreaming, but rather a sense of self-understanding that encompasses not only an “us vs them” notion of identity, but also a narrative that obscures the fundamental ambiguity of all identity. Even if linguistically-constructed identities are ultimately unstable, most people need meaningful stable identities. That is, most people have an emotional desire for the kind of stability that dominant political narratives often offer. Such narratives produce a sensible, bounded “us” in reference to a “them.” Yet they also link our identity to a fantasy not only of who “we” are, but of who we could be, if we follow through with the fantasy. Some political narratives are much more adept than others at eliciting and channeling such desires.

Donald Trump does this – with no small effect – when he shares the fantasy of making America ‘great again’. Those discourses that resonate widely will likely be those that more effectively obscure the ambiguity of identity and offer a plausible narrative for not only which “other” is to blame, but also what “we” will “reclaim” for ourselves which seems to have been “lost” in our current crisis (our “founding principles,” “true freedom,” a “unified society,” and so on). Such promises to recoup some (ultimately imagined or illusory) “lost” part of ourselves play a key function in emotional appeal. In this sense, examining the overlap between narratives, desire, and emotions can help to account for how some narratives are more politically resonant than others.

Take an example that Walt mentions: neoconservatism. During the run-up to the 2003 Iraq war, realists and neoconservatives debated whether the US should invade. Neoconservatives both inside and out of the Bush administration put forth a number of assertions about Iraq’s alleged weapons of mass destruction and ties to terrorists to justify US military action. Realists publicly countered neoconservative claims with measured arguments for why Saddam’s Iraq did not pose a threat to the US.

Yet, realists failed to make sufficient headway against neoconservative drumbeats. As Schmidt and Williams (2008) point out, realists failed to adequately challenge neoconservative pronouncements of a great nation fighting tyrannical villains because of their limited articulation of the “national interest” and their failure to connect it to prominent values and identity politics. We follow Schmidt and Williams’ insights here, but also further unpack the “symbolic and political resources” (2008: 194) that they attribute to neoconservative rhetorical success. Indeed, realists emphasize power politics among states but consistently fail to appreciate the power politics of language. Neoconservatives’ mobilization of identity politics and emotion (and realists’ eschewing of such factors) helps to account for realists’ rhetorical ineffectiveness, despite their public positions as otherwise plausible interlocutors. Indeed, neoconservatives offered discourses of a collective “us” that not only suffered a traumatic wound on 9/11, but also a fantasy that elicited emotional identification with a “war on terror” that both evoked a “loss” and the promised recovery of our “true” identity (as opponents of evil, promoters of freedom, etc).

To parse this argument in perhaps more familiar terms, different constellations of emotions, desires, identity, and language create different distributions of power among discourses. Yet it is this underlying distribution of power which a liberal model of the marketplace of ideas ignores. Ultimately, we’re sympathetic to Walt’s call for a greater diversity of views in American foreign policy debates (though a decisively realist foreign policy may not be as benign as he suggests). But any attempts to widen such debates may go awry without a better understanding of the power politics of discourse.

Programming Note: Symposium on Structural Power and the Study of Business