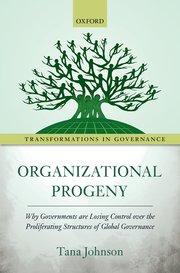 The Agency of Multilateral Organizations

This is a guest post from Tana Johnson, an Assistant Professor at Duke University’s Sanford School of Public Policy. I had the pleasure of editing a reviews exchange on her important new book, Organizational Progeny. The exchange just came out in the latest issue of International Politics Reviews and features reviews from me (Josh), Tanisha Fazal, and Alexandru Grigorescu, as well as a response from Johnson herself. Ungated access here.

I’ve recently returned from Geneva, home to scores of international intergovernmental organizations (IGOs). It’s an intriguing place: unlike New York, which is overrun by international politics for a just a few weeks each autumn,  in Geneva international politics play out on every corner, on every day. The city is a hub for international policymaking in health, trade, human rights, labor, and countless other issue areas. So, can the IGOs that operate there, and elsewhere, act independently of their members? Or are they simply robots, mechanically doing what states want?

To tackle that question, it’s important to distinguish between two main types of actors inside IGOs. International bureaucrats staff the organization; government officials use the organization. The latter find it especially difficult to operate as a unit. Government officials are divided by their stake in their respective home-states and by their frequent attraction to unilateral policy approaches. Meanwhile, IGO staff certainly don’t always see eye-to-eye, but they are united by their stake in the IGO where they work and by their desire for multilateral policy approaches. The relevant question then becomes: can international bureaucrats diverge from the wishes of member-governments?

In Geneva, the answer often hinges not on whom you ask – but where you ask. If you’re in the offices of an IGO, the usual answer is, “international bureaucrats serve in organizations that are by definition inter-governmental, driven by and accountable to member-states.” But if you’re outside the office, and you pose the question to national officials or IGO staff, you’ll generally get a very different answer: “Yes of course, and here’s how…”

The Power of International Bureaucrats

You’ll hear many personal accounts, proving that international bureaucrats can diverge from the wishes of member-governments. But is it on a regular basis? And even if it is, is there really any lasting impact?

I’ve examined this during the past few years, finding fascinating shifts. Traditionally, national governments have constrained international bureaucrats in lots of ways. Many start at “time-zero”: when designing IGOs, government officials try to insert a variety of mechanisms (such as vetoes, oversight meetings, or control of financing) that will help them steer, monitor, or reverse bureaucratic activities well into the future.

But things have changed. States used to monopolize the process of designing and launching intergovernmental organizations. Over the past several decades the monopoly has cracked, and instead international bureaucrats regularly play roles in creating “progeny”: IGOs that are offshoots of existing IGOs. With a mix of case studies and data analysis, I’ve found that organizational progeny look different than IGOs created by states alone. Specifically, they exhibit more insulation from states’ interference, because they are less likely to provide vetoes and other formal mechanisms that states can use to control IGOs.

This is an empirical regularity seen over and over in institutional design processes – including for prominent progeny such as the United Nations Development Program, Intergovernmental Panel on Climate Change, Joint United Nations Program on HIV/AIDS, International Energy Agency, and World Food Program. And the pattern holds even after encompassing counter-arguments – such as the possibility that IGO progeny arise in situations where government officials don’t care as much, or where they wouldn’t be able to easily control things anyway.

This pattern adds up to a fundamental – and institutionalized – shift in the global governance structures in which states pursue international politics. Because their traditional control mechanisms are dampened in a significant portion of the IGO population, states are quite literally “losing control” over the proliferating structures of global governance.

Score one for international bureaucrats. But of course, things don’t stop there. IGO staff exhibit acuity, subtlety, and resourcefulness. Government officials do too, and we can see them experimenting with a variety of means for reasserting control over bureaucratic activities. For example, consider wealthy states’ increasing use of earmarked voluntary funds in the United Nations system and the World Bank. This reveals a reality of international politics: the push-and-pull between government officials and international bureaucrats who are constantly trying to influence and renegotiate the nature of their relationship.

Are These Developments a Good Thing?

For regular people like you and me, is that a good thing? Wouldn’t it be better if international bureaucrats just faithfully pursued the wishes of member-states?

In some key ways, no. For one thing, it’s tough to say what states really want. Sometimes government officials don’t know; sometimes they can’t agree. Even when they do figure out what they want, they often insist to the public that they want something else. Suddenly, international bureaucrats’ ability to circumvent some of the confusion doesn’t look too bad.

For another thing, states are predictably – and quite sensibly – parochial in what they want. They aim to defend the interests of people (though not necessarily ALL people) within their borders. National governments are often forthright about pursuing focused interests; when they deny having such a focus, we should think twice. Certainly international bureaucrats can operate in a self-interested way too, but their interests often revolve around addressing particular policy areas instead of protecting national prerogatives. And whether we’re talking about opening up markets, reducing carbon emissions, protecting intellectual property rights, or fighting HIV/AIDS, regular people sometimes find that their policy priorities are better reflected by the international bureaucrats who work across national borders than by the government officials who work within them.

In short: just as competitive politics and checks-and-balances are widely considered desirable at the domestic level, they have a role to play at the international level too. That’s especially true on a crowded planet where many of our most severe problems and most treasured aims don’t neatly coincide with lines on a map. Seen this way, international bureaucrats inject healthy competition in international politics, making it less likely that national government officials will grow too complacent or narrow in speaking for the interests of the public.

So yes, international bureaucrats can diverge from the wishes of member-governments. And for regular people like you and me, there are some very good reasons to welcome the dynamism, competition, and push-and-pull that this injects into international politics.

What Role for Non-State Actors in the New Climate Governance?