The Structural Power of Business as a Causal Hypothesis

This is a guest post by Kevin Young, Assistant Professor of Political Science at the University of Massachusetts Amherst, as part of the Duck of Minerva’s Symposium on Structural Power and the Study of Business. This post draws on ideas developed at greater length in Young’s article found here. Links to other posts in the symposium can be found here.

We live in a civilization populated by an organizational form that has replicated itself throughout the world with incredible speed, voracity and flexibility. It might be the organizational form of our age. This organizational form organizes the wealth that society produces; its decisions determine whether people eat or starve; its machinations influence what kind of society is possible. Every large-scale policy must confront and engage with it. Indeed, most public policy is squarely focused on shaping its behavior. The greatest human talent of our age is subsumed within it and directed for its purposes.

IR scholars like to think in such terms when they talk about the state. But the modern firm is equally apt to fit the above description. We live in an age of tremendous capital mobility, of colossal transnational firm structures that dominate every advanced economic system.

In such a world, it is striking that scholars of power and governance – by which I mean political scientists, sociologists and public policy scholars – often neglect to examine the structural power of business. When we consider business power in our analyses, it usually comes in the form of traceable lobbying activity. Thinking about structural power necessarily entails considering material structures, and this goes against many powerful intellectual movements that have shaped the way we conduct political inquiry over the last several decades, from the emphasis on individual actor agency and behavioralism to post-structuralism in critical theory.

A number of scholars have recently fought against these tendencies (such as here and here and here) with smart qualitative empirical interventions. Recent studies are digging down, in a context-rich way, to understand how policy is being made (or not made) in light of business’ operational control of the investment function. Yet rather than talking about ‘market forces’ or even business as such, recent interventions are getting really specific about the kinds of actors they are talking about in relation to structural power.

In particular there has been a lot of focus (for example here, and here and in the special issue related to this symposium here) on the financial industry, and even individual individual financial firms being structurally powerful in a specific context, and not so much ‘business as a whole’. Even very encompassing arguments about the power of ‘capital’ (as a noun) tend to narrow their empirical focus on fractions within it, for example on ‘dominant capital’ or the ‘financial fraction of capital’.

First, if we are going to be specific about investigating specific sectors of the economy, such as ‘the financial sector’ or individual firms like ‘big banks’, we cannot rely on the normal language of structural power to describe these entities’ resources or importance in the economy. That’s because we can’t always simply assume that resources are power. Neither is ‘importance in the economy’, for that matter. Making such assumptions and calling certain firms or industries structurally powerful based on their standing in the economy is causally spurious. Structural power is a conjecture about a hypothesized causal relationship – one between differential dependence of one actor (policymakers) on another (business, in this case some subset of business). As such, claims about the structural power of any specific entity need to be validated with evidence of a plausible causal effect on a policy outcome.

I propose (in this special issue here) we call the things that we think might engender structural power “structural prominence”, which is different from structural power itself. Prominence is an inherently positional concept, and that is appealing because it conveys a situation of standing and differential interdependence that is at the heart of the structural power concept, but which does not presuppose a given outcome. Talking about prominent industries or firms allows us to talk about what the anticipated effect in policy outcomes actually is or is expected to be.

The second consequence of sub-setting the structural power of business to a given industry or firm is that it requires us to assess which kinds of firms, and which kinds of industries, are actually prominent. When we’re talking about ‘business as such’ as in the traditional concept of the structural power of business, measurement issues aren’t as acute. We can be abstract because, well, business is visibly everywhere, and the state is visibly dependent on its activity. We can’t do this so easily when it comes down to examining ‘the structural power of finance’, however. We need to get serious about measuring elusive relational phenomena. 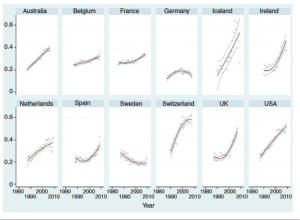 As I argue in this article, simple measures of sectoral composition, such as the ‘financialization’ measures I propose (based on publically available data from the OECD’s Structural Analysis database), may be useful in the case of analyzing the structural prominence of the financial sector within a given country or across multiple countries. We can use such measures of prominence to test empirical conjectures about the structural power of the financial industry, across time space and context. Some recent interventions (here and in the present symposium here) that use network analysis are also likely to be useful when considering the financial system as a truly interconnected, global system.

The rather creepy-looking structure below, perhaps a bit reminiscent of the ‘eye of Sauron’ (incidentally also the nick-name of a galaxy in our universe and the nickname of the beautiful Helix Nebula) points to another way of demarcating prominent firms. This is an ownership network. Each node is a firm and each tie (connecting line) represents a relation of ownership, based on the largest 50 sharedholders of the largest 500 non-financial corporations in the US (thanks to Stefano Pagliari for access to the underlying data). Corporations often own little bits of other corporations. This is of course well known. But what is less well known is how wildly asymmetric these relationships actually are (though there have been some exciting recent interventions here and here that analyze these kinds of properties systematically). Represented as a network, these relationships take on this kind of structure because such a network has ‘scale free’ properties – there are some firms that are extremely central in this network (sometimes called ‘hubs’), with the vast majority being much central in the network. This facilitates our attempts to measure just which firms are prominent and which are not in a given setting and point in time. 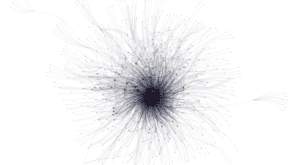 Of course, selecting individual firms or small collections of firms that are highly prominent can be challenging, and we don’t always have access to awesome network data. Nor is ownership necessarily the right relationship in many circumstances. Yet as I argue here, the power-law-like distribution of firms in actually-existing capitalist economies allows us to spot which individual firms are likely to get their preferences anticipated through policy if the structural power hypothesis holds. A relatively small number of firms tend to stick out of any distribution of size, whether or not that is measured by employment, revenue, or assets. An example of this is in the two figures below, which ranks the largest firms in the world, measured by total assets. The figure on the left takes the top 10,000 firms in the world; the figure on the right takes the largest 1000. Spot the difference? There difference in the distribution shape is barely recognizable because firms at the top end are simply so much more prominent than others. This property of modern firm size or importance distributions is enabling because it allows us to select firms which are prominent, and therefore should have their preferences accommodated in policy outcomes, thereby actually testing the structural power hypothesis in whatever context. 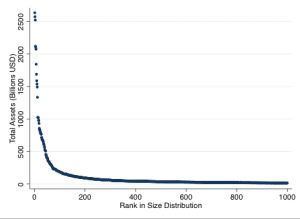 Treating structural power as a causal hypothesis not only entails improving the language we use and getting more serious about actually measuring prominent firms and industries. We need to get serious about subjecting the structural power to empirical tests. Scholars have been studying variation in policy outcomes for a long time, and thus data on the outcomes that prominent firms or industries are meant to produce aren’t going to be too difficult to come by. The hardest part is getting our heads around the fact that an actor can be structurally prominent in an economy but not always structurally powerful. As sexy as the structural power hypothesis is, sometimes it gets empirical support and sometimes it does not.

No Escape from Uncle Sam