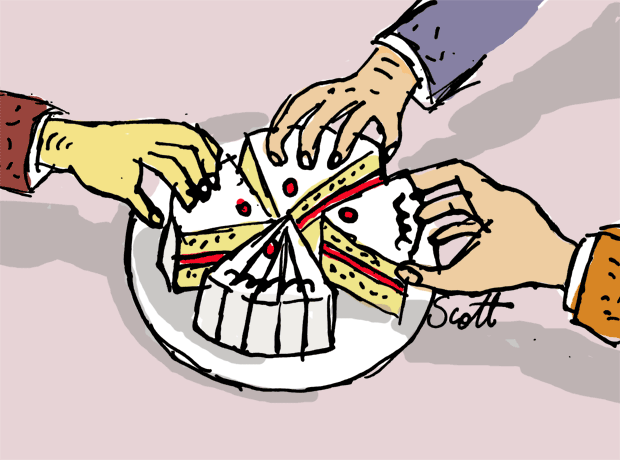 Why do some transnational advocacy movements have more success transforming global markets than others? Can we look to look to differences in market structure for a preliminary account? Why were AIDS advocates able to achieve extended access to antiretroviral medications for millions of people while climate campaigners have struggled to achieve comparable gains?

This week, International Studies Quarterly published an early access and ungated version of my article with Ethan Kapstein where we examine how the structure of markets shaped the differential scope for climate and AIDS advocacy. (This is an extension of our 2013 book AIDS Drugs for All which had a broader focus on movement organization and agency.)

In brief, we argue that four factors of the industry opportunity structure facilitate market transformation: (1) the number of product markets, (2) the degree of global integration (3) market concentration and (4) the source of rents. In this post, I thought I’d walk through the logic we develop in the article and some of the issues that I think merit further research. (I developed some of these themes in my remarks at last fall’s APSA pre-conference workshop on markets and politics).

The Argument in Brief

Our argument harkens back to the important work on collective action from Mancur Olson, Todd Sandler, Ken Oye, among others. We think about the number of players involved, the number of different pieces of the market that have to be changed, the degree of integration of those markets, and whether the source of profits the industry gains are more a result of natural monopolies or socially constructed rents derived from preferential rules or brand reputation. Our general conclusion is in keeping with notions that if your goal is to change global markets, then from a collective action point of view, the scope for transformation is more feasible when you have to change fewer product lines, when markets are globally integrated, when there are relatively few producers or buyers, and if the source of profit comes from policies (such as intellectually property rights or brand reputation) which are more subject to human agency than barriers to entry such as high capital costs.

We argue AIDS advocates were more successful in part because the number of product lines was relatively limited, the markets though initially fragmented came to be more globally integrated, the number of producers involved was limited, and the source of rents for the sector increasingly derived from intellectual property rights and brand reputation rather than technical or scale barriers to entry.

By contrast, climate advocates have to change an array of different product markets, all of which contribute to climate change. 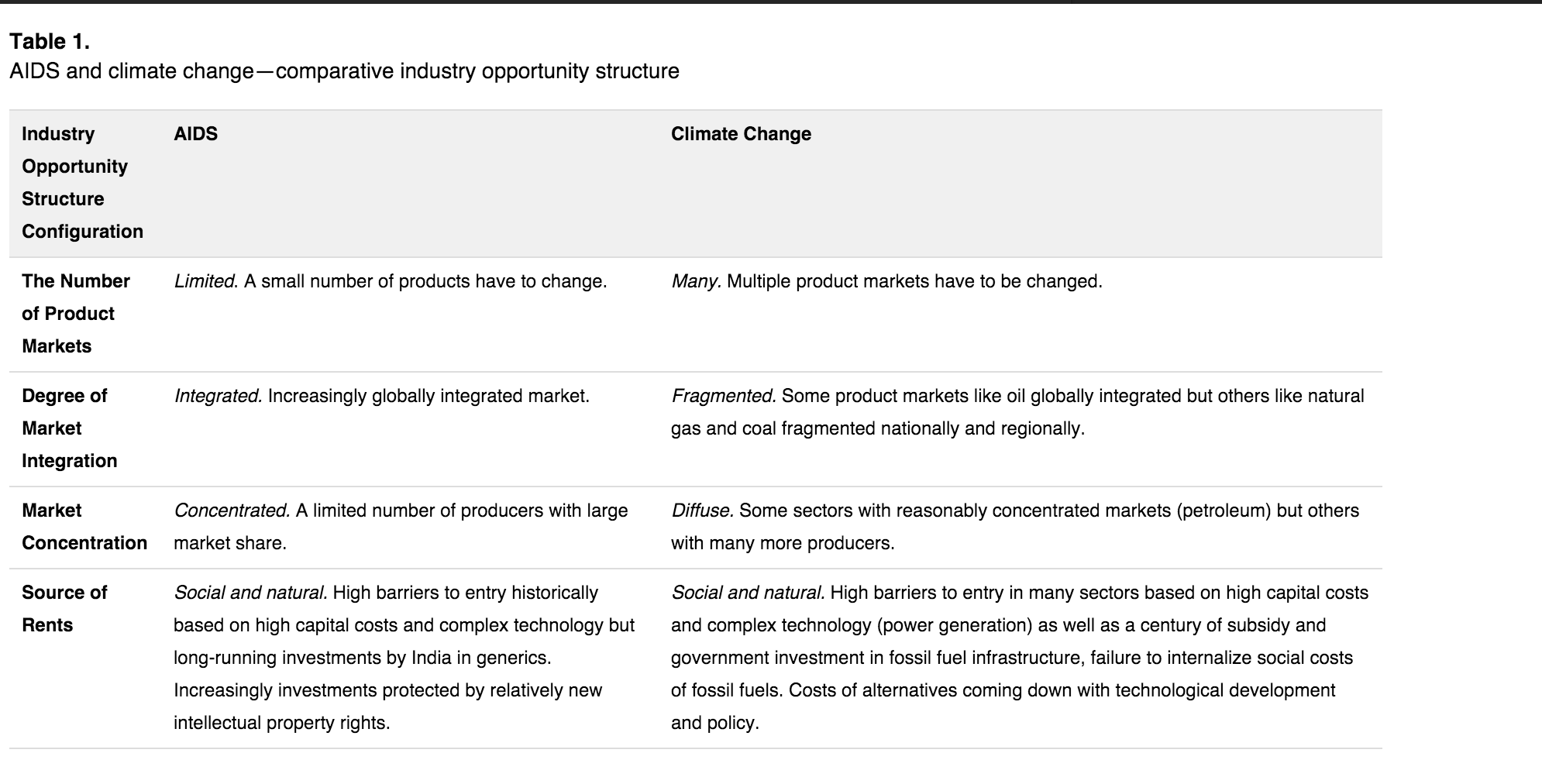 These markets tend to be segmented and only weakly integrated globally (think of natural gas and coal), which requires serial change in lots of different national polities. In addition, by contrast with the handful of firms that make AIDS drugs, there are some markets that are responsible for products that produce greenhouse gases that are extremely fragmented (such as agriculture) while others are merely more fragmented than the AIDS drug market.

The collective action costs of organizing many small producers is, all else equal, more onerous than getting a few market actors to agree to change their behavior. In oligopolistic sectors where there are supra-normal profits, market actors can conceivably acquiesce to social movements demands and incur costs where more competitive sectors may not have the luxury (i.e. profit-margins) to absorb additional costs. In terms of the source of profits in the market space that generates climate problems, the natural monopolies and technical barriers to entry that made it a challenge for renewables and other greener technologies are finally being overcome. Still, as we argue, the rules that reward incumbents in the energy space are more embedded infrastructure and policy compared to the pharmaceutical arena where IP protections are of more recent creation (see Table 1 above from the paper for a side by side comparison of our assessment of AIDS and climate).

This doesn’t mean that climate advocacy is hopeless just that the structural constraints actors face are more severe than those faced by AIDS campaigners. What’s more, this can lead to more productive advocacy, focusing on concentrated sectors, nodes of decision-making or at least a more explicit understanding of the obstacles to success.

Market Concentration and Transformation: A Counter-Intuition

The market concentration piece of this argument is perhaps the most controversial. The implication is that market transformation is, all else equal, if there are fewer players. The challenge is that with market concentration comes political power so that if a handful of actors are implacably opposed to change, then they can use their structural power to resist transformation. This challenge could be more severe if transnational movements’ demands pose an existential threat to market actors. It’s one thing to ask pharmaceutical companies to change their pricing policies to facilitate access to a good, it’s quite another to demand that a sector cease to exist (say the coal sector or fossil fuels more broadly). Market actors may resist the former quite more fiercely than the latter (though companies facing existential threats due to policy or technological change can reconstitute and diversify from being, say, coal companies to being energy providers).

Still, I think the observation that from a collective action perspective, concentrated markets can be changed more quickly than fragmented diffuse ones is apt (akin to the observation about few veto players versus many from Tsebelis and others). Whether or not they do is subject to other factors. In any event, we think this style of analysis, looking at market structure at the sectoral level rather than just governmental actors as the targets or individual firms is ripe for future scholarship. We hope that our contribution initiates (more likely feeds into existing) vigorous debates in the field.