Why is Paypal Blocking Aid to Syrian Refugees? 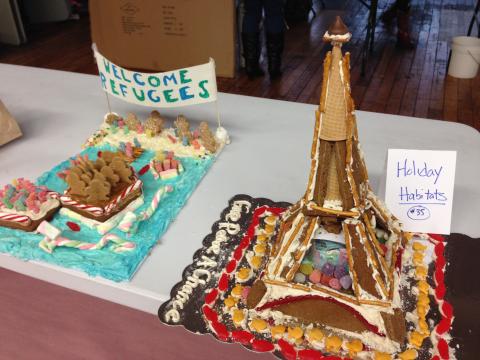 Our prize winning creation, on left.*

Last December, on “Giving Tuesday,” I encouraged friends and family to send donations to three of my favorite charitable causes in lieu of birthday presents: low-income housing, domestic violence, and Syrian refugee relief. My son and I had signed up to compete that week in the Habitat for Humanity Gingerbread Build (see our prize-winning creation in the photo!),* the Safe Passage 5K run, and a UMass benefit dinner for Syrian refugees being organized by the student Amnesty International chapter.

Safe Passage had an online portal for collecting donations, but for the two other organizations we collected money directly from neighbors, family and friends, and turned it in to the non-profits directly. And of course, since many of our family and friends don’t live in Amherst, we also used Paypal as a crowd-funding portal.

A few days later, one of my sisters received a sinister note from Paypal, demanding to know about the transaction labeled “for Syria.” (Paypal did not question any family members who sent donations through the site to support Habitat for Humanity.)

My sister answered all of Paypal’s questions politely and referred Lawrence, the Compliance Officer to me. I immediately explained to Paypal all the relevant information about my sister’s gift to me, and where the money had gone, mentioning not just the student organization at UMass but also the humanitarian organization, Jusoor Syria, a US-registered non-profit based in Michigan, to whom the student group had said they would pass our donation.

Nonetheless, Paypal has suspended my account and seized my sister’s $50 gift to me, pending my “cooperation” with their “investigation” into whether I may be “buying or selling goods or services that are regulated or prohibited by the U.S. government.” What they have said they want me to do is track down an official letter from Jusoor Syria, stating that I am authorized to collect money on their behalf (even though I was technically collecting money on my own behalf, and gave it to a student group, not to Jusoor Syria directly).

Currently, as documented over at Lawyers, Guns and Money, I am refusing to cooperate with this request – it seems unethical to demand that a humanitarian NGO divert its attention from assisting war-affected civilians to accommodate a policy that appears to be based on racial profiling, and I won’t be part of that. Instead I have asked Paypal to justify its intrusive behavior on the basis of some “reasonableness” criteria governing its right to review user transactions. To date, I have not yet received any kind of answer to my questions from Paypal’s Resolution Centre, nor has Dan Schulman, Paypal’s CEO, replied to my tweet.

Based on their official correspondence plus some online research, here is my best and most charitable sense of what is going on – all of which raises some very fascinating questions in terms of contract law, administrative law and national security law.

Without further information from Paypal on its policy, it is hard to determine whether or not its actions are indeed reasonable or constitute an undue burden on its users – and on the recipients of its users’ generosity, who have better things to do (namely refugee relief) than cater to Paypal’s bureaucratic demands. For now, in the context of a massive humanitarian crisis and grossly underserved refugee population, it is fair to say that this behavior seems uncharitable at best. Sanctions against Syria were meant to prohibit transfers to the Assad regime and its supporters, not to penalize US citizens for assisting Syrian victims of that regime’s brutal policies.

What we have here, it seems to me, is a corporation governing the humanitarian impulses of private citizens in a way that disincentivizes pro-normative behavior. I’m not sure what the appropriate ethical or legal response is to such acts, but my best course of action right now would appear to be civil disobedience of Paypal’s User Agreement, which technically requires me to “cooperate” with Paypal’s “investigation” in a manner which would pose an undue bureaucratic burden on a humanitarian organization now occupied with a massive crisis.

So that’s where that stands. It is certainly an interesting case study of transnational “governance.”

*Liam’s team  also won a prize for “Most Donations Collected” for Habitat for Humanity. Paypal did not harrass us for our Habitat fundraising, but they did block my account for a separate fundraiser for Syrian refugees.

Is it possible to be a realist?