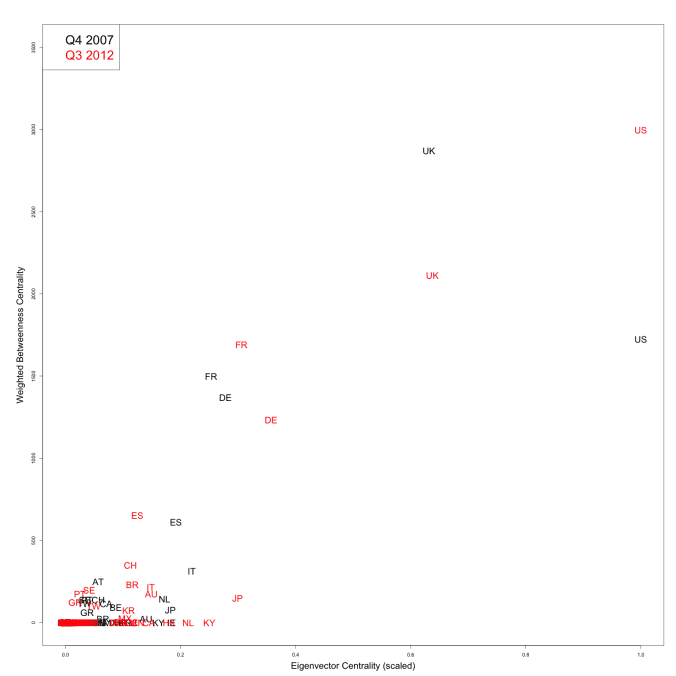 Why Is the U.S. Still So Important in the Post-Crisis Global Financial System?

This is a post by William Kindred Winecoff, Assistant Professor of Political Science at Indiana University Bloomington, as part of the Duck of Minerva’s Symposium on Structural Power and the Study of Business. This post draws on ideas developed at greater length in Winecoff’s article found here. Links to other posts in the symposium can be found here.

A curious thing has happened since the global financial crisis: all of the rising powers that were ostensibly going to challenge the postwar American hegemonic project have taken significant steps backwards, while the U.S. has recovered much more smoothly than many predicted. Indeed, the political economy problems within unified Europe and the formerly-booming BRICs (Brazil, Russia, India, and China) appear to be deepening further, while others who had resisted the U.S. project, or been ambivalent towards it, are facing new problems of their own: this is especially true of “Pink Tide” left-populists in Latin America – who are suffering from the unraveling of the same commodities supercycle from which they previously had benefited – while the “Fragile Five” middle income economies (Turkey, Brazil, India, South Africa, and Indonesia) face slower economic growth, pressures on their external economic accounts, and serious domestic political challenges.

Not all is well in America, to be sure. But in comparative terms the global position of the United States is far better than almost anyone predicted during the crisis period of 2007-2011. Indeed, the above illustration of two measures of network prominence shows that in global banking the U.S. became more prominent following the crisis than it was before. How could this be? How could a crisis generated in U.S. financial and real estate markets – at a time when finance and real estate sectors were generating much of the U.S. economy’s value – have left the U.S. in a better global position?

While intuitively appealing, Strange’s framework has had limited influence in the U.S. academy – because (as she admitted) she never moved from this intuition to the development of either a theory of structural power nor a methodology to examine it. In an American academy increasingly dedicated to measurement and modeling, this had the effect of severely limiting Strange’s appeal. So one goal for this paper was to take several steps towards developing a theory of structural power, and a set of measures to match, by applying intuitions and statistical approaches from network science. Thus, extending some prior work, I conceptualize the global banking system as a complex network. The network characterization implies that units (national banking sectors, in this case, but also conceivably firms or individual financial actors) are interdependent rather than independent (as assumed in standard regression analyses); the network is “complex” because its topology –- the structure of the network –- partially determines its performance.

I argue that key features of this network resemble the “fitness plus preferential attachment” model of network development. In this model, a unit may require attractive attributes to gain a position at the core of a network (“fitness”), but once it gains that core position it can be kept in place through endogenous structural processes even if its quality advantage erodes completely (“preferential attachment”). Consider Microsoft Office, which I am currently using to draft this post. When it was first released it was superior in many respects to existing software. Today no such quality advantage persists, yet many still use the program suite. Why? I am using it because I know that when I send it to Pepper Culpepper and Kevin Young for comments that they will be able to open and read it. In other words, people use Microsoft Office because people use Microsoft Office. And as long as people use Microsoft Office people will continue to use Microsoft Office. It would take a substantial mismatch in quality, or a near-total fragmentation of the network of Microsoft Office users (perhaps via technical breakdown), in order for the network to become organized around another software.

Indeed, such fragmentation of the global economy occurred during the 1930s, and this provided the context for the shift from British to American hegemony. In the first post-World War II generation it was fairly easy to argue that U.S. prominence persisted because of its internal attributes, its fitness. Since the collapse of the U.S.-led Bretton Woods system in 1973, however, these arguments have been more difficult to make. Indeed, ever since then successive generations of IPE scholars, policymakers, and pundits have predicted the decline of the U.S. In fact, it was during one of these debates that Susan Strange outlined her view of structural power, in a 1987 International Organization article titled “The Persistent Myth of Lost Hegemony”. In a very real sense IPE (as a discipline) is based upon this very premise.

Yet despite the fact that Susan Strange was correct and her interlocutors were incorrect — indeed, the U.S. was on the verge of its “unipolar moment” at the time of her writing — nearly 30 years on from Strange’s intervention the myth of lost hegemony still persists. As Sean Starrs put it in a brilliant International Studies Quarterly article a few years back, “American economic power hasn’t declined – it globalized”. Eric Helleiner’s The Status Quo Crisis lays out the substantial qualitative evidence that the U.S. is still an extraordinary power after all this time, as he put it, particularly in global finance. The fitness plus preferential attachment model of structural prominence within complex networks helps us explain how, and why, the U.S. has been able to remain in such an advantageous position.

The Multinational Firm and Geopolitics: Europe, Russian Energy, and Power