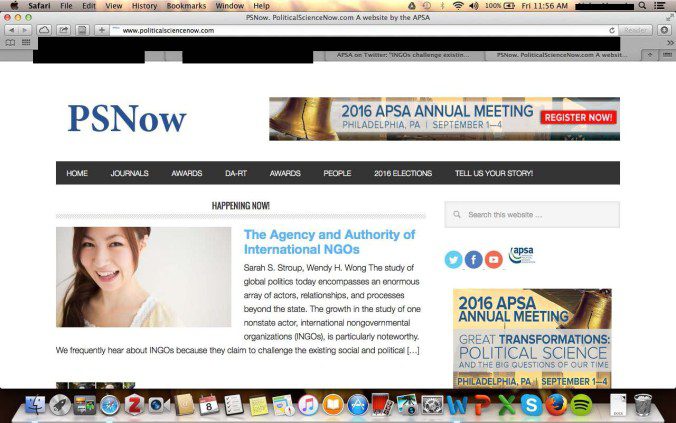 Tweeted and Deleted by APSA: Gender and Race in the Academy

I’ve been wanting to write a Duck post about the experience of a woman with visible minority status in IR for quite some time now. I was waiting for the right moment.  So thanks to the American Political Science Association (APSA), the professional association for US-trained political scientists, the moment has come.

Yesterday morning, an email came from a friend with a screenshot.  The screenshot showed an attractive Asian woman in a frilly top who looks like she’s having a good time looking into the camera.  I was confused.  Then I read the blurb next to it: this was a promotion from PSNow, one of the official APSA dissemination bullhorns.  They were promoting my recent piece with Sarah Stroup in Perspectives on Politics on international nongovernmental organizations (INGOs) and authority in global politics.  Instead of contacting us to request a photo, or choosing a stock photo that reflects the subject of our article, APSA decided to accompany this promotion with a photo of a random Asian woman.

So it’s pretty obvious to me why this is offensive, but let me spell it out.

I emailed APSA.  The response I got was that the image was an oversight, and they often choose diverse stock images of people.

Really?  I went to check their Twitter feed.  See the difference? 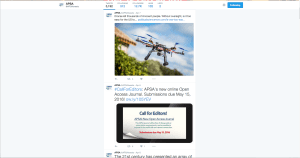 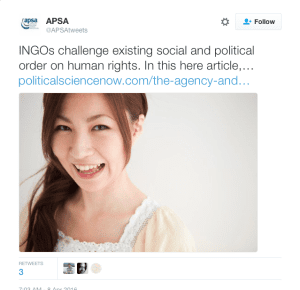 It looks like some recent images accompanying their feed look pretty germane to the content of the posts.

Let me say, I really appreciate having the hard work Sarah and I have put in pointed to by our big professional organization.  Thank you for noticing our work.  Disappointingly, what I found out when I emailed APSA was that in fact, the person in charge of social media for the organization does not know anything about political science.  That was at the least one of the official reasons I got for why the picture and the blurb about our piece went together.

An APSA employee thought it was ok to post a photo of a smiling (obviously non-academic) Asian woman to advertise an essay by two female authors – one Asian, one not.  But is that the perception that APSA wanted its readers to have of our piece?  And just because one of us is a visible minority, does that mean the whole piece of academic thinking boils down to someone who looks like one of the co-authors?  Oh and by the way, APSA deleted the post, rather than just replacing the image and issuing a better public apology than “bad choice of stock image.”  As though the whole thing didn’t happen.  As though it boiled down to some faulty download or spur-of-moment decision, and not a systematic search of images to accompany a purposeful post.  Perhaps we were too much trouble.  Perhaps it was too hard to just Google something more appropriate.  A lesson learned?  Don’t be too angry.  Be a model minority.

I once took a class about race in grad school, and we read about how race is constructed, how different races and ethnicities are perceived, what it means to be “racialized.”  But these experiences aren’t some analytic tool or perspective, like Marxism versus constructivism.  These are lived realities.  It’s hard to be a professional, racialized person in a career that prizes merit, ideas, and objective evidence.  It’s not that you can’t be a visible minority and a woman and do political science and IR.  But it’s that the doing creates more challenges the more boxes you can tick off on the diversity scale: gender/sex, race, sexual orientation, religion…intersectionality.  There are things that folks who don’t tick off boxes don’t have to do.  Being racialized and genderized in our profession is harder than it looks.

It’s time to start talking about this, because when I go to professional meetings, whether for IR or political science more generally, there are more and more women of visible minority status out there.  I don’t own this conversation.

What has held me back from writing on this before were a number of things, including not wanting to speak for other women’s experiences, not wanting to raise an issue that affects me but might be seen as not generalizable to others or even trivial, and not wanting to be an “angry ethnic woman.”  For a long time, I thought these concerns weren’t as important as my research.  Recently, my colleague Steve Saideman has conducted some straw polls (here and here) and found a lack of senior visible minority women in IR (that at least people were willing to share names of), confirming a sense I already had of the field, and of course there has been the work on the citation gap in IR, the gender gap more generally in political science, and both teaching and advancement concerns regarding gender.  I’ve been mulling over my experiences as a token Asian female on panels, around decision-making tables, and the expectation that somehow I must study China, or at least be able to speak about it and Asians generally – all, it seems part and parcel not just to being a female in the academy, but being a visible minority female in the academy.

But what happened with APSA today was telling – I wrote to them, telling them of my dissatisfaction with their choice of photo, and instead of issuing a mea culpa and changing the photo with a tweeted retraction, the entire tweet was deleted.

Let’s make sure that these issues do not get deleted.

Either DA-RT Works, or It Does Not