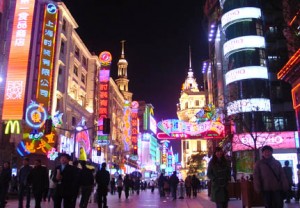 This is a guest post from Barry Buzan, Emeritus Professor at the LSE

For the past decade or so, China has been in the grip of a growing contradiction (in the classical Marxist sense) between a Chinese Communist Party (CCP) still deeply Leninist in its outlook, and the increasingly capitalist society that the CCP’s highly successful economic reforms have created. As Jonathan Fenby has argued, the CCP remains unbendingly committed to remaining in power in perpetuity. Yet as knowledge, wealth, organization, information and connectivity spread through Chinese society, that society becomes increasingly diverse, opinionated, and able and willing to mobilise in its own interests.

The CCP increasingly, and correctly, feels threatened by this society, which it does not understand, and does not like. As a consequence, China’s domestic and foreign policies are extremely closely linked, with the insecurity of the CCP as the central concern (see work by Susan Shirk and David Shambaugh). Its paranoia is indicated by the increasing resources it devotes to domestic security, now outweighing what it spends on national defence (Jian Zhang makes this argument; see also Wang and Minzner and Bader).

This contradiction was set up by Deng Xiaoping’s reforms from the late 1970s, which were aimed at saving the country from poverty and the Party from self-destruction. Having abandoned the core of Marxist political economy, these reforms necessitated that the CCP base its legitimacy on spreading prosperity to the masses and cultivating a backward-looking nationalism that constructed the CCP as necessary for the ‘New China’. Prosperity could only be spread to the masses by adopting market economics, and that in turn quickly generated what Michael Witt argued is the Chinese variety of capitalism that is now obvious in any major Chinese city.

This contradiction has now ripened to breaking point. Given the lack of alternatives to the CCP, and the deep conservatism of Chinese society about wanting to avoid any return to revolution, national division, and weakness in the face of foreigners, there were always only two possible dialectical resolutions to it.

The first would give priority to the country, and require the CCP to reform itself along pluralist lines so that it would be a better fit with the capitalist society that it had generated. This would require substantial political turnarounds by the CCP in order to make itself more open and pluralist, which does not necessarily mean more democratic. Its payoffs would be to keep the economic reforms going, and thus deliver prosperity more deeply and widely, and so sustain the legitimacy of the CCP as the ever-ruling party.

The second alternative would be to give priority to the security of the CCP by reasserting party control. This would require enforcing a higher level of conformity with the Party line on society regardless of the cost this would inflict on an economy moving swiftly into the information age and needing as much creativity, innovation and entrepreneurship as it can find. Both resolutions entailed up-front risks. Adapting the Party to the society entailed political risks. Adapting the society to the Party entailed economic and social risks.

Under Xi Jinping, the CCP has clearly chosen the second route. As Jeff Bader recently argued, party discipline is being stepped up, criticism of all kinds is repressed, public conformity of thought is enforced, and the state is seeking more economic control in order to manage the difficult transition to the next phase of modernization. It is not fully clear whether this turning point was the consensual choice of the Party, aimed not least at creating clearer lines of command and more policy coherence, or it reflected the emergence of an autocratic leader who is increasingly above the Party. Either way, the suppression of civil society and the return of the Party to command mode will almost certainly come at a considerable economic cost, weakening the provision of ever expanding prosperity as one of the key pillars of the CCP’s legitimacy.

To the extent that the economic pillar weakens, the remaining ones need to be strengthened. As Susan Shirked has argued, while the CCP can enforce social conformity to its line, it cannot recover widespread belief in its bankrupt ideology, so there is no going back to Maoist days in the sense of a deeply shared ideological belief. That leaves nationalism as the Party’s only remaining pillar of legitimacy. The CCP has successfully cultivated nationalism for several decades, and while it has drawn legitimacy from that, it has also become trapped it into a ratchet effect of strong foreign policy responses. Because of its domestic insecurity, the CCP cannot afford to look weak abroad lest it invite comparison with the decaying Qing dynasty during the nineteenth century and lose the mandate of heaven.

On that basis, we can predict, and indeed we can already see happening, that in the coming years China will become more nationalist, more xenophobic, and probably more assertive in foreign policy terms (on a more assertive Chinese foreign policy, see Yan Xuetong and Zhang). Its national security agenda will be more and more driven by the insecurities of the CCP itself, an acute irony given that China is hardly threatened from outside, and is far more secure internationally than it has been for two centuries.