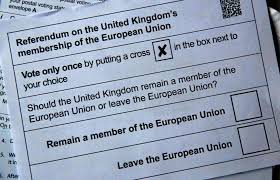 The UK’s vote on whether to remain in the European Union is tomorrow. I’m having trouble squaring a fearful nativist UK with the country I knew when I lived there from 1993 to 1995 completing a second undergraduate degree in international development.

The UK I knew was eclectic and increasingly multicultural, with its cultural scene perhaps even more comfortable than the United States in drawing on diverse influences to produce fantastic art. This was pre-Cool Britannia and pre-Tony Blair (and also before the Iraq War and the global recession), and there was an undercurrent of optimism that something great and better was in store for the country.

The UK had turned the country’s imperial history in to a source of advantage, with immigrants from former colonies bringing new influences in music, literature, food, and more to enrich the country. The willingness to mash-up, fuse, and experiment traditions of old with new tastes struck me as such a positive approach to life in a globalized world.

The dub, reggae, techno group Dreadzone for me epitomized this ethos. Their track Little Britain plays on that theme with lines like:

The country I came to love was full of many Jo Cox’s, the Labour MP who was assassinated last week by a far right lunatic. Given their history as a colonial power, there was a great awareness of, connection to, and sense of responsibility for the developing world. You saw this in the omni-presence of Oxfam shops, which were a mix of Goodwill and Ten Thousand Villages. You saw this in the popularity of Red Nose Day, an annual Comic Relief fundraiser for international poverty programs. There was a rawer form of this impulse embodied by people like Jo Cox who was a relentless champion for global justice in her work at Oxfam before going in to government. I saw this firsthand as a development campaigner working with a group called Third World First which later became People and Planet.

That’s why a decision to leave the EU seems like a tragic narrowing of perspective, an effort to shield the UK from the world and turn back the clock to a past that never was. Yes, the UK has an ambivalent relationship with the EU and its European neighbors, neither embracing the Euro nor the Schengen agreement on migration, but it is still part of Europe and could play a leadership role given the size of its economy and military capabilities.

John Oliver captured this sense of mixed feelings in his sardonic way:

“Here is how I feel about the EU: it’s a complicated, bureaucratic, ambitious, overbearing, inspirational, and consistently irritating institution, and Britain would be absolutely crazy to leave it especially because, if it stays, it can reap all the benefits while still being a total dick about everything,” added Oliver. “And that’s the British way.”

We will have to see how it plays out.