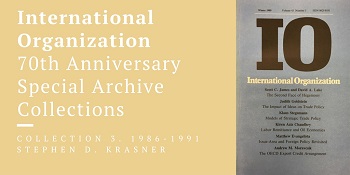 Ideas, Norms and Nonmaterial Factors in International Relations: A response to Krasner

To commemorate the 70th anniversary of International Organization, the editorial team asked former editors of the journal to reflect on their time overseeing the journal as well as on the most significant articles published during their tenure. I recently read Stephen Krasner’s reflection and was surprised by a number of conclusions he draws regarding scholarship on ideas, norms and nonmaterial factors in international relations.

Starting with Peter Haas’ “Introduction: Epistemic Communities and International Policy Coordination,” one of the two most cited articles published during Krasner’s tenure as editor, Krasner argues that articles on nonmaterial factors

These papers, however, and others by scholars such as Martha Finnemore, Kathryn Sikkink, and Michael Barnett (who did not publish in International Organization during my tenure as editor but have under other editors), have not generated a research program, at least not in the United States, that is as robust as those associated with analyses of material well-being and power.

Given that ideology or beliefs that are not directly generated by concerns about physical power and material well-being play such a prominent role in many of the challenges faced by the United States and other industrialized countries, the relative absence of scholarly concern with such questions is striking.

These are provocative statements given that the authors he lists have generated scholarship that has spawned productive research agendas in numerous areas of international politics from the study of international organizations, to NGOs, to human rights and security. Let’s explore Krasner’s claims that research on nonmaterial factors is “not robust” and “absent” in international relations.

One way to measure the robustness and impact of scholarship is to examine citation counts—a controversial yet practical indicator for measuring the diffusion of theory and concepts.

Margaret Keck and Kathryn Sikkink’s Activists Beyond Borders shaped the entire research agenda on the study of non-governmental organizations (NGOs) in international relations and has been cited 10,842 times in Google Scholar. My NGOs in Global Politics syllabus is based on the research agenda generated by Keck and Sikkink’s book and numerous scholars have published articles in IO refining and expanding upon the concepts and theoretical components advanced in Activists Beyond Borders including Amanda Murdie and Alexander Hicks, Dongwook Kim, Lisa Sundstrom, Charli Carpenter (also here and here) and Tim Büthe, Solomon Major, André de Mello e Souza.

Another indicator for robustness is whether scholars are viewed as impactful by their peers. The Teaching, Research and International Policy (TRIP) Faculty Survey asks “List four scholars whose work has had the greatest influence on the field of IR in the past 20 years. Please provide both first and last names. (N=3331)”

Data for all countries combined include both Alexander Wendt (first) and Martha Finnemore (tenth) among the top 10 scholars in the field. Notably, Martha Finnemore is the only woman to appear on this list. 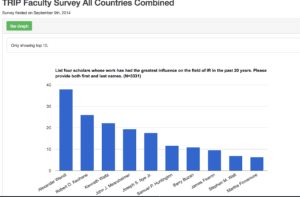 Examining the data for U.S. respondents only, Alexander Wendt remains in the top spot and Martha Finnemore moves up to ninth place—she remains the only woman noted.

The TRIP survey also asks faculty “Which of the following best describes your approach to the study of IR? If you do not think of your work as falling within one of these paradigms or schools of thought, please select the category into which most other scholars would place your work. (N=4659)”

The results here are interesting and contradict Krasner’s speculations. 22.62% of scholars indicate that they use a constructivist approach, while 18.33% and 12% say they use realism and liberalism respectively. So, more scholars use constructivist theory, it is perhaps just not published in IO. 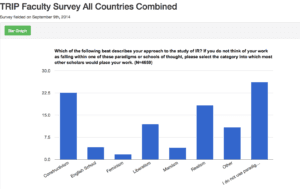 If we disaggregate the data by issue area, interesting trends emerge. If we accept Krasner’s claim that IO is mostly concerned with International Political Economy (IPE), then we should expect to see more publications using liberal/rationalist (material) approaches as 21.19% of those who claim to use liberal approaches also say they study IPE compared to 9.71% of constructivists and 9.93% of realists. 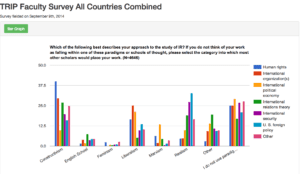 Some, myself included, would disagree with the claim that IO should be mostly concerned with IPE and would argue it should instead cover topics in international organization and global governance including human rights. In the TRIP survey, 29.61% of constructivists say they study international organization compared to 25.24% of liberals and 4.85% of realists. The largest number of constructivists, 40.16%, say they study human rights, compared to 16.54% of liberals and 4.72% of realists. Again, if IO privileges publishing research on IPE or if scholars perceive IO to be more interested in publishing articles on IPE (and thus do not send their manuscripts on other topics to IO) this would affect publication patterns.

If we disaggregate the data by gender, there is a possible explanation for the “absence” of research on nonmaterial factors that Krasner claims. 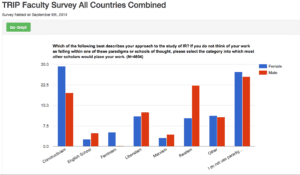 Daniel Maliniak, Ryan Powers and Barbara F. Walter’s the “Gender Citation Gap in International Relations,” published in IO, suggests that women are systematically cited less frequently than men in international relations. If women tend to use constructivist paradigms more often than men, this could in part explain the “absence” of scholarship on nonmaterial factors that Krasner purports.

Perhaps because of the dominance of economics in American social science or perhaps because of America’s own underlying belief system, which is so focused on economic opportunity (perhaps itself a myth) and openness, the causal impact of ideational, nonmaterial factors, whether scientific knowledge or religious convictions, have not been as deeply explored as material factors.

His focus on the “causal impact of ideational, nonmaterial factors” is the wrong yardstick for measuring the influence of the constructivist research agenda as most constructivists do not claim to demonstrate causation but constitution with the understanding that structure and agency are mutually constitutive. If IO privileges publication of positivist, causal research over non-/positivist research that theorizes the constitutive effects of nonmaterial factors, then we should expect an absence of this type of research in the journal as it is not the right “fit” for neither the author nor the journal.