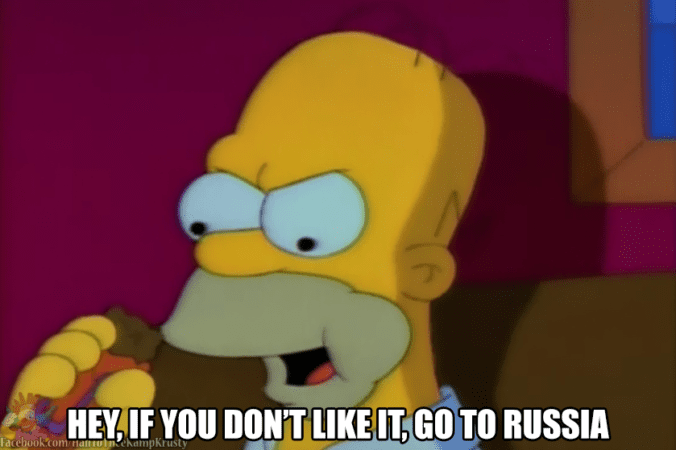 Russia has been one of the spectres haunting the US presidential election. President Obama’s latest press conference is a case in point:

Mr. Trump’s continued flattery of Mr. Putin, and the degree to which he appears to model many of his policies and approaches to politics on Mr. Putin, is unprecedented in American politics and is out of step with not just what Democrats think but out of step with what up until the last few months almost every Republican thought, including some of the ones who are now endorsing Mr. Trump

It is rather bewildering for a Russian observer: the party that gave birth to McCarthyism is now overwhelmingly endorsing a candidate who embraces Putin who is ‘a leader far more than our President’. Hillary Clinton, despite having pressed the ‘reset’ button back in 2009, has called Russia a dictatorship on a number of occasions, showing that it is easy to revert to Cold War era clichés to perpetuate American exceptionalism in comparison to Russia’s un-American autocratic Otherness. No wonder there has been a lot of angst and conspiracy theorizing on the (American) left that Trump is the Manchurian candidate, whose arrival has been anticipated from the Pavlov Institute since 1959.

It may be that by embracing an anti-establishment candidate one has to embrace a plethora of anti-establishment views, that, paradoxically, include pro-Putin views. Being anti-establishment is hard and takes a lot of differentiating to do. One of the possible steps here is to take foreign policy and create a radically new message. Criticizing Russia and President Putin’s crackdown on democracy has been mainstream among Western leaders and mass media. Hence, an anti-establishment party needs to go against the grain. 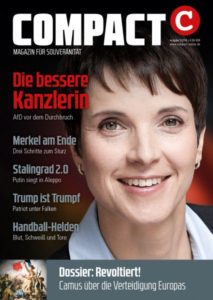 Summary: Trump is a patriot among falcons, Aleppo is a Stalingrad 2.0 that Putin is winning and AfD Chief would be a better Chancellor. The cover above is a relatively cheerful creation compared to more recent race-baiting garbage. Compact journal has been touted as Kremlin’s mouthpiece, but in fact these views are not that radically different from what Donald Trump or Nigel Farage have to say.

Thus, the Republican party is at the moment de facto aligned with a number of European far-right anti-establishment Eurosceptic populist parties: UKIP and Front National would be glaring examples that also boast friendly if not financial ties to the Kremlin.

It is notable that parties and individuals, normally known for their anti-Americanism are lining up to support Donald Trump. Maybe something to think about for undecided voters?

Women’s Lives Matter. So Do Elections.