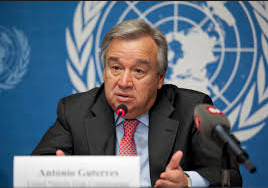 While the election of Antonio Guterres as the UN’s new Secretary-General was hailed by many, it has sparked renewed debate about gender issues in the United Nations system. While Guterres has a distinguished resume—including time spent as the Prime Minister of Portugal and as the UN High Commissioner for Refugees—this election cycle was also the focus of an unprecedented (and, ultimately, unsuccessful) campaign to get the United Nations to elect its first female S-G. The Campaign to Elect a Woman UN Secretary-General highlighted the candidacies of several qualified candidates, including two from Eastern Europe—a region widely favored as the region of origin for the next S-G. The United States supported the bid of Argentina’s Foreign Secretary Susana Malcorra, while Helen Clark (another figure with a long history in the UN) ran an active campaign on social media.

Given the array of candidates to choose from, and the commitment from groups like the 1 For 7 Billion campaign to promote transparency in the process, the selection of Guterres as a compromise candidate seems all the more surprising. Unfortunately, though, the UN’s failure to promote a woman to its highest diplomatic office reflects a consistent trend in the international community. Earlier this year, new research by Ann Towns and Birgitta Niklasson showed that only about 15% of ambassador-level offices in diplomatic corps worldwide are held by women. This figure on its own should be surprising, since many of the formal barriers that Western women faced in diplomatic service—including laws that forced married women to leave the service and rules that allowed ambassadors to decline the appointment of women to their staff—fell in the 1970s and 1980s. Yet Towns and Niklasson found that even in the most gender-equal countries, primarily Nordic countries, women make up just 35% of ambassador-level appointments. In North America and Europe, the numbers were 25% and 14%, respectively. In addition to this, their research showed that even where women did receive ambassadorial appointments, they were more likely to end up in “lower status postings,” i.e., postings to countries that are not militarily or economically strong.

The gender disparity in diplomatic circles should lead us to ask questions. In recent years, research in international relations has shown us that negotiations that include women are more communicative, while negotiations led by women seem to elicit a broader range of negotiating tactics among participants. Conversely, where women’s voices are omitted from the peace process, resulting peace accords can be viewed with suspicion, damaging the perceived legitimacy of such agreements in constituent communities. Additionally, the United Nations itself has made a normative statement about the inclusion of women, starting in 2000 with UNSC Resolution 1325 which recognized the importance of including women in conflict resolution at all levels.

Sixteen years after UNSC 1325 the mechanisms of inclusion—in the UN system and elsewhere—have stalled. At the international level, women are still less than 9% of all negotiators in peace talks. Researchers speculate that the inclusion of women and gender issues in Colombia’s peace process helped spark resistance to the accords, and the United Nations itself has failed to choose a woman as leader.

Where do we go from here? The failure to translate the promises of gender mainstreaming into action suggests that more should be done to amplify the benefits of a gender-inclusive approach. A continued push for transparency in the United Nations may also lead to progress. However, the linkages between gender in national- and international-level appointments may also be relevant. Perhaps the struggle to include more women in leadership  needs to begin at home, by holding domestic leaders accountable for breaking the diplomatic glass ceiling.

Ideas, Norms and Nonmaterial Factors in International Relations: A response to Krasner

Chirp from a Freshly Broken Egg