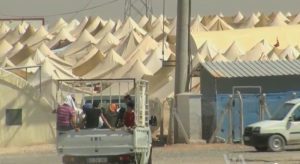 By and large, world leaders have gone from being taken aback about Donald Trump’s unexpected victory to being outright alarmed. Exceptions to this rule are Vladimir Putin and Bashar al-Assad, both of whom expect Trump to be far better to deal with than Secretary Clinton. Yet, while it still is not remotely clear what a Trump Doctrine will strategically comprise, his coming moves in Syria do not bode well.

Russia and the Syrian regime look to be the chief beneficiaries of the coming shifts in U.S. policy toward the 5-year old conflict that has weaponized half the country as refugees, killed half a million people, and continues to mete out suffering en masse in Aleppo and elsewhere.

Trump has said—erroneously—that Aleppo has already fallen, and he has described the opposition forces “as worse than Assad.” Trump will immediately remove support for the moderate opposition forces fighting Syrian/Russian/Iranian/Hezbollah forces, both overt and covert. To boot, the UN’s efforts to broker peace will be thoroughly undermined. At one point early on in the campaign Trump spoke favorably of a safe/no fly zone, but that is not on the cards at this point. He will avoid acting contrary to Russian interests.

The upshot of the coming Trump Administration’s moves in this space will be to strengthen the Russian hand, and give it a free one in and around Syria. As such, Putin is unlikely to test Trump in the manner some have speculated. Effectively he has no need to see how far down the road of harming U.S. national security interests he can go, when his partner in this potentially dangerous diplomatic dalliance is doing the work for him.

Trump is further expected to curb U.S. sanctions on Russia over Ukraine and simply accede to a permanent Russian annexation of Crimea—the Minsk II diplomat efforts on behalf of occupied Ukraine will be undercut in the process. Just as serious, once the U.S. ends sanctions against Russia over Ukraine, with domestic business voices getting louder it is hard to see how our European allies will be able to keep theirs in place.

The risk for Trump, aside from dealing strategic setbacks to our own national interests, is political. He risks the appearance of offering Putin a quid pro quo for his help getting Trump elected as president. This politicization will further damage our core interests. Trump has on multiple occasions erroneously stated that Russia and Syria are fighting ISIS.

In Syria Trump claims the true target of our military and diplomat efforts should be ISIS. While it is technically true that eradicating ISIS is a higher order western security interest, with this politicization it makes this appear to be a sort of feint. In fact, it is unwise strategically to let Damascus off the hook and embolden Russia when you can do the opposite of these things and still continue the currently successful efforts eliminating ISIS (oddly, Trump has criticized the massive operation that is kicking ISIS out of Mosel at present).

Trump has stated that “we should bomb the hell out of ISIS,” which along with other statements have suggested he will deploy up to 30,000 troops to Syria to combat ISIS. Again, however, he would be unwise to proceed with such an initiative when the Kurdish YPG and pesh merga, as well as opposition SDF along with Iraqi government forces and militias, have the situation well in hand. Turkey has also pledged to help the U.S. led anti-ISIS coalition by soon kicking ISIS out of Raqqa.

In terms of Iran, Trump will not be able to outright cancel the Iran nuclear deal as he has promised, but he will be able to weaken the deal enough to cause the Iranians to cease what up until the election has been full compliance. This would renew Iran’s drive toward nuclear weapons, with the Europeans being unwilling in the short term to reimpose sanctions on Tehran. Moreover, such a gambit would backfire even further by severely and irreparably undercutting Iranian moderates like President Rouhani and Foreign Minister Zarif. To use of Trump’s words of choice, this would be a disaster—unmitigated.

Thus, in a matter of a few fell swoops, unless he gets persuaded to alter the course he has set, Donald Trump will start off by strengthening the dictatorial regimes in Russia, Syria, and Iran while at the same time enraging China with a trade war—causing it to double down on wooing our own allies—and undercutting our European allies by damaging NATO with weakening our commitment to Article 5 collective defense and hurting the EU with a new wave of Syrian refugees and his support for Brexit.

As such, the Trump Doctrine emerging from all of this will end up thoroughly harming core U.S. national security interests with its highly deplorable transferal of Donald Trump’s nativism to the international realm and making it the hallmark of a new U.S. foreign policy that will make American and the world worse off than they already are at this delicate juncture of world history.

What Does Trump’s Victory Mean for the Environment?