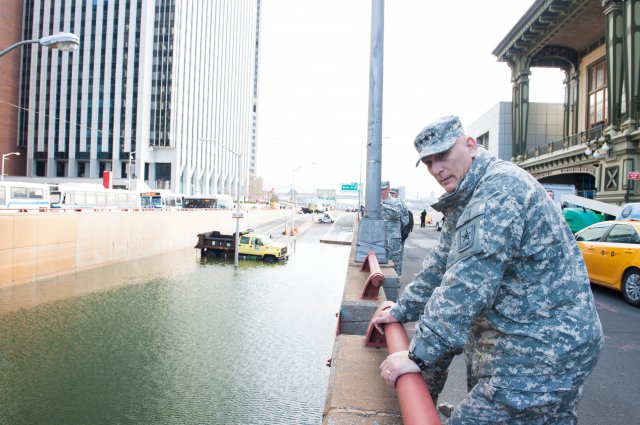 Climate and Security in the Trump Era

I’ve been asked by some reporters about the significance of Donald Trump’s victory for the agenda of climate and security, the emergent concern that climate change is likely to produce consequences that rise to the level of security challenges for the United States and rest of the world (some background here and here).  Some of my initial thoughts were quoted today in Scientific American and I’ve expanded on them here.  As I noted in my last post, we’ve already seen considerable speculation about what the Trump administration might yield on climate change and wider environmental policy.

We’re kind of entering in to  Kremlinology territory here. We don’t really know what is going to happen, and I think assuming the worst might actually be strategically counter-productive. Donald Trump has already signaled that he was going to walk away from a number of his previous hardline policy commitments like the border wall.

To the extent that he does possess an inner pragmatist as President Obama has suggested, then those baby steps in the direction of the light out to be encouraged. True, it is easy to read too much in to ambiguous statements like Trump’s apparent open mind on climate change policy in his New York Times interview last week.

My general sense is that yes we have reasons to be concerned, but we should also wait to see what Trump intends to do, who he actually appoints to key positions,and whether some of the more out there ideas — like zeroing out NASA’s earth science efforts — actually get taken up in policy.  I also think we need a theory of how to influence Donald Trump personally and the Trump administration broadly. Let me speak to both issues and the significance for the climate and security agenda.

Influence Trump the Man: The Art of Flattery

In terms of personal influence, a number of people are saying (see what I just did) that Trump is so anxious for credit and attention that he is likely to respond to flattery (see William Saletan here and Jeremy Stahl here). I wrote a tweet storm on this last week. If you can show Trump that he will get respect Rodney Dangerfield style from the New York Times and the international community and be perceived as doing right by America, wouldn’t he go for that?

1) I wonder if handwringing about Trump as the apocalypse more likely ushers in the worst. He seems moved by flattery.

Trump also appears especially partial to military voices, as he contemplates filling his cabinet with recently retired military (which is worrisome for reasons related to civilian control of the government). It was at least somewhat encouraging that a single conversation with General Mattis, under consideration for the Pentagon, seemingly convinced Trump to back away from his previous embrace of torture (though Trump may yet again reverse himself after he talks to someone else).

Still, recognizing that Trump may listen especially carefully to military voices, it seems like a wise strategy that one of the first outreach efforts to Trump on this issue came from retired military from the Center for Climate and Security’s Military Advisory Board.

I wouldn’t write off Trump as a lost cause on this issue just yet. As Andrew Holland from the American Security Project noted:

@busbyj2 agree. Let’s wait until February/March at least before figuring out what’s happened.

Influence Trump the Administration: Watch Who He Appoints

Trump may allow Cabinet members some leeway to set the direction in their individual areas. So, who he appoints to key positions may tell us more about his intent in this space. We have some portents from his announcements of General Michael Flynn as National Security Adviser and Congressman Mike Pompeo to be director of the CIA. Neither of these augur well, but other key posts such as Secretaries of Defense and State and the director of National Intelligence remain.

Pompeo seems to have a longer record of statements and actions (ie Congressional votes) opposing action on climate change. Flynn said something this summer right after the Orlando shooting about the President’s misplaced priorities on climate change. Other potential nominees like General  Mattis may have different views.

As I’ve blogged before and described in more detail here, the work integrating climate concerns into the Pentagon is much further along in terms of planning documents, as there are a host of analytical products by DOD as a whole, the various combatant commands, the Navy, and on specific issues like the Arctic. I imagine that there will be some pushback from the Pentagon if President Trump decides to walk away from all of these efforts, as bases like Naval Station Norfolk are subject to flooding with sea-level rise and storm surge. I anticipate that there will be folks in the military prepared to push investments in preparedness.

The investments the military needs to make in preparedness though have as I understand it have largely yet to be made, in terms of climate-proofing military infrastructure or building new capabilities for a changing climate (such as icebreakers).

A Trump administration may also face some but less push back internally if it seeks to cut climate assistance overseas, which could be a useful tool to prevent the overseas security consequences of climate change affecting U.S. interests. However, there isn’t as strong a constituency in the US for these investments, but international actors would be mightily unhappy if the U.S. walked away from its $3 billion commitment to the Green Climate Fund, of which only $500 million has been fulfilled.

If Pompeo takes his climate skepticism in to the CIA, the kind of analytical work the agency used to do on this topic might be limited, though it would also depend on whether the Office of the Director of National Intelligence continues to exist and who is in charge of that. At one point, CIA had a center that examined climate change and looked at the implications of climate change for US national security including scenario planning. That was disbanded during the Obama years, for reasons not entirely clear (perhaps too visible to Congressional Republicans?).

The National Intelligence Council has done a variety of studies on climate and security (2008, 2016), water and security (2012), food security (2015), and whether or not it continues to do so would depend upon the cast of characters in the incoming administration. For example, the NIC carried out the 2012 water and security report at the behest of Secretary Clinton so appointments in different agencies will matter for what kinds of analytical products the USG produces.

I would also distinguish between what the CIA might do and what the ODNI and NIC might do. My understanding is that the NIC moved more under the aegis of the ODNI after its creation. Barring another major reorganization of the intel community (which some have mooted), ODNI would sit atop the intel hierarchy. Pompeo, who is a climate skeptic, would only run a piece of the intel pie. So whether the ODNI continues climate security work depends on who is director.

If the ODNI appointment or if the president signaled and his appointees followed that there wouldn’t be any additional support for climate and security related work, it might mean that we would face diminished strategic awareness of the implications of major shocks to food systems, large-scale humanitarian emergencies, and other impacts of climate-related processes. ODNI and NIC reports, along with those by the Pentagon, have gone a long ways to processing what climate change means for U.S. interests, U.S. bases, as well as operational implications for the U.S. military.

Finally, there could be some impacts on satellites and other information collection that the USG presently collects, depending on funding for basic science that comes out of this new administration. We might also face significant gaps in situational awareness if the president withdraws support for NASA’s scientific capabilities in this space.  Last week, an article in The Guardian made the rounds that said a Trump advisor said they planned on phasing out NASA’s earth science capabilities to focus on space exploration and not controversial science. While this got a lot of play, I tend to agree with Brian Kahn of Climate Central that we shouldn’t make too much yet out of one adviser’s comments.

Unpopular opinion: freaking out about NASA’s climate budget right now is unproductive. We don’t know what Trump will do

Even if the incoming Trump administration chooses to ignore the threat, climate change is not going away. As Caitlin Werrell and Frank Femia from the Center for Climate and Security note:

Indeed, climate change is happening without concern for who is in power. Just as it’s impossible to dispute the existence of nuclear weapons, and the threat nuclear proliferation poses to all nations, the reality of a rapidly-changing climate is here to stay. The Arctic is melting, the seas are rising, and wildfires and droughts are becoming more severe. This is the existing global reality. If tomorrow’s leaders don’t recognize and deal with this underlying trend– distracted as they are by the turbulence of daily events – we are likely to miss critical threats to national, regional and international security.

We have seen really weird shifts this year in the weather. Earlier this month, it was reported that the Arctic is more than 36 degrees Fahrenheit above normal temperatures where sea ice is rapidly retreating in the summer. There are parallel signs that the ice sheet in the Antarctic is breaking up faster than anyone thought possible. We have witnessed unprecedented coral bleaching on Australia’s Great Barrier reef in the wake of extremely high ocean temperatures. The drought in California has killed more than 102 million trees since 2011, 62 million alone this year, raising questions about the survival of the giant sequoias.

Not all of these changes are necessarily the product of anthropogenic climate change, and we don’t yet know the implications fully for social and political systems, but what’s clear is that climate changes will happen, whatever Donald Trump decides to do and whoever he appoints. That reality is something the new administration won’t be able to run away from.

WPTPN: Lessons from Turkey: Populist Nationalism and the Threat to Democracy