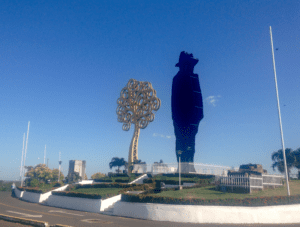 The Revolution: Then and Now

An American first lady is about to make history. No, not that one.

Nicaragua’s November 6 election has drawn few headlines internationally, but this week the New York Times ran a profile on Rosario Murillo, the first lady who appears on this year’s ballot alongside her husband Daniel Ortega. With the outcome relatively certain, this will be Ortega’s third consecutive term in power, and his fifth time overall leading the country. Constitutional changes passed by his party, the FSLN, have solidified his position in power, and positioning his wife as vice president is a move widely seen as an attempt to ensure succession. All of this might rightfully lead an observer to question what happened to the spirit of revolution in Nicaragua, but the answer is complex.

While the opposition–including some disillusioned Sandinistas–have decried attempts to suppress alternative voices, the fact remains that Ortega is a powerful force in part because he is popular. Polls have put support for Ortega between 65 and 70%, and during my time in Nicaragua earlier this year I met many enthusiastic (and some lukewarm) FSLN supporters. One reason for Ortega’s enduring popularity, in spite of political and personal scandals, may be that he has managed to effectively occupy both sides of the political spectrum in Nicaragua. His resume as a leftist includes his past as a revolutionary and later efforts to forge partnerships with other leftist governments in Latin America, withstanding years of U.S. sanctions by receiving aid from Cuba and Venezuela. Today, people in Managua still speak enthusiastically about the Cuban doctors who operated on their cataracts, and Hugo Chávez is lovingly memorialized with an enormous, festively lit cutout of his head adorning a traffic circle. Yet Ortega (and Murillo) have also made moves to placate the right. Their 2005 marriage (years after a civil marriage) was meant to curry favor with the Catholic Church, and the fact that Ortega has done little to reverse a 2006 abortion ban also speaks to religious influence. While Nicaragua remains one of the poorest countries in the hemisphere, Ortega likewise maintains a “good relationship” with the ultra-wealthy, including Nicaragua’s first billionaire.

Another secret to Ortega’s popularity is that, while Nicaragua still struggles, there is a real sense among its people that it has been doing better, and it could be doing much worse. Aside from a rise in GDP per capita that has continued on Ortega’s watch, visible improvements like new schools, community playgrounds, and beautification projects (I use that term loosely) can be enjoyed by rich and poor, rural and urban alike. More importantly, many Nicaraguans are aware that their country has it better right now than some of their Latin American neighbors. Compared to the alarming spread of gang violence in El Salvador and Honduras, Nicaraguan crime rates remain fairly low. Compared to its former patron Venezuela, Nicaragua also looks much more stable. Life is certainly not perfect, and much still depends on Costa Rica, where many poor Nicos work illegally for low wages. But low crime, stability, and new stuff are generally things people like.

Overall, the New York Times’ presentation of Nicaragua as a real-life “House of Cards” does have some truth to it, but the secret of Ortega and Murillo’s likely success this weekend is much more banal. They will succeed because they are popular, or at least because they’re good enough for most Nicaraguans right now. How their political fortunes will play out long-term remains to be seen.