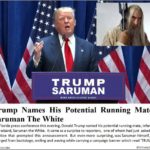 This is a guest post by Eric Grynaviski, an Associate Professor of Political Science at International Affairs at George Washington University. He is the author of Constructive Illusions (Cornell, 2014) .He studies sociological approaches to cooperation and conflict, and international ethics.

Over the last few days, protestors have taken to the streets to combat what they believe is an evil power that will soon occupy the White House. The problem of evil has featured in rhetoric about this election, in fact, for months, as featured in the Washington Post commentary on the election. The tropes “politics is evil,” “Hillary is evil,” and “Trump is evil” have a new significance when people are confused and disoriented by Trump’s surprising win.

Perhaps because of my childhood reading fantasy novels, when I think about the problem of evil, I think about Tolkien’s Lord of the Rings. Why? Tolkien was a member of a group of academics and writers called “The Inklings,” informally led by C.S. Lewis. For the most part, these fantasy writers struggled with organizing epic stories that grappled with the problem of evil in intense and transformative ways (see Bedeviled).

One way to grapple with the results of this election is to look at the problem of evil through their eyes. In some respects, Tolkien and his friends experienced a world similar to ours. Many fought in Europe during the First World War, and they were writing during World War II. They often depicted Hitler, whose lust for power drove Europe into chaos, as a living manifestation of evil. Tolkien’s fictional world includes Sauron (and his former boss), as a kind of living Satan, who corrupts the good through magic, promises, and fear. To meet this threat, the free peoples of the world—some men, hobbits, elves, and dwarves—team up with a wizard to fight this evil.

For Tolkien, people (or mythical creatures) are rarely innately evil. Rather, they are corrupted by their desire for good. In Morgoth’s Ring, Tolkien describes Sauron as one who “loved order and coordination, and disliked all confusion and wasteful friction.” Sauron turned to Melkor—the evil figure who had been around since creation—because Melkor promised him the power to make the world orderly. Sauron lusted for power, in short, to do what he believed to be good, and only later obsessed over power for its own sake.

Saruman “falls” in the same way. Saruman had been a good wizard who wanted to help defend the free people against Sauron. To do so, he learned as much as he could about the lore of the rings. But this led him to despair: only by taking the power of the one ring as his own could he hope to defeat Sauron. Again, an obsession with the need to gain power to do good led Saruman to become evil. This model of the fall of pure souls, most likely influenced by Tolkien’s Christian beliefs, pervades his fiction.

For me, good fantasy novels have these tragic elements. The most interesting bad guys are not born evil, like Damien Thorn in the Omen movies, nor do they simply grow up petty and mean, like Sophie in the School for Good and Evil. There needs to be tragedy.

This brings me to the election. Much like then, U.S. politics has turned into a battle of good against evil, abroad and at home. It has been awhile since the problem of evil has been so commonplace when describing political opponents.

At first glance, this election does not appear tragic. Trump does not seem like a person motivated to gain power to help others and is thereby corrupted.  If there is a tragic element, it is for the country. In the post-election period, there are already voices calling for us to ignore the content of the election. Excusing being mean and nasty, racist and sexist, conspiratorial and xenophobic, etc. because we want our political party to be in control is akin to an endorsement of Sauron. Those who excuse Trump’s moral failings presume that somehow, behind the scenes, some good will come from such a vile enterprise. From where I sit, I see an obsession for political power—by Trump, by Republican voters, and also from Democrats frankly. They are no longer just divorcing means and ends; they don’t care about ends beyond winning. For Tolkien enthusiasts, we are at the end of the Second Age—we are after the Fall.  We have become the Black Númenóreans, who aid and excuse Sauron—the Giver of Freedom to some—because he promises power.

For Tolkien, the only way to resist true evil—political power—is to anoint those who will not use it. The power of the free people is not in force of arms. The hero among men—Strider—is a lost king whose power comes from his healing abilities and close connections to land and history. His most important actions were at the head of an unlikely band of individuals who meandered around Middle Earth, refusing to use the power that was literally at their fingertips. Legolas’ and Gimli’s power comes from their ability to overlook a history of antagonism between elves and dwarves and participate in a fellowship in which true friendship is as important as the bow or the axe. None of these figures accomplish their heroic acts by wielding political power, and they only tangentially use the force of arms to accomplish their goals (Note: I credit the Ents for defeating Saruman and the oathbreakers for the Battle of Pelennor Fields, as their contribution was necessary and sufficient to win the battle). The study of history and philosophy, with a turn toward moral thinking, is the source of their power.

What does this mean for political scientists? Studies about how to win campaigns and elections, and policy-relevant studies about how to use force to achieve elites’ ends in a world in which deportation and nuclear weapons appear to be on the table, remind me of Númenor. In the Second Age, Númenor was home to men and women who were loyal to the forces of good. Sauron, however, secretly whispered to the king the secrets of power. He told the king how to gain more power and then how to use that power to launch an armada against the Undying Lands. Sauron taught the secrets of power to people who had forgotten that the better part of politics is lodged in our moral instincts.

I would expect Sauron to do a job talk in a political science department on Númenor, armed with graphs showing the causal effect of loremasters’ songs on the king’s popularity. He would be a wiz at answering questions about causal identification strategies, and maybe had a cool experiment or two (preregistered of course). Or, he would do a nifty policy-relevant analysis of naval tactics against the elves. The question and answer session would include no discussion of the content of the songs, their morality, or their effects on the character of politics; nor would he discuss whether the armada’s goals were right. It would be interesting (loremasters are cool!), but after this election is seems by itself empty.

Political scientists remind me of Isildur, who refused to throw away the ring when he gained it from Sauron. The political science blogs I regularly read—the Monkey Cage, Political Violence at a Glance, and the Duck of Minerva, for example—have yet to publish any reflections by political scientists about the meaning of the election. The Monkey Cage second post-election post’s “Lesson 1” showed that they forgot they predicted a Trump win but now remember so it’s ok (this is a friendly jab at a colleague who I respect greatly). My bet is there will be a lot of analysis and discussion by political scientists about why Trump won, what he will do and what the effects could be, and how limits on Trump’s use of power might curtail his policy flexibility. At the moment, however, finding ways to make political science relevant by trying to better understand the ring strike me as empty. The first lesson of this election should not be about forecasting.

The protestors are closer. Many protestors on the streets over the last few nights, I think, would welcome a Frodo who could somehow throw modern politics into a volcano. Alas, I know of no volcano that would be willing to accept the grossness of the modern political system; unlike Mount Doom, it would vomit it up as to repugnant to consume.

Instead, political scientists should ask “What would Gandalf do?” One part of the magic of the characters is that they consistently remember their values: Sam and Frodo think about home and hearth, the Dwarves think about their halls of stone, the Elves think about their role in protecting nature and care of the world, and Aragorn remembers a time when the king used a model of rule that relied on autonomy and good government. These reflections on the prospect for a different world with a different politics motivated the characters.

Political scientists need to think seriously about how to incorporate the study of politics, traditionally conceived as the study about right and justice, into our classrooms, turning them, in part, into fora where we can discuss and debate the justice of mass deportations, sexual violence, racism, policing, and a host of other issues. I also hope the next four years will include more reflection on the nature of political power, the study of electoral reform, and more experimental thinking about alternative ways to think about democratic governance. Using the Trump election as a springboard for inquiry would return us to questions of ethics as central to discussions in political science.

What Does Trump’s Victory Mean for the Environment?