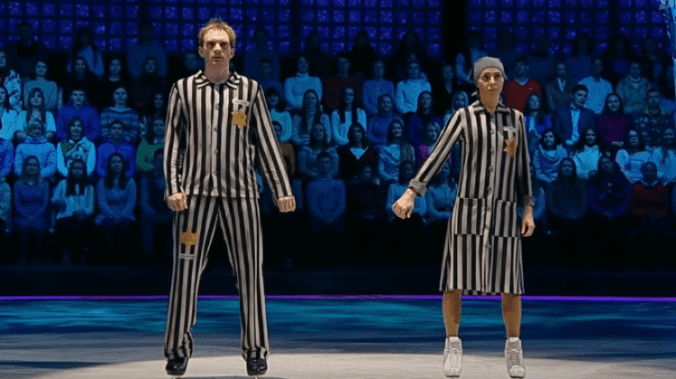 Usually when news about Russia makes it to American late night shows, Russia either gets hit by a meteorite, or it annexes part of a neighboring country. Either way, it is illustrated by Putin’s bare-chested photograph on a horse. This time, however, neither celestial bodies, nor Putin’s nipples were at stake. Several high-profile newspapers and The Daily Show with Trevor Noah reported on…  an ice-skating dance routine.

‘Wife of Putin’s ally’ [putting aside the whole sexist tradition of defining a woman through her male companion] was widely criticized for her Holocaust-themed ice-dancing routine. Even though the press secretary of the Russian Federation of Jewish Communities said in a commentary that the story didn’t have anything to it and there was no reason to get upset over the dance, as the Holocaust has been used as a theme in many art projects. The champion ice-skater Tatyana Navka was also surprised at the negative reactions and insisted that the routine was done ‘to remind our children about that horrible time’.

No offence, American media, but you kind of live in a bubble that does not include Holocaust deniers and anti-Semitic crime. Oh, sorry, now you no longer do. Russia is a different story. Holocaust was never really a part of Russia’s collective memory. Most monuments erected during the Soviet era on the sites of Jewish massacres were dedicated to civilians while their Jewish identity was brushed over. Soviet troops liberated Auschwitz in 1945 and Soviet citizens knew about concentration camps, but the Jewish identity of the victims was downplayed. Through the works of Ilya Ehrenburg, Evgeny Yevtushenko or Vassily Grossmann some people were familiar with mass executions of Jews. But these works were far from mainstream and were a protest against Soviet governmental policy of hushing up the ‘final solution’. This is yet another example of ‘warped mourning’ over the victims of wars, famines, repressions and purges in Russia.

Anti-Semitism is not a part of Russian government’s policy – so much so that Russian far-right nationalist groups accused Putin of being a crypto-Jew.  The situation is not ideal, but it is a big improvement over the publication of the first edition of ‘Protocols of Elders of Zion’ in 1903 in Tsarist Russia and the campaign against ‘rootless cosmopolitans’ under Stalin. On a grass-roots level there are a number of anti-Semitic conspiracy theories. They usually echo Soviet era frames about Jews being agents of the West, which is often found in barbs against liberal journalists in Russia: ‘suitcase, train station, Israel’ –  the anti-Semitic version of ‘if you don’t like it go to Russia’ [or the kind of critique Colin Kaepernick received after kneeling during the American anthem].

The ice-skating routine was not meant to mock Holocaust victims and it certainly did not deny it. In general, the number of Holocaust-deniers in Russia is pretty low, but many people believe that all Jews were hiding behind the frontlines during World War II. Yes, tell that to my grandfather, my grandmother’s brothers who died at the Kursk tank battle and other more than 500,000 Jews who served in the Red Army during war. You may wonder where this kind of exact statistics may come from, but almost all forms of Soviet IDs and official forms had a so-called 5th box that identified the ethnicity of the citizen. That made it easier for anti-Jewish purges after the war.

You know what, I am glad that Tatyana Navka and her partner did this routine. Maybe someone will watch ‘Life is beautiful’. Maybe someone will listen to Noa’s message of peace. Maybe after watching it somebody will think about the dangerous path from hate speech and discrimination. I am looking at you, Donald Trump.

WPTPN: The Legitimacy of American Hegemony in the Age of Trump