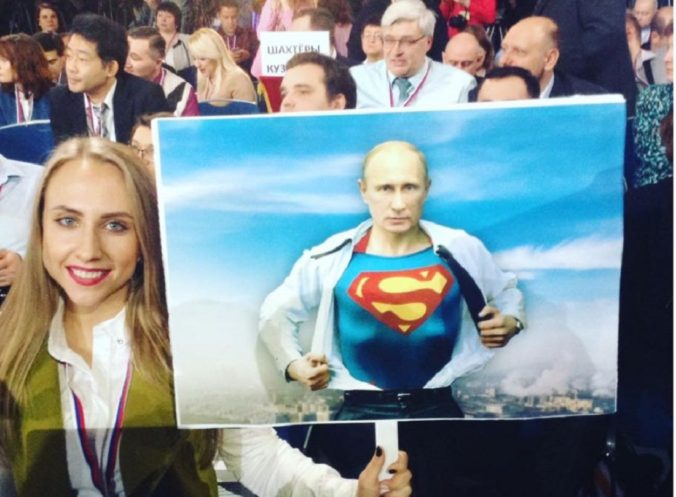 Putin’s annual press conference is a chance for regular citizens to spend 3 hours in a great and rich Russia, where everything is in order and Putin is capable of installing presidents in foreign countries (according to one journalist). In general, the press conference strived to paint a picture of a great power facing some economic problems and who is constantly challenged by other countries (they are probably jealous and/or Russophobic). For me it was also a chance to wonder at Putin’s stamina. He might not be Superman, as one of the posters brought by the journalists stipulated, but his bladder is definitely made of steel.

As always, Putin demonstrated his ability to juggle all kinds of statistics in response to questions about economics, including Russia’s successful export of IT. One may wonder if he included hacking, because that was definitely a very successful export. As a female journalist called for abolishing juvenile justice in Russia, because ‘slapping children is a traditional Russian [sic] pedagogical method’, Putin emphasized that there was a slim line between slapping and beating up, but still warned against interfering into family matters. In comparison to the rhetoric of some of the questions, Putin did make an impression of a more liberal and reasonable politician, very much fitting into the narrative of ‘without Putin it could be much worse’ .

Putin was unfamiliar, however, with the name of a woman convicted for treason for sending an sms about tanks in the streets of Sochi in 2008 on the eve of the Russian-Georgian war – a question that was posed by a Russia Today journalist. When pressed for his knowledge on the murder of Russian oppositional leader Boris Nemtsov, which occured literally several steps from the Kremlin, Putin quickly changed the topic to the murder of the Russian ambassador to Turkey Andrey Karlov. The situation in Syria came up on numerous occasions during the press conference and Putin somewhat gleefully agreed with a Sputnik journalist that Russia managed to resolve the situation in Aleppo ‘without Western meddling’ and managed to conduct one of the biggest humanitarian operations in history by evacuating civilians out of the besieged city in cooperation with Syria’s Bashar Al-Assad. One may wonder, however, why the need for this humanitarian operation arose in the first place.

One country was definitely on the mind of both foreign and Russian journalists. The ‘superpower–off’ with the US has been on for a while. Trump’s win and the Western media panic about Russian interference have probably added an extra scoop of succulent schadenfreude on every Putin’s answer. He even managed to slip in a joke on early elections in the US that a lot of Americans would like (‘[early] elections in Russia are possible, but not worthwhile’ FYI).  President Putin consistently emphasized that the Democratic Party was blaming Russia for no reason. As he remarked in his answer to the BBC correspondent, hackers did not falsify the information they only exposed the truth that the Democratic National Committee was hiding from the American public [this was my most retweeted live tweet of the press conference]. Either way, it sounded like hackers provided a public service. It seems like Putin was genuinely annoyed that Russia was being blamed for everything and quoted almost word-for-word Donald Trump that “someone could have hacked the DNC from their bedroom”. At least the Russian President had the decency not to fat-shame the alleged hacker or place his bedroom in China.

I hate to admit it, but to a certain extent Putin is right. The Democratic Party has been going around blaming Russian hacking for their election loss, but numerous autopsies showed that there is a whole combination of factors including campaign mistakes in Michigan and Wisconsin, FBI Director Comey’s letter and even media fixation on Hillary Clinton’s emails when covering her campaign that lead to her loss. One should not forget that she did win the popular vote and the fact that she lost the presidency can be attributed to the “archaic American voting system that does not have direct democracy”. The latter quote is by Vladimir Putin, by the way. Finally something more than half of American voters can agree on with a Russian President.

A Plea for Cease Fire in the New American Civil War, Part II—The Case for Civility and a Changed Tone of Debate