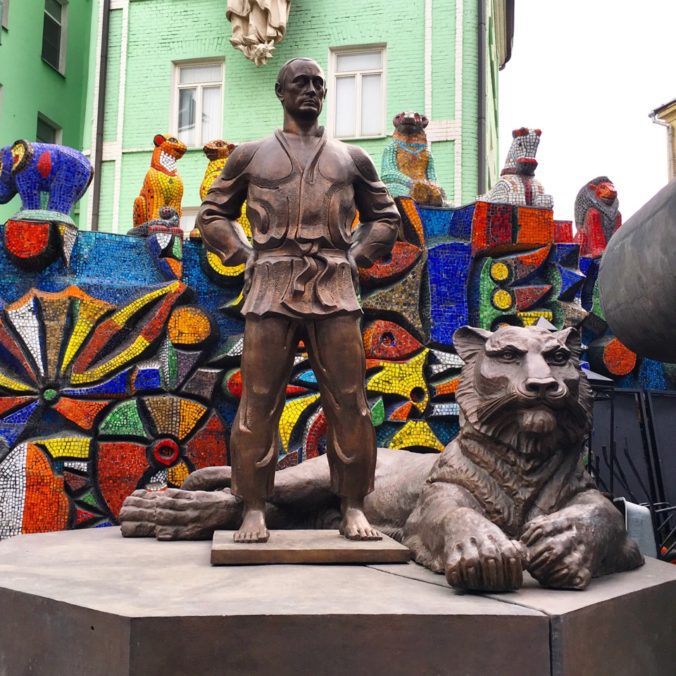 This World Politics in a Time of Populist Nationalism (WPTPN) guest post is written by Emily Holland and Hadas Aron, PhD Candidates in Political Science at Columbia University. Holland’s research focuses on energy politics, political development, Russian politics and East/Central Europe. Aron studies right wing populism and nationalism with a regional focus on Eastern Europe, the United States, and Israel. They blog at Commenting Together.

Immediately following the annexation of Crimea and the tragedy of flight MH17, the West largely regarded Vladimir Putin as a dangerous international pariah. But two years later, following the sweeping success of demagogues world-wide, Putin has emerged as a new oracle of the East, leading the charge for the new wave of illiberalism. Widely praised by US President Elect Donald Trump, Philippine President Rodrigo Duterte, Turkey’s Erdogan, India’s Modi, and Hungary’s Orban, amongst others, Putin’s brand of strongman leadership and exclusionary nationalism is succeeding like never before.

In Western states, liberalism is in crisis. Following Brexit and the shock election of Donald Trump on a platform of protectionism, racism, anti-immigration and fundamental illiberalism, analysts and academics can no longer ignore the warning signs. A sweeping sense of malaise over the uneven distribution of benefits of globalization has existed for years. In 2014 Viktor Orban delivered his famous “illiberal democracy” speech in which he pronounced, “liberal democratic states can’t remain globally competitive” and cited Russia as an example of a successful illiberal nation.

Part of the reason Putin is leading a new wave of populist strong men is the fact that Russia’s crisis of liberalism happened 15 years ago, well before the seeds of discontent began to sprout in the West. Putin came to power in 2000 after a decade that left citizens weary of its nascent liberal experience, having lost their life savings twice, experienced hyperinflation, chaos, rampant corruption and lawlessness. After the leadership of the drunken Yeltsin, Russian citizens welcomed a young, vital Vladimir Putin. He promised a return to former glory and consolidated his power with belligerent rhetoric and actions like the use of indiscriminate force against Chechen “terrorists”.

Putin framed the separatist struggle in Chechnya as an existential threat to the Russian nation and embarked on a devastating war that completely destroyed the city of Grozny while framing himself as the protector of the Russian nation. The “rally around the flag” effect is not a new phenomenon, and has Putin continuously used it to his advantage. Anti-immigrant sentiment strikes a chord with the disenfranchised in troubled times, and Putin tapped into this fear early in his tenure as President. Putin embarked on a plan to stamp out illegal immigrants, setting up detention camps and setting up an explicit program ethnic profiling that allows police to target non-white individuals. Several of Donald Trump’s campaign speeches on immigration look as though they could have been direct English translations of Putin’s thoughts on the issue.

Another strategy that the new wave of populists have borrowed from Putin’s playbook is turning against domestic minority populations. Russia has embarked on a vicious state sponsored attack of the LGBT community, claiming gays and lesbians are a national security threat. Orban has used this tactic in Hungary, in particular against Syrian refugees, characterizing them as threats to the very fabric of Hungarian society. Duterte is employing a similar tactic in his ‘War on Drugs’, stirring up violence and promoting extrajudicial killings of drug users, whom he refers to as “the dirt of society.”

Populism, by nature, uses an anti-elite and anti-establishment rhetoric. To remain populist once in power implies a continued mobilization against real and perceived enemies. More often than not these threats work. Putin’s popularity ratings hover above 80%. No doubt Trump et al. are aware of this as they emulate Putin’s strategies. Of course, this brand of leadership is vulnerable to economic crisis and more, but Putin has proved to be a canny leader with a ruthless ability to maintain control over his empire. Between 2012 and 2013 Putin’s popularity ratings dropped to the low 60s. Following the annexation of Crimea in 2014, however, his ratings jumped back up to approximately 87%, with nine out of ten Russians expressing a positive view of their president.

Putin’s aggressive foreign policy has created an international environment of belligerent strongman. At the time, President Obama’s administration was largely successful at countering Russia’s aggression, but many perceived his thoughtful and collaborative style of leadership as weak. Voters in many countries seem to prefer their own Putin-esque style leader to counter Putin. That leaves Germany’s Angela Merkel as the most sober and restrained leader today. She too is up for elections in the coming year.

Putin’s sixteen-year reign as effective autocrat of Russia has no doubt inspired many of the would-be firebrands around the world. Many of Europe’s ascendent far-right parties are slavish Russophiles who mimic Russia’s characterization of the liberal West as hypocritical and corrupt. These (mostly male, with France’s Marine Le Pen and Germany’s Frauke Petry as notable exceptions) leaders cooperate across borders, and engage in mutual flattery, praising one another as “true leaders” and “bright and talented” while attacking elites, immigrants and minorities.

The connections between populist leaders and Putin go beyond mere rhetoric. Russia has supported Donald Trump’s candidacy in both speech and the alleged hacking of DNC emails amongst other targets. Orban doggedly courted Moscow, which responded with a favorable natural gas deal as well as a €10b loan to promote Hungarian interests. While Hungary is receiving a significant portion of its annual budget from the European Union, it enjoys the ability to play both sides against each other for material gains. In the process, the alliance between the populist Orban and Putin is strengthened.

Following Brexit, the election of Donald Trump and the likely election of conservative Francois Fillon in the French presidential election of 2017, it is clear that Putin has succeeded in creating a world order that is much more likely to embrace Russia than reject it. Not only that, he has inspired a new wave of masculine, demagogic leaders who invoke him as the Oracle of the East.