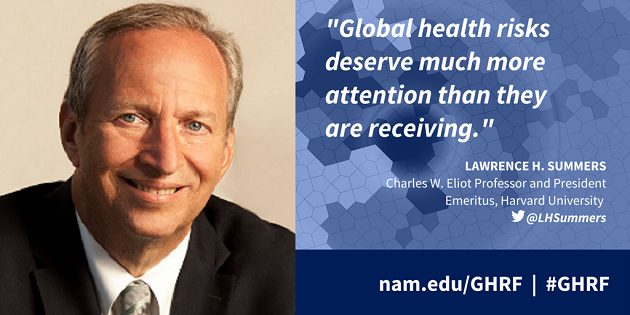 Bang for the Buck? Larry Summers and Global Health Funding

Larry Summers, I’m going to have to disagree with you.

It may seem a bit of a mismatch. Summers is a provocative and influential guy: Chief Economist at the World Bank, Treasury Secretary under Bill Clinton, Director of the National Economic Council under Obama, former president of Harvard University. He helped craft US policy in response to the Global Financial Crisis and international responses to financial problems in Mexico, Asia, and Russia in the 1990s. I, on the other hand, am a random academic whose best-selling book has finally cracked the top 500,000 on Amazon and whose office is adorned with a plush Ebola virus. Since we’re both interested in the politics of global health, though, I think we’ve got something to discuss. I bet we both liked Rogue One, too, so now we’ve got two things to discuss (but we’ll leave the latter for another time).

Summers has been speaking out lately about international investments in global health. He gave the keynote address at last November’s World Innovation Summit for Health in Doha, and he published a piece on Quartz yesterday. In both, he tried to make the case that the international community is funding the wrong things in global health. Instead of investing in domestic health systems (which, he argues, receive 80 percent of global health funding), we should be investing more in global public goods for health like pandemic preparedness, vaccine development, and antimicrobial resistance.

To make his case, he cites the example of the March of Dimes. In 1938, the March of Dimes (then known as the National Foundation for Infantile Paralysis) decided to invest its money in research to cure polio rather than buying iron lungs for patients. This, he argues, was economically rational and has paid for itself multiple times over. This is the model that we should adopt for global health—don’t invest in existing treatments or domestic public services, but invest in research and development for new treatments. He cites the new Coalition for Epidemic Preparedness Innovations (CEPI)—a new alliance announced at the World Economic Forum in Davos with nearly $500 million in funding—as exactly the sort of model he envisions.

This is where Summers’ thinking and my own diverge. I’m not against innovation in the least. (Is there anyone who is?) I’m also not reflexively against the role of philanthropies like the Bill and Melinda Gates Foundation or private sector programs like (RED) in funding global health programs. Big ambitious programs like the Chan Zuckerberg Initiative, for example, have potential promise, and goodness knows we can use all the help we can get in the global health space. From what we know of CEPI so far, it fits a similar mold—a combination of public (the governments of Norway, Germany, and India) and private (the Bill and Melinda Gates Foundation, World Economic Forum, and Wellcome Trust) monies devoted developing new vaccines. Private pharmaceutical companies may not have the economic incentive to create a new yellow fever vaccine, but CEPI doesn’t need to abide by that same logic.

This all sounds great, so what’s the problem? The problem is in the framing. Summers is basically arguing that there are limited funds available for health, so the more economically rational thing for donor states to do is invest in R&D. That misses the mark on two different levels.

Indeed, CEPI itself would seem to contradict Summers’ argument. As best as I can tell so far, the money going to CEPI is not being taken from existing global health aid pledges. It’s new money, generated because there is a specific organization and mission around which it can coalesce.

Second, while domestic health systems may seem economically inefficient, they are absolutely vital. Without strong domestic health systems, you don’t have the frontline responders you need to address a disease outbreak. You don’t have the clinics that can provide both basic health care and surveillance. You don’t have the structure that can administer the vaccines that CEPI is going to develop. By positing a choice between domestic health systems and scientific R&D, Summers’ argument threatens to weaken the very systems that are so vital to responding to any disease outbreak. The March of Dimes’ experience led to great benefits for humanity, but the March of Dimes didn’t have a responsibility to its citizens to provide some measure of public health care. It shouldn’t be an either/or argument; it should be an argument about how we can support both in recognition of their very important and complementary roles.

Summers and I agree that cross-border global public goods for health are absolutely vital, and I think we both see CEPI as offering some potential promise on that front. If he’s going to position programs like CEPI as coming at the expense of domestic health systems, then we’ve got a disagreement. (And if he likes the Star Wars prequels, too, then we’ve really got a disagreement.)