This is a guest post by Christopher Gelpi and Elias Assaf.  Christopher Gelpi is Chair of Peace Studies and Conflict Resolution at the Mershon Center for International Security Studies and Professor of Political Science and Elias Assaf is a Ph.D. candidate in Political Science at The Ohio State University, both at The Ohio State University

President Donald Trump adopted a variety of controversial and unorthodox foreign policy stances during the 2016 presidential campaign.  Since taking office, Mr. Trump has moved quickly to begin implementing many of these policies – including a border wall with Mexico, a ban on immigration from certain majority-Muslim countries, and withdrawal from the Trans-Pacific Partnership.  While Mr. Trump was very clear about his intentions during the campaign, public reaction to his implementation of these policies has nonetheless been quite negative.  Protests among left-leaning progressives in response to the anti-Muslim travel restriction are not surprising, but even prominent Republican leaders have been critical of Trump’s foreign policy actions since taking office. Moreover, according to Gallup’s tracking poll, President Trump’s disapproval rating rose sharply during his first week in office.  Within eight days of taking office, a majority of the public already disapproved of the job he was doing as President.

How was Mr. Trump able to emerge victorious in November if the implementation of his foreign policy platform makes him so unpopular in January?  Shouldn’t voters have punished him for stepping so far outside the bipartisan boundaries of American foreign policy?  And if not, why not?

We conducted an experiment in the weeks leading up to the election that randomly assigned subjects to read news stories in which Republican candidates made various foreign policy statements.  We focused specifically on American nuclear weapons policy, both because these were among the most controversial statements made by Mr. Trump, and because they received a great deal of critical attention from the media and from the Hillary Clinton campaign.

Study participants were randomly assigned to read news stories on one of three topics.  One-third read a story criticizing the Obama administration’s nuclear deal with Iran, which represents a typical Republican foreign policy position. The other two-thirds of our participants read news stories presenting more unorthodox views for a Republican candidate.  Specifically, one-third read a story suggesting that Japan, South Korea, and Saudi Arabia should be allowed to develop nuclear weapons. And the final third of the participants read a story about using nuclear weapons to destroy ISIS.  Half of the time the stories attributed the policy statements to Donald Trump, and the other half of the time the statements were attributed to Paul Evans, a fictional Republican candidate for US Senate. We then asked subjects about their attitudes toward the Iran deal, nuclear proliferation, and the use of nuclear weapons against ISIS, as well as their inclination to turn out to vote for candidates Evans and Trump.

Our results indicate that voters severely punished Paul Evans for taking unorthodox positions on nuclear weapons.  Specifically, the probability of voting for Evans dropped by 13% if the candidate endorsed nuclear proliferation or the use of nuclear weapons against ISIS.  The probability that such a decrease would occur by chance is less than 0.1%, so we can be confident that this change in support is a reaction to his policy statements. Yet those very same statements had no impact whatsoever on the propensity to vote for Donald Trump.  Evans suffered an even steeper penalty in terms of voters’ inclinations to turn out to vote, but Trump once again emerged unscathed. 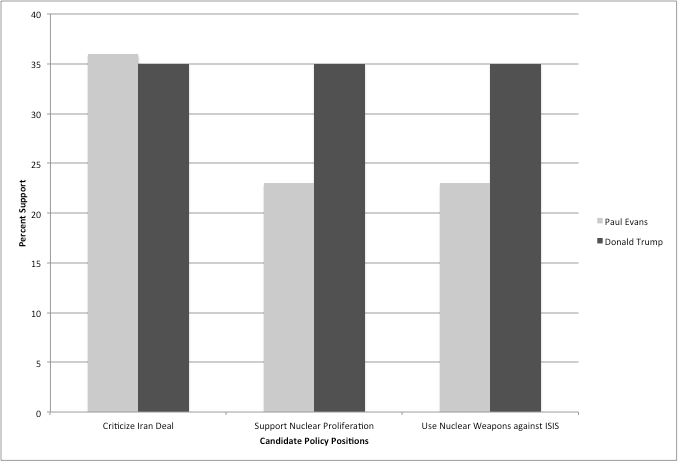 What can explain voters’ indifference toward Trump’s controversial policy stances when they react so negatively to identical statements made by other Republicans?  Do voters ignore policy positions when voting for Trump?  Does Trump persuade them to agree with him on these issues?  Or did the intense conflict of a highly partisan campaign rally Republican voters to support Trump regardless of his policy views?

Our study indicates that while Trump’s policy statements did not deter voters from supporting him, they also had very little impact on voters’ views on these issues.  Just as importantly, we find that voters did weigh their attitudes toward these policies when deciding whether or not to vote for Trump.  The figures below present the results of mediation analyses that examine the impact of Trump’s policy statements on voters’ attitudes on the issue Trump discussed as well as their intention to vote for Trump.  In addition, the analyses examine the relationship between voters’ issue positions and their vote.

Like the simpler graphic above, the mediation analyses confirm that Trump’s unorthodox policy statements had no impact on voters’ intentions to vote for him.  At the same time, we find that Trump’s statements on the Iran nuclear deal and on using nuclear weapons against ISIS had no impact on voter’s attitudes toward those issues.  With regard to non-proliferation, we do find that Trump persuaded some voters to weaken their support for America’s longstanding nuclear non-proliferation policy.  But this effect was substantively fairly small.

Nonetheless, we find that voters’ attitudes about all three of these issues are strongly related to their propensity to vote for Trump.  Moreover, we found that the positions that Trump took regarding nuclear proliferation and using nuclear weapons against ISIS were fairly unpopular among the subjects in our study.

Why did so many voters express an intention to vote for Trump despite his unorthodox, unpopular, and unpersuasive policy statements?  Our results indicate that the highly partisan and polarizing nature of the 2016 presidential campaign led many Republicans to vote for Trump despite their policy disagreements with him.  Specifically, we conducted a statistical analysis that accounted for partisanship, political ideology, foreign policy hawkishness, and a variety of voter demographics.  While the effects of political ideology on support for Trump and Evans were quite similar, we found that party identification had more than three times as large an impact on voters’ intention to vote for Trump.

For example, controlling for the impact of various other factors, we found that Democrats and Independents were more likely to vote for Evans than Trump by a margin of about 35% to 25%.  But among Republicans Trump’s support increased dramatically to 75%, while Evans’ support increased only modestly to 45%.  This 30% increase in support from Republicans that Trump enjoyed as the Republican nominee seems to have insulated him from the impact of his controversial foreign policy statements that damaged support for the Evans. 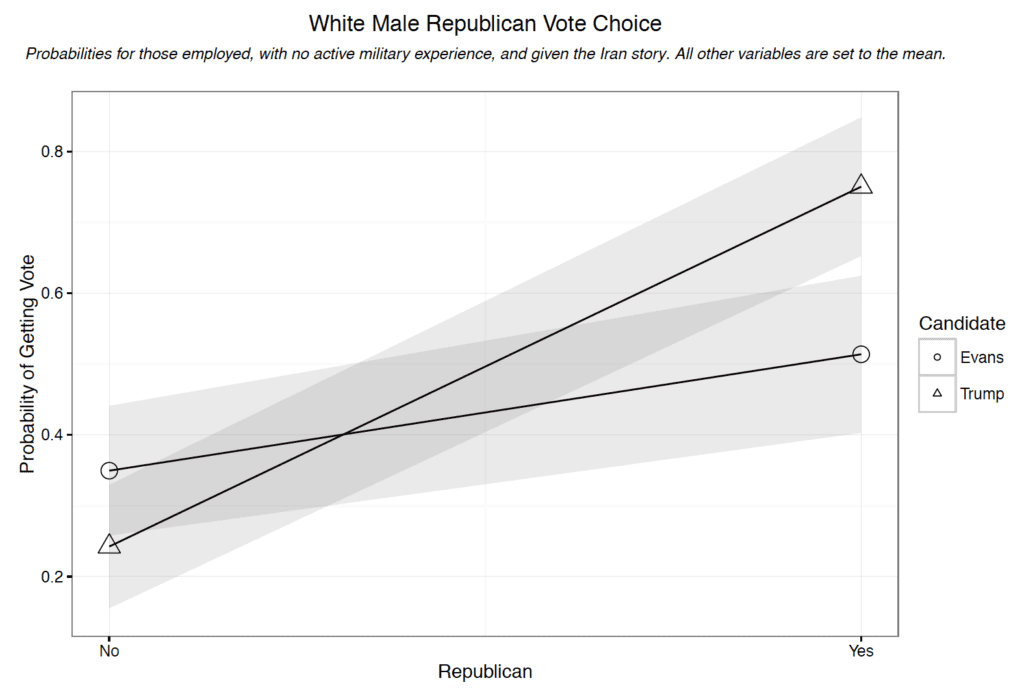 Many observers have bemoaned the partisan, bitter, and polarizing nature of the 2016 presidential campaign. Our study suggests that among the most disconcerting consequences of this polarization is that party loyalties have become so strong that party nominees can succeed even when their policy stances conflict with the leadership and much of the rank and file of their own party.  Nonetheless, our study also indicates that voters still consider policy positions when determining their vote. Moreover, we find that candidates have only a modest ability to shape voters’ preferences on these issues. Thus if future campaigns are contested in a less polarized environment, we can hope that the victorious policy platform may more closely reflect the policy preferences of the American public.

Tempo, Protest, and Emergency Ethnography in the Trump Moment