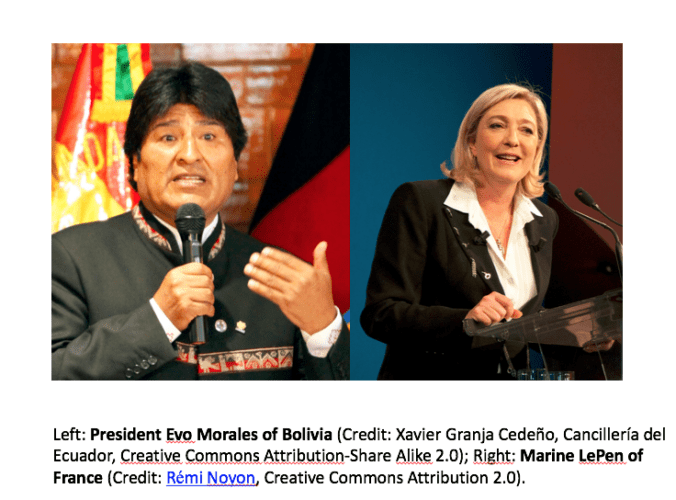 This World Politics in a Time of Populist Nationalism (WPTPN) guest post is written by Malliga  Och and Jennifer M. Piscopo. Dr. Och (on Twitter @malligao) is an Assistant Professor in the Global Studies and Languages Department at Idaho State University. Her research focus on women’s political representation in conservative parties and she is the co-editor with Shauna Shames of The Right Women. Republican Activists, Candidates, and Legislators (forthcoming Praeger Press, 2017).  Dr. Piscopo (on Twitter@Jennpiscopo) is Assistant Professor of Politics at Occidental College and a 2016-2017 Visiting Scholar at the David Rockefeller Center for Latin American Studies at Harvard University. Her research on women, representation, and gender quotas has appeared in numerous academic journals.

Donald Trump swaggered along the U.S. campaign trail, a hyper-masculine figure whose braggadocio extended to celebrating sexual assault. In France, Marine le Pen clothes anti-Muslim rhetoric in language about protecting women’s equality, rights, and bodily freedom. The majority of white women and men voted for Trump, but with a notable gender gap of 53 and 63 percent respectively. By contrast, the gender gap for populist support is narrowing in France, with Le Pen gaining support among female voters (Mayer 2013, 172). Populist movements have differentially affected men and women in their roles as party leaders, parliamentary candidates, and voters, but these outcomes are not consistent across regions or cases (de Lange and Mügge 2015; Kampwirth 2010). Yet understanding the gendered dimensions of the populist resurgence is critical for explaining why and how these parties cement their appeal.

Using examples from Latin America and Western Europe, we argue that today’s populist parties exhibit an interesting paradox between emphasizing traditional social values and tapping into women’s political ambitions to move from support roles and to the frontlines. Related, whom populist parties frame as the “other” shapes women’s opportunities as leaders and candidates, as well as the campaign rhetoric. As scholars long have noted, populism is characterized by the direct, unmediated relationship between a charismatic leader and “the people” (Kampwirth 2010), who are usually in opposition to an internal or external enemy. The framing of this enemy critically shapes the gendered effects of populist movements.

In Latin America in mid-century, right-wing leaders mobilized against the perceived communist threat. Contemporary left-wing populists and ethnopopulists—such as Hugo Chávez in Venezuela and Evo Morales in Boliva, respectively—mobilize against the traditional economic elites, who are largely of Hispanic-origin. Because these economic elites cooperated with international development agencies to implement neoliberal reforms, left-wing populism in Latin America commonly takes an anti-imperialist bent.

Mobilization against these two different enemies—communism in mid-century and imperialism today—has both benefited and restricted women’s rights. On the one hand, the pressure to appear politically and economically modern has led Latin America’s populist leaders to grant women certain benefits, such as labor and voting rights in the mid-century and access to day care crèches and family subsidies today (Kampwirth 2010; Hall 2006). On the other hand, these benefits incorporate female citizens into the polity by relying on traditional gender norms. Both right- and left-wing populism in Latin America expresses hostility to or skepticism of feminism (Kampwirth 2010): anti-communists championed traditional family values as necessary for stabilizing the nation, and anti-imperialists argue that feminism reflects the concerns of upper-class, Hispanic-origin women, while overlooking the marginalization and struggles of poor or indigenous women. And because some indigenous traditions emphasize gender complementarity over gender equality (the notion that women and men are equal in their different social roles), indigenous women face uphill battles to participate in political parties that champion multiculturalism and inclusion while remaining highly patriarchal (Htun and Ossa 2013; Rousseau 2011).

In Europe, the “other” are immigrants, largely of Muslim origin, whom populist right parties see as threatening traditional Western ways of life (de Lange and Mügge 2015). As a result, the gendered implications of populist mobilization in Western Europe have varied considerably from those in Latin America. In particularly, populist movements and parties across Europe have turned their attention to gender equality (at least insofar as it benefits white women), claiming that Muslim immigrants pose a threat to women’s equality and freedoms and citing forced marriage, child marriage, and honor killings as examples of anti-women and anti-Western values (De Lange and Mügge 2015; Meeret and Siim 2013). Le Pen offered an illustrative example when she evoked feminist writer Simone de Beauvoir in an op-ed, citing the sexual assaults of Cologne on New Year’s Eve 2015 to argue that Muslim immigrants threaten the bodily integrity of European women.[1]

Yet this policy stance is Janus-faced (Akkerman 2015): populist parties stress gender equality in terms of anti-immigration policies and an anti-Muslim agenda, but often maintain a conservative stance emphasizing traditional family roles and rejecting pro-abortion policies (Spierings et al. 2015). Though right-wing populist parties might use liberal feminism and the language of gender equality instrumentally, this ideological reinvention could draw more female followers in the future, and it might even open the door to women’s presence as party leaders and elected representatives. Today, the Alternative für Deutschland and Le Front National are each led by women, Frauke Petry and Marine Le Pen, respectively. But though they are currently the highest-ranked female leaders, they are not the only ones: both vice-chairmen of the Swedish Democrats are female, and the AfD also has a female vice-chair. In the United Kingdom, the UKIP had a female leader in late 2016.

That European populist parties have been less skeptical of feminism—and even leveraged equal-rights claims in service of anti-immigrant agenda—perhaps explains why women have emerged to lead populist parties in Europe. No women formally head populist parties in Latin America. Here, populist leaders have cemented their leadership by relying on hyper-masculine tropes, describing their nations and their policy objectives in heavily militaristic and/or patriarchal terms (Kampwirth 2010).

The absence of women as formal party leaders does not, however, mean that women have played no role in the region’s populist movements. In mid-century, conservative women mobilized to defend the nation against communism and atheism, rallying (literally) behind Nicaragua’s Somoza dictatorship (González 2001). In the contemporary ethnopopulist movements in Ecuador and Bolivia, indigenous women—often in alliance with urban feminists—successfully fought to include gender parity in their nations’ constitutional reforms (Rousseau 2011). Framed in terms of equity in order to underscore complementarity rather than equality, parity requires that women hold 50 percent of executive, legislative, and judicial posts at all levels of government. Women currently occupy the majority of seats in Bolivia’s lower house and 41.6 percent of the seats in Ecuador’s unicameral assembly. Nonetheless, indigenous women face enormous hurdles to running for and holding political office, including high rates of physical and sexual assault, abductions, forced resignations, and even murder.

The complex gendered dimensions of populist parties are reflected in their support among male and female voters. European men generally vote for populist parties at greater rates than women (Hartefeldt et al. 2015; Mayer 2013). Three factors seem to give right-wing populists an advantage with male voters: (1) men, who are the majority of unskilled workers, tend to be globalization losers; (2) women are more religious and churches so far have rejected the xenophobic message of populist parties; and (3) the support of traditional family values is less attractive to women raised in more gender-equal societies (Mayer 2013). While women seem still put off by the message of traditionalism, violence, and hatred embraced by Europe’s right-wing populists (Givens 2004), this trend might reverse if populist parties continue to advocate for progressive causes, especially (white) women’s equality. Recent economic changes, such as the increased importance of the service sector, means that European women will also start to experience the negative effects of globalization, including low-paying wages and competing with immigrants for unskilled jobs. Together – progressive causes plus women’s rise among unskilled (service) labor – might make women more receptive to the message of populist parties (Mayer 2013).

What, then, does this mean for the future of women’s political representation within populist parties?  In Latin America, support for populist parties is declining, rather than rising. Right-wing, neoconservative, and decidedly not populist governments are dethroning leftists throughout the region. The gender-equality gains of left-wing populist governments, especially in terms of women’s political representation, appear under threat. Indeed, one of the first actions of the new Brazilian president was eliminating the Ministry of Women, Racial Equality, and Human Rights.

Western Europe thus offers a more “optimistic” story about the leadership and policy gains for women under populism. These gains should not be idealized: they cement xenophobia and favor Eurocentric notions that privilege white women’s wellbeing over non-white women’s agency and inclusion. Nonetheless, they show that populists can supplement a traditional gender ideology with support for women’s rights. Whether these policy changes are enough to attract more female support and create greater roles for women within the party, however, remains to be seen. Women have made more inroads as candidates—but not leaders—of ethnopopulist parties in Latin America. Populist movements clearly use gender strategically, adapting over time: gender defines their enemies as well as shapes the leaders’ image, her proposals, and her rhetoric. Understanding these dimensions reminds comparative politics scholars that women and men will not experience the populist resurgence in the same way.

[1] The one exception to this trend is the AfD in Germany. While the AfD supports the European welfare model and formal gender equality, the party also emphasizes strong traditional and natalist family values, is anti-abortion, and opposes marriage equality, affirmative action, gender mainstreaming, gender identity politics, and gender studies.