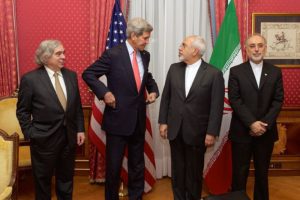 Since the U.S. election Iranian-American relations have gone into a rapid tailspin, with Iran reacting to the triumphalist tenor of the Trump campaign and the improvised response of former National Security Advisor Michael Flynn that sought to “put Iran on notice.” The arrival of his replacement in General H.R. McMaster offers the U.S. a fresh opportunity to tone down its approach to Iran, beginning with guarding against any dramatic escalation of the stakes.

For unless the Administration is actually willing to go to war with Iran, this confrontation actually won’t get the U.S. anywhere useful. What it will do, which is already under way, is strengthen the hardliners in Tehran and undermine moderates like President Rouhani and Foreign Minister Zarif at a precipitous moment less than three months ahead of the Iranian election.

The Trump team does not have a strategic plan in place, regarding Iran or any other region/country of the world for that matter. But this matters most regarding countries currently in crisis accretion mode vis-à-vis the U.S., specifically Iran, Russia, North Korea, and China (in descending order). The danger of rapid escalation with Iran that could easily slip into spiraling conflict is acute. Therefore the first order of business for NSA McMaster is to get the U.S. on a more strategic track that militates against a burgeoning conflict with Iran.

Relations skidded rapidly out of control due to Flynn’s hang-up with Iran, and it has partially responded in kind. This was unnecessary, for although the Obama Administration had veered a little strategically off course itself, the previous U.S. foreign policy team had made considerable progress with improved relations with Iran based on its negotiation of the nuclear deal and evidential adherence to it.

The Iran nuclear deal is imperfect, but in spite of its limited objectives it had been working and needs to be kept in place and adhered to by all parties. Except for a few extremely minor violations, Iran has fully lived up to the accord. And when the IAEA pointed out the marginal violations, the Iranians quickly corrected them. In fact the Iranians themselves – including Supreme Leader Khamenei – not only have been abiding by it, but the regime continues to support it.

Let’s be clear about what the nuclear deal accomplished and what it did not: on the one hand, it kept Iran from being attacked and allowed the U.S. to avoid attacking Iran. It furthermore halted the Iranian pursuit of nuclear weapons in the near term, and allowed Iran to achieve sanctions relief in exchange. On the other hand, this delimited and circumscribed agreement did not open up the regime to further change, which is something that Khamenei and his cohorts would not entertain. While many at the time held out hope that Iran might engage in more progressive understandings with the West, in terms of the deal itself this was not on the cards.

The deal potentially provided something to build on in terms of mildly improved relations due to the decreased risk of a confrontation, but not because of something intrinsically progressive about the deal. As it happens, even those who were guardedly accepting of the deal knew that in the immediate aftermath Khamenei would allow for a push out from the hardliners, whom he had kept in check while the deal was negotiated; and this in fact is what took place.

Thus, for anyone who wanted to test the hypothesis of whether the deal could be built on in any tangible manner, the key to this was for the West to engage in behavior that strengthened the moderates and undermined the hardliners. In terms of how the deal affected the different distinct elements of the regime in its immediate aftermath, the moderates were strengthened. Because of this, the Supreme Leader needed to allow the hardliners to begin maneuvering more outwardly (and achieving some of their aims) at least for a delimited period.

It was thus important for the West to avoid slipping into the stereotypical mistake of viewing Iran as a unified regime, and for example viewing any “bad behavior” as necessarily representative of the behavior of the regime as a whole. All along the hardliners have had staunch incentives to “act out” and play a spoiler roll concerning the deal. The only factor keeping them intermittently hemmed in was the balancing leadership of Khamenei.

For the moderates had been incentivized to get the deal done and move swiftly into a period of increased economic growth and an overall upswing in the economic set of circumstances of the country. It was thus incumbent on the U.S. and the West gain a full understanding of this, specifically that President Rouhani and his allies have needed to demonstrate that their claims prior to the deal were going to come to pass, viz. that it would lead to improved measurable economic progress for the country.

The Obama Administration seemed to get this, the first step of which was to end the U.S. sanctions against Iran’s nuclear program. But because other U.S. and western sanctions concerning Iran’s alleged terrorist activities remained in place, and because international banks remained highly skittish about Iran, gradually the Obama Administration actually took its eye off the ball, either not sufficiently understanding this imperative – to help Iran’s economic progress, so as to strengthen the moderates – or failing to follow through sufficiently.

In fact, well before the Trump Administration took office – with a predilection among Flynn inter alia to be harder on Iran – the Obama Administration failed to take enough steps to keep the moderates from being undermined over time. Not only were other sanctions still in place, but international banks and firms were afraid of running afoul of U.S. Treasury and remained fairly frozen for some time.

The Obama Administration took too long in finally manufacturing the Boeing deal, as well before this it was already clear that the moderates’ prospects were diminished due to the regime/country not experiencing the expected economic fruits from the lifting of nuclear sanctions. The Airbus deal also presumably helps, the problem being the difficulty with these developments’ ability to trickle down to average Iranians and meet their desire for a rising economic tide that lifts their own boats.

Thus even prior to the U.S. election the dynamics inside Iran were trending well in favor of the hardliners, as increasingly Khamenei allowed the Revolutionary Guard and others to begin increasing their support for Shia militias in Iraq, the Houtis in Yemen, and Hezbollah in Syria — all of which had been reined in to a significant degree in the run up to and during the Iran deal negotiations.

Over time, as momentum shifted back in favor of the hardliners inside the regime (and against the moderates), there again lay evidence all over the regional map of Iran acting against western interests. The problem was that this gave unnecessary credence to criticism of the deal from Israel and Republicans in Congress, allowing them to act like Iran had been engaging in nefarious activities the whole time.

However with Rouhani’s election coming in May, the window for strengthening the moderates may be rapidly coming to a close. For example, placing the IGRC on the terror list is ill advised, for this would be an escalatory move right when it is imperative to de-escalate. The same pertains to movement in Congress to impose fresh sanctions on Iran for its incipient missile testing, when this was not covered by the nuclear deal. Such a move would invite and even presage Iranian retaliation.

Understanding what strategically was at stake, it was clumsy to “put Iran on notice” as the Trump Administration had not thought through the next several moves on the chessboard. Adding the new “small ball” sanctions was unhelpful, for right on time this engendered additional missile launches and incendiary rhetoric from Iran.

For now the Trump team risks not only the repercussions from what could be a highly destabilizing escalation, but already it is making the same mistake late second term Obama Admin did, only it is going much further specifically by engaging in behavior that far more concretely is directly strengthening the hardliners and dramatically undermining the moderates.

As of now, if de-escalation were to occur, Iran will continue to adhere to the deal; if escalation becomes the order of the day instead, at some point Iran will in fact move to violate the deal. But even with de-escalation, in strategic terms picking a fight with Iran may provide nice red meat for the Republican base and give something on which the Israelis and the new Administration can have a meeting of the minds. Yet in doing so it is making a significant strategic error that will harm U.S. national security interests viz. by destroying the prospects of Iran’s moderate regime members entirely.

At least the very latest signs from Iran are somewhat positive. A much-expected celebration of the founding of the Islamic Republic — and expected heyday for the hardliners — turned out to be not only muted, but excessively so (a clear sign of at least intermittent moderation from the top leadership). In addition, a series of prominent hardliner clerics — including some of the leading clerics in Qom — in recent days have publicly expressed support for keeping the nuclear deal in place. There are also signs that hardliners may not mount their own campaign for the presidency in May.

But as we saw in the immediate aftermath of the agreement of the deal, Iran is always careful to intermingle moderate moves with harsher moves such as this week’s war games, smaller rocket firings, and additional incendiary rhetoric from the IRGC. Deft strategic acumen in required to sift through these seemingly contradictory gambits, for there is always a portion of this that is intended for domestic audiences and a need especially among hardliners to save face in terms of the perceived provocations coming from the U.S.

Thus it would behoove the Administration and Congress both to tread warily vis-à-vis Iran and only in accordance with a strategic plan in place. Unless the U.S. is planning to veer strategically off course and into unnecessary and unwise paths toward conflict – exactly what is happening with China at present – it is time for cooler heads and deeper strategic thinkers to come to the fore.

Trump Reminded Me Why I Am An Academic