Trump Wants People to “Study the World!” IR Scholars Can Jump All over This. 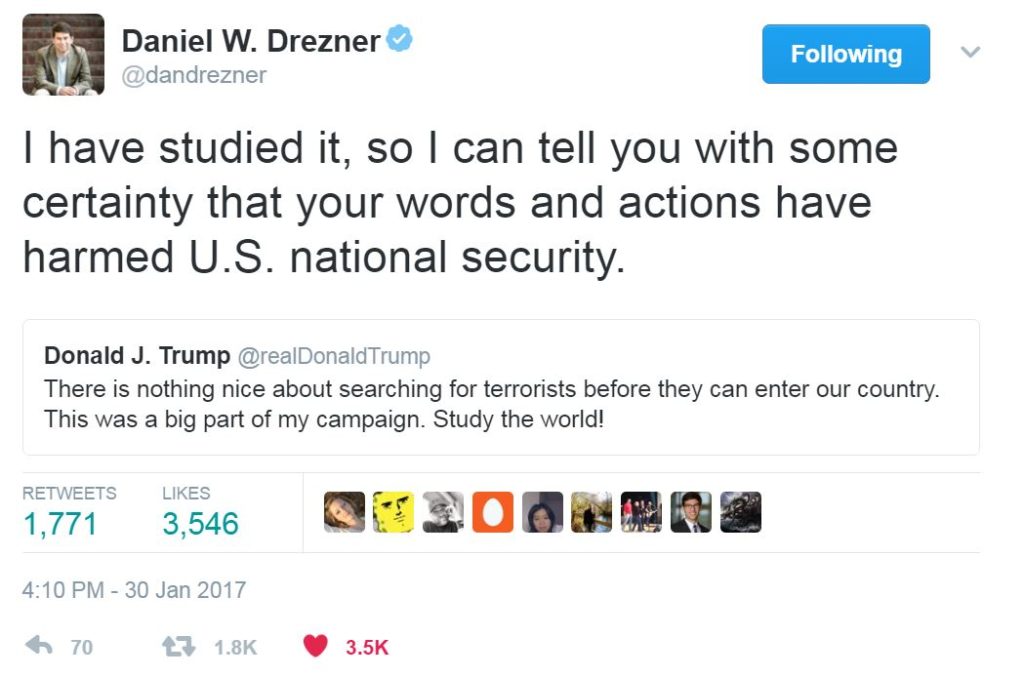 “Study the world!” brayed Trump on Twitter last week, in defense of his travel ban. Dan Drezner, who studies the world for a living, shot back:

“I have studied it, and I can tell you with some certainty that your words and actions have harmed US national security.”

As you can see, with these three little words Trump has handed IR scholars both a challenge and a natural rallying cry in the run-up to #ISA2017 and the March for Science on April 22. If IR scholars are good at anything, it’s studying the world, and if a President ever needed our advice from IR scholars, it’s this one who doesn’t seem to know nuclear weapons from climate change.

So today, I propose the following social media challenge to my fellow IR scholars: condense the most useful finding, fact, or causal truth YOU’VE learned by “studying the world” into a pithy remark of no more than 125 characters. Tweet it to @realDonaldTrump with the hashtag #StudytheWorld! Then go on Facebook and post it on your wall with this message:

IR Scholars #StudytheWorld! Facebook Contest: Duck of Minerva is crowd-sourcing pithy IR knowledge to share with Trump today. Leave a simple, policy-relevant causal truth or evidence-based claim about global politics on your wall with the hashtag #StudytheWorld! Tag three friends who are professors of global affairs or comparative politics and ask them to do the same. If you like, add a link to a book or study President Trump should read. The best replies will be featured in a special future post.

Congress is Trying to Remove Bannon from the National Security Council. Here’s Why It Matters.

Too much empathy in Israel-Palestine?