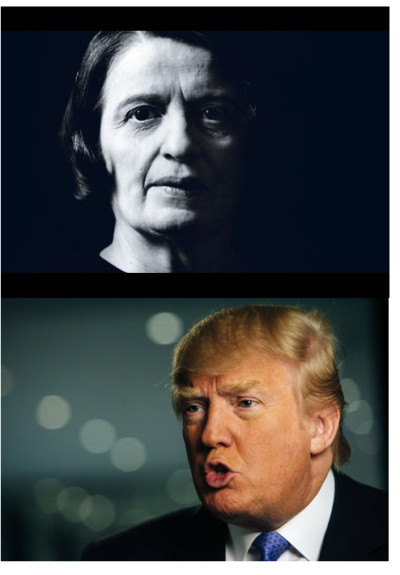 This is a guest post by Zachary C. Shirkey, an Associate Professor of Political Science, Hunter College, CUNY.

Attempts by observers to give Trump’s foreign policy some coherence by finding an underlying ideology that motivates it have largely focused on Jacksonianism. Certainly, aspects of Trump’s outlook and those of a number of his advisers fit the description of Jacksonianism. Jacksonians see US interests in white ethno-nationalist terms and they emphasize strength, unilateralism, self-reliance, and coercion. Jacksonians also seize upon simple solutions for complex problems. Early Trump policies and goals such as protectionism, the proposed border wall with Mexico, and the Muslim immigration ban fit into this worldview.

While such a description of Trump’s worldview has much to recommend it, focusing solely on Jacksonianism risks missing another important influence on him and his advisers: that of Ayn Rand. Many current Republican officials cite Rand as a major influence on their thinking. Trump himself has spoken favorably of Rand’s novel, The Fountainhead, and its hero Howard Roark. Likewise, both Secretary of State Rex Tillerson and CIA Director Mike Pompeo have spoken highly of Rand. This is not to claim that all of Trump’s key advisers admire Rand’s works. Steve Bannon—the adviser whose views perhaps most closely align with the white ethno-nationalist component of Jacksonianism and who has cited influences as diverse as Lenin and the Italian reactionary Julius Evola—is strongly averse to Randianism. Still, enough members of the Trump administration admire Randianism that it needs to be taken into account when thinking about Trump’s likely foreign policy.

Jacob Hacker and Paul Pierson argue in their recent book, American Amnesia, that the Randian worldview has several important elements when it comes to governance. Taken together these elements make Randianism distinct from traditional conservatism or libertarianism. These elements are as follows. First, Randians see government as always being harmful rather than at times fostering environments where all parties gain. Second, Randians see the world as constant sum. In other words, any gain for one side is a loss for the other. Third, Randians see the world as divided between makers and takers.

Thus, much of the world is freeloading off of those who are productive. Last, Randians engage in the adulation of business leaders. Business leaders are seen as noble, solitary heroes who have special insights into how the world operates. These heroes can save society, but only by contending against existing social conventions and overcoming the constraints that have been placed upon them. They must be willing to blow up the whole system if need be.

The Randian framework is generally used to analyze contemporary domestic policy debates, but it can also be used to understand Trump’s foreign policy instincts. While there is overlap between Randian and Jacksonian views—unilateralism and a narrow emphasis on American material interests most notably—the implications of each ideology are not identical. This makes it important to think through the implications of a Randian worldview when it comes to US foreign policy.

To start, if one sees international organizations and international law as equivalent to government, then it becomes imperative for the Randian to destroy such institutions and laws. Trump has repeatedly expressed profound distrust of international institutions, including institutionalized US alliances such as NATO. He has called the United Nations “obsolete” and “a waste of time and money,” has threatened to pull out of the World Trade Organization, and is profoundly disinterested in arguments based on international law. It also explains why he is so critical of the European Union and such a vocal champion of Brexit even though the United States is not directly involved.

In other words, the Randian worldview pushes Trump and his advisers to favor the dismantling of the international organizational architecture that the United States and its allies have worked so hard to construct over the last 70 years. Rather than seeing these institutions as enhancing and legitimizing American power, Randians see them as inherently malign bodies that choke off creativity and freedom of action. It also helps explain why Trump sees Russia and other right-wing authoritarian countries as potential allies as they too want to weaken international institutions and law.

Next, Trump sees foreign policy as a series of one-off agreements that have winners and losers. He bemoans what he sees as a series of “bad deals” made by the United States with other countries. Agreements in his view do not make both sides better off; hence his view that since other countries have often benefited from alliances and trade agreements with America, the United States must have been taken advantage of. This is why Trump’s main concern about NATO is whether other states are paying their fair share in terms of defense expenditures. While concerns about freeriding are legitimate and go back to the earliest days of the alliance, to judge the value of NATO solely in terms of relative defense spending and not on whether it serves overall US security interests is new.

More broadly, Trump sees the United States as a maker and our allies as takers, rather than that both the United States and its allies benefit from their agreements with each other. Mutual benefit is impossible given the Randian view that the world is constant sum. In a world where only one side can benefit from agreements and there are no long term gains, international cooperation becomes almost impossible. Executing a foreign policy based on such views of winners and losers will undermine long-standing US alliances and slowly isolate the United States from its potential friends.

Finally, both Trump’s belief in his own ability—he has argued that he alone can save the country—and his willingness to engage in provocative bluster fit with the Randian view of business leaders as heroes who must disregard social norms to achieve great things. He has repeatedly praised his own abilities, often in superlative terms. He has claimed he has “the best words,” one of the “best temperaments,” that he would be the best at negotiating peace, and would be the greatest jobs producer ever.

Likewise, he is unwilling to restrain his rhetoric or abide by diplomatic norms. His willingness to insult close allies, including harshly scolding the Prime Minister of Australia, is particularly striking. While disagreeing with allies is normal, berating them is not. This is consistent with a Randian view that “truth-telling”—an odd phrase to associate with Trump to be sure—and a willingness to destroy existing conventions and norms is required of the hero so that the makers can triumph over the takers. In other words, his appalling, undiplomatic rhetoric is not simply a personal trait, but is consistent with a Randian worldview.

All of this is to suggest that Trump’s actions during the first few weeks of his administration and his rhetoric during the presidential campaign are indicative of what the next four years will bring. His actions and bluster are not primarily the result of inexperience, but rather are consistent with Trump’s Randian worldview—a worldview that many of his advisers share. While Trump’s foreign policy cannot be understood in these terms alone—the Jacksonian analogy remains apt and certainly his family’s business interests will also matter—Randianism plays a vital part.

It is the Randian viewpoint that will push hardest for dismantling the post-World War Two international order that previously both Republicans and Democrats have supported. Given that this order has benefited the United States immensely and helped bring peace and economic growth to much of the world, its dismantling should not be undertaken lightly as it reconstruction could well prove impossible. Thus, to understand the Randian elements of Trump’s foreign policy is to see how sharply it diverges from several generations of American foreign policy and the danger it truly poses to long-term US interests.