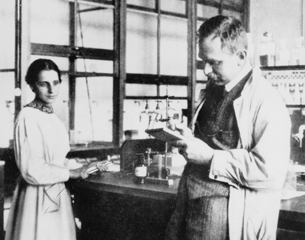 Women in academia do not enjoy an easy ride. Even though “manel” count at this year’s ISA was much lower, there is still work to be done. Not to mention the recent scandal about the epidemic levels of  sexual harassment at the UK universities. But let’s rejoice at the thought that a mere hundred years ago things were much worse. My university campus in Bremen has a Lise-Meitner-Strasse and the International Women’s Day is a good opportunity to share her story. In short,  Hidden Figures needs to have a German prequel.

Lise Meitner was born in 1878 into an upper-class Jewish family in Vienna that encouraged her scientific curiosity. Given that women were not allowed into institutions of higher education (just over a 100 years ago, Carl!), her parents hired private tutors that fostered her passion for physics. In 1905, she became the second woman in Austria to receive a doctorate in physics.  She went on to study in Berlin where Max Planck allowed her to attend his lectures – normally only men were admitted.

Despite her valuable contribution at the Kaiser-Wilhelm-Institute in Berlin, she worked as an unpaid assistant with Otto Hahn. She received her first official position at the age of 35. In 1922, she discovered the cause of the emission from surfaces of electrons with ‘signature’ energies, known as the Auger effect, named after Victor Auger who discovered it a year later. Lise Meitner was the first female full professor of physics, praised by Albert Einstein as “German Marie Curie”.  Her research led to the discovery of nuclear fission, a breakthrough, for which her male colleague Otto Hahn was awarded a Nobel Prize. Not to mention that when the editors of Brockhaus Encyclopedia asked “Herr Meitner” to write an entry on radioactivity and discovered she was “Frau Meitner”, her entry was excluded from the publication.

In her later years, Lise Meitner’s research was more widely recognized and she even had an opportunity to run her own lab in Sweden. There is even an element named after her in the periodic table (Meitnerium, 109) and in 2010 the Otto-Hahn Building at the Free University Berlin was renamed into Hahn-Meitner-Building.  If you think about it, the photo above represents most of Lise Meitner’s life: a male colleague in the foreground, taking credit for the work that she also accomplished.

Women could only be “muses” or “assistants”. Leo Tolstoy’s wife Sophia was editing his brobdingnagian manuscripts and taking care of their finances while the writer was going after female peasants in their estate. Camille Claudel was only known as Rodin’s wife despite her own artistic achievements. Gala ensured that Salvador Dali became a well-known and expensive brand. Even women who served in the Red Army in Russia during World War II were often forced to conceal their service and ranks, because, despite the seeming emancipation and several celebrated female fighters, on the grass root level it was widely believed that a woman could offer only one “service” in the army.

That’s why it angers me to no end when pundits all over the world want to go back to some mythical “great times” with “traditional values” and “spiritual bonds”. Go back to times when women were not allowed to study, vote, have a bank account or even wear underwear that covered their crotch?