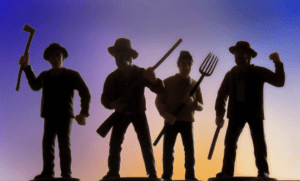 Being an ally–Pitchforks not required

Most of the data I presented in my last post came from the American Political Science Association (APSA) and examined the outcomes for job-seekers on the U.S. job market. As you may recall, one of the big takeaways was that early career scholars on the job market are now more likely to end up in non-tenure track jobs than in tenure-track positions. While all races/ethnicities and genders are impacted by this trend, long-term data show that women in particular are more likely to end up in teaching-intensive contingent positions, and job seekers from graduate programs outside the top two quintiles are far less likely to receive tenure-track job offers as ABDs.

Knowing all this–and having myself spent years in both full- and part-time, non-tenure track faculty positions–I was disappointed to find that APSA’s strategic report for 2017-2019 is completely silent about the needs of contingent faculty or adjuncts in the profession. APSA’s plan certainly highlights broad goals that are relevant to everyone in the profession, things like academic freedom and a commitment to diversity, but an overarching goal aimed at promoting support for early-career political scientists emphasizes benchmarks including increasing membership, data collection, and promoting quality teaching–without once acknowledging the precarious situation of many early-career scholars.

Attention to these issues matter, because non-tenure track faculty are not only precariously situated, we’re also underresourced. Data from last year’s survey of faculty salaries in Political Science indicated that newly hired, non-tenure track faculty at private institutions are making on average $14,000/year less than their tenure-track peers. At public institutions, the pay gap widens to nearly $20,000. Historically, the presumption has been that non-tenure track faculty are paid less because they are expected to teach, not to do research or service. But as more faculty are hired off the tenure track, expectations rise. At institutions where I’ve been employed, I have seen non-tenure track faculty perform or be asked to perform tasks including advising student groups, serving on undergraduate or graduate thesis committees, coordinating guest speakers, participating in recruitment and orientation events, and serving on departmental/university committees. A non-tenure-track faculty member who is active in research will of course also be asked to provide service to the discipline: Acting as chair/discussant at conferences, reviewing for journals, etc. The myth of being in a non-tenure-track position is that we aren’t paid for service work because we can say no. In reality, for someone who knows that their ability to get the next position is heavily dependent upon being seen as a team player in their current position, saying no isn’t really an option–And as it goes for service, so it goes for research. Shelving research while in a contingent position is not an option, but the lack of startup funds for non-tenure-track faculty often means that we have to make room on an already crowded plate to seek out external funding sources.

Contingency has been a matter that professional associations across academia have struggled to deal with. Among contingent faculty in Political Science and International Studies, there is a real sense of frustration that the same conversations take place nearly every year at meeting of APSA and the ISA, with very little in the way of results. While professional associations admittedly have little sway over policies at the university or department level, themes that have emerged at past conferences include frustration over income-based membership fees (which presume that one knows what one’s salary will be in 12 months) and conference registration fees that offer discounts to students, but not to adjuncts and temporary faculty. This becomes a real concern considering how many of us are paying out-of-pocket for these costs–with partial or no reimbursement from our institutions. In my case, I’ve been lucky enough to have travel funds at all the colleges where I’ve worked, but my travel allowance has at times been as low as $450 for the entire academic year. In 2017, a regular-price member registration at APSA 2017 will be $350. Professional associations may not see contingency as an existential threat at this time, simply because we keep paying. But the attitude is short-sighted, and non-tenure-track scholars in particular will eventually stop shelling out for organization memberships, section memberships, conferences, etc., if their salaries remain stagnant and their travel funding is nil.

While my discussion in these posts has looked mostly at the status of contingent faculty in the United States, at this year’s ISA I had the chance to speak with contingent faculty from other countries, including Canada, the UK, and Australia. The themes they expressed were largely the same: Low pay, limited resources, poor opportunities for those with families, constant anxiety, and an overarching sense that the rest of the discipline simply sees us as worth less than our peers who are on the tenure track. But the ranks of contingency are growing across higher ed, and there is no sign that this trend will reverse itself.
In the span of ten years, at least here in the U.S., the landscape of the discipline has changed tremendously, but the treatment of contingent faculty unfortunately has not. As I said at a roundtable at ISA last month, what contingent faculty need most are allies. That doesn’t mean your colleagues expect you to mount a pitchfork-wielding march to the administration building (although, if you want to, fine). If you are on a search committee, advocate for qualified candidates even if (especially if) their CV includes time spent as an adjunct or “visiting” professor. If you are considering a new research project, ask yourself whether you could co-author with a non-tenure-track colleague. If you are a member of a labor union, ask what it’s doing for contingent faculty. But, even if you can’t do these things, get to know your contingent faculty colleagues and understand how they are treated at your institution. And next time APSA or ISA rolls around, consider asking the associations to whom you pay your dues what they are doing to ensure more equitable treatment for those in contingent positions.