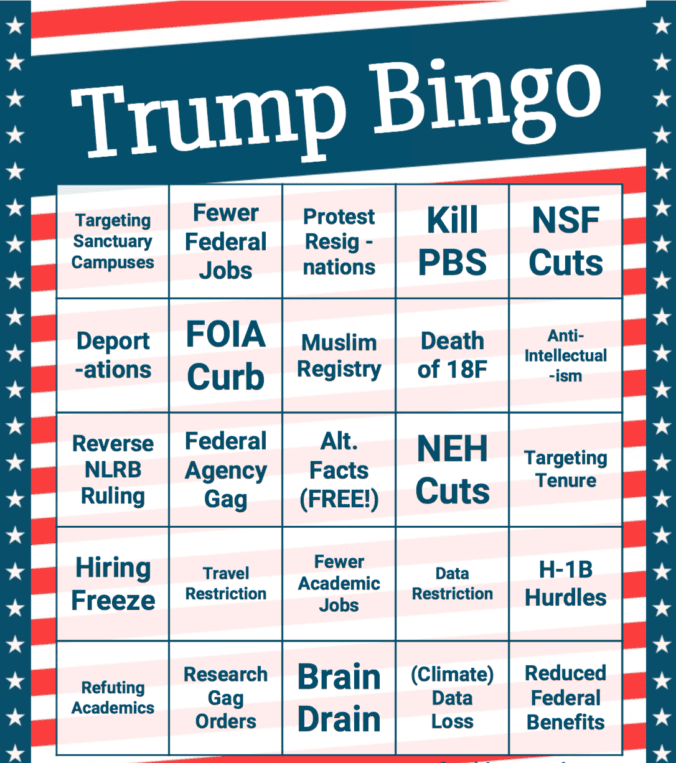 This is a guest post from Ariya Hagh, Andrew Szarejko, and Laila Wahedi. All three authors are doctoral students in Georgetown University’s Department of Government. Author order is alphabetical by last name.

In a December 2016 post here at the Duck of Minerva, we considered how a Trump presidency might affect doctoral students within our discipline. We necessarily relied upon statements that Donald Trump and his advisors made before the inauguration. Now that we are more than a month into the presidency, it is worth revisiting our claims to see what we got right and what we missed, while addressing what you can do about it.

We argued that a Trump administration would likely yield reduced access to government data, less federal funding, a tougher job market, obstacles to activism and teaching, and greater insecurity for international students. Unfortunately, many of these predictions are already coming true. To keep track of what has and hasn’t happened, you can use the handy bingo card attached here. When you win, everyone loses.

While the Obama administration had a public commitment to open government data, the Trump transition team did not. We argued that the Trump administration could have a negative impact on data access.

Overall: ✔ Data access is being restricted. We expect that trend to continue.

Consider contributing to one of several initiatives underway to preserve government data. If data you needed is gone, it may still be hosted by one of these initiatives. Websites like archive.org and google’s website caching provide access to sites that have already been taken down. Relatedly, Code for America is still hiring.

Get help with your FOIA requests. They move faster with a letter from a lawyer. There are also non-profits and lawyers who are willing to help, and the Department of Justice will investigate complaints.

Overall: ✔ The administration’s cavalier attitude toward funding for basic research is on display in the proposed cuts to discretionary spending. We fear that the social sciences will be among the hardest hit.

Making the case for social science funding will require continued public engagement. This sort of engagement–with both policy-makers and tax-payers–is already happening, but we can still do better. Concerns that advocacy reduces credibility even appear to be unwarranted.

We expected a Trump administration to leave current doctoral students in political science with fewer job opportunities, whether in policy or in academia.

Overall: ? The federal hiring freeze has reduced the availability of non-academic jobs. It is too early to see the effect on the academic market, but this will bear watching even if the hiring freeze is eventually lifted (given the reticence many academics would have to work for this administration).

Federal jobs aren’t the only way to be policy relevant. Increased political engagement has filled the coffers of some non-profits, which may leave them hiring. Also consider teching up with data science credentials to make yourself more marketable in multidisciplinary departments and sectors doing politically relevant research. Social scientists can bridge the gap with tech in order to answer politically relevant questions.

We noted in our December post that Trump would likely spur many academics toward greater public engagement and activism–we also suggested that Trump’s penchant for vindictiveness could extend to these increasingly vocal academic critics.

Don’t let disaster fatigue set in. If you feel so inclined, keep resisting, but stay up to date on new local, state, or federal legislation that could be used to target protesters.

Communicate important insights from your research to the public with op-eds, consider writing amicus briefs for lawsuits, contributing analysis through events like DataKind’s data hacks, or volunteering your analytical skills.

We expected new challenges to teaching in an increasingly divided America and asked several open questions to consider going forward. We don’t have all the answers, nor did this come with any predictions, but others have written extensively on the topic, and we would refer you to a few selections.

Given Trump’s xenophobic rhetoric and promises to restrict immigration, we expected international students to encounter an increasingly difficult and stressful legal environment.

Overall: ?  The extent of restrictions on international students is still unclear and may ultimately depend on individual circumstances (country of origin, residency status in the U.S., and so on). The trends so far, however, are extremely troubling.

We implore senior scholars and institutions to be understanding of the needs of international students and to do what they can to provide a safe environment. This includes providing summer funding so that those who are in-country can afford to stay over the summer, and flexibility with residency requirements and requirements to be present during exams and defenses for students who are stuck outside.

The NLRB ruled in 2016 that graduate students who work as research or teaching assistants at private universities can unionize. Once Trump fills two seats on the NLRB, the board will have a Republican majority that could roll back previous rulings on graduate student unionization. While we do not know of any immediate challenges to this ruling, we recommend caution–those who seek unionization should act quickly, before the ruling is challenged.

As we wrote in December, “Donald Trump’s actions to date give us ample reason to believe that the incoming administration will present doctoral students in political science with challenges that we would do well to start thinking about now. We hope we are wrong.” Unfortunately, we were not. For graduate students confronting these challenges, there may be a tension between asking questions that matter on an issue you find interesting and asking questions that you can answer given these new difficulties. We implore senior scholars to be understanding as we struggle with these issues. To our fellow graduate students, remember that our priority is to graduate. Be persistent and creative in how you tackle these difficult questions. And hope that you don’t end up winning Trump bingo any time soon.