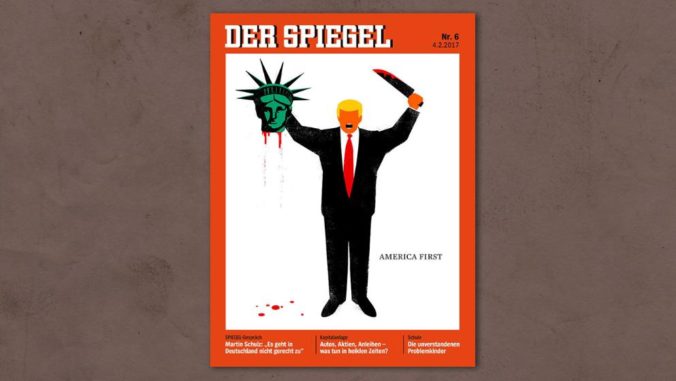 This World Politics in a Time of Populist Nationalism (WPTPN) guest post is written by Simon Frankel Pratt, a doctoral candidate at the University of Toronto. His research is on institutional politics, international norms, and the US’s security apparatus. For further information, see his website or find him on Twitter (@simon_the_pratt)

Unlike other contributions to this essay series, mine will be somewhat more informal in tone. I am going to share some concepts (and neologisms) that I find helpful for making sense of ‘Trumpism’—by which I mean Trump, his rogues’ gallery (or carnival), and the broader coalition of right-wing movements that support him. Specifically, I am going to try to sell you on the following points:

Before I go about explaining and defending these claims, let me begin by presenting the value-position and perspective I occupy, since this will provide context to what I’m saying, and maybe excuse any gross errors of mine in the process. I’m Canadian, a lifetime city-dweller, Jewish, gay, and my politics are leftism and liberalism coexisting in affectionate tension like the protagonists of a buddy-cop comedy. So I’m a stakeholder in whatever mischief or calamity Trump(ism) wreaks in the international order, and I fear the pogroms that would—and will—occur should that order collapse

Yes, you read all that right. It’s an aside, but dread and pragmatism are both built into my cultural memory in significant ways, at least since that one Passover when I was eight or nine and discovered Art Spiegelman’s Maus on Zaidi’s bookshelf. How many swastikas did German Jews see before the Shoah? And how many are we seeing now? So pardon my fears.

I imagine the claim that Trumpism is an insurgency is the one raising the most eyebrows right now. The word ‘insurgency’ usually brings to mind hordes of armed anti-regime fighters, acts of terrorism, fractured political communities, and the sort of broad, routinised political violence characteristic of a hot civil war. Granted, the US does feature a host of anti-regime militants, acts of terrorism, and very clearly is a polity divided, but it isn’t, you know, Algeria or Afghanistan.

Yet the idea of insurgency—of a cold civil war, in this case—is bigger than just the armed model, and describes any relationship between a regime and a set of challengers who seek to topple that regime by rising up against it.[2] From all I see and hear of Trump’s staunch supporters, this is a fair way of talking about them. They are not doing politics as usual. They are not playing within institutionalised rules. They do not see urban(e) liberals as fellow citizens (of the US or the ‘West’ more broadly) with whom they disagree, but as members of a completely different political community. Forgive the tired Schmittian language, but we’re on the other side of their friend-enemy distinction. And in their enmity, they seek to dominate us, marginalise us, and ultimately banish us from their world.

To be sure, this doesn’t describe all Trump voters or more cautious Trump supporters. Many of them act out of familiar, if parochial frustrations and petty prejudices, and are amenable to persuasion, to dialogue, to appeals from their fellow Americans, and ultimately to having their minds changed.

But there are many Trump supporters who are not interested in dialogue. They love their leader, rise up for him and with him, and aggressively mobilise for him—in some cases for the first time in their lives. They crave and celebrate POWER. Their movement isn’t that of the vote (although this is the mechanism of their institutional victories), but of transgressive contention—of insurrection against a governmental arrangement they see as thoroughly corrupt and repressive. Here we might reach for literature on radicalisation, to understand increasing commitment to a worldview and platform for action defined by pervasive, existential struggle and by moral binaries. But in short, I don’t think there is much to talk about with these people; there is only combat.

This brings me to the term potency performance. There’s a story about Mussolini I once heard, which I suspect is apocryphal but somehow still apt here. Il Duce is giving an interview on his movement. ‘What is the goal of your movement?’ ‘To attain power.’ ‘Yes, but to what end?’ ‘Power.’ I think most major Trumpist political acts are what happens once ultra-nationalist, hyper-aestheticised populist movements achieve their goal. A potency performance is a pageant of power rather than its employment as a means to ends. Pulling out of the TPP, banning citizens from a select range of countries, building a wall along the Mexican border, or, as now appears to be the case, boosting military spending by 10%—these will not make the US wealthier, safer, or even all that more free of Muslims or immigrants. They are not rational policymaking. But they do inflict misery on objects of scorn and sources of political challenge. They threaten hated foreigners and enrage hated liberals, establishing the Trump tribe as the one on top. Trumpist policies are the programmatic equivalent of : displays of masculine dominance by those whose small extremities have been mocked by the world for too long. Even tiny hands can yank around others, see?

Why do potency performances have such appeal? Why are all these US citizens mobilising for Trump instead of just grumbling about dark people, kikes, and faggots over the dinner table or at the pub? We know from scholarship on social movements that mobilisation begets itself—that successful mass action creates momentum, causing activist networks to snowball and turning protest neophytes into veterans. But why now? After all, we also know that the economic woes of Trump supporters are largely overstated. It can’t just be racism and bigotry, because these are long-standing features of life in the Trump Bastions.

I think it’s way-of-life anxiety… reaching the level of moral panic. For example, I don’t think upset over the decline of manufacturing is about the loss of jobs, but about the loss of ‘virtuous’ work, and of a family and town structure organised around this honest, productive, work-with-your-hands society.[3] I think this is their vision of the good, of the US that was and that should be. And us liberals, we took their jobs and gave them to foreigners and robots. We took their kids and made them gay or at least tolerant of this perversion. We let transvestites (or whatever) into their bathrooms, and made a black man Boss of the Country—is he mocking us with that big white-on-black smile?

This is just it: we liberal progressives have been winning. Our accomplishments have mounted and with every one of them, hard won but then dearly celebrated, we’ve pushed them back. Oh, if only we could deliver the coup de grace and finish the job! But like anyone with their back to the wall, they’re now fighting like tigers. They seem to be gaining back ground, too, which is a good inspiration for them to press the attack.

I have no advice for how we scholars should engage in activism. I’m not an experienced protestor or political organiser. But as a scholar, I can at least propose that right now, in this crisis, we suspend the search for policy relevance and instead seek polity relevance—to offer creative perspectives, critical analyses of dominant narratives (theirs and ours), and to orient our work and our voice around the needs of our (liberal) political community, and not just those of bureaucracy and statecraft. As if clergy, we should help our ‘flock’ articulate their values and aspirations, reflect on their trajectories, and recognise threats and allies, not just through facts but narration and critique as well. This is how we support mobilisation and defence of our embattled liberalism, which for all its warts is what keeps people like me from being killed twice over.

Oh yeah, also we should get our asses out of our chairs, our feet on the street, our voice on the phone to our representatives in government, and our arms linked with those of our friends. It’s time to fight.

[1] This being a concept from a 2015 blog post and which I have yet failed to publish anywhere peer reviewed, though it did at least get a nod from Patrick Thaddeus Jackson (2017).

[2] Mackinlay (2009) does a good job of showing how common understandings of insurgency largely describe Maoism and its descendants—conflating an historically particular set of strategies with insurgency in general. Yet as a number of social movement theorists have shown, insurgency can describe a broader mobilisation against the institutional order of things, where contentious or transgressive political action undermines one regime and installs a radically new one in its place (McAdam, Tarrow, Tilly 2001).

[3] Yes, that is the ghost of Heidegger laughing at us. Will we ever be free of Nazis?

Wanted: A New Executive Director for the Global Fund