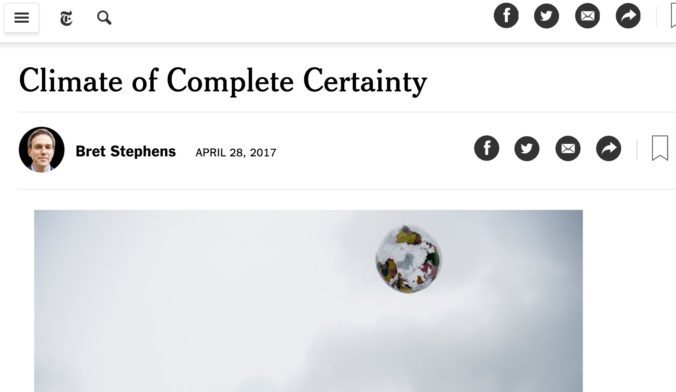 The former Wall Street Journal writer Bret Stephens has a column today to kick off his new digs at the New York Times that meanders into climate change territory and has raised some hackles. In the piece, he talks about how public opinion on climate change is soft, which some folks have complained doesn’t capture public opinion accurately. Both are true in my view and miss the point. As the Storify thread of tweets below talks about, Republican elites and the fossil fuel industry have poisoned the well so that many Republicans think climate change is a hoax. So, public opinion is soft. Stephens goes on to write about scientific uncertainty, but that’s really irrelevant to the issue at hand, which is the extreme politicization of this issue in a decade which has made bipartisan action on this topic unlikely for the foreseeable future. That leads me to conclude something intemperate in tweet 22!

Uniting for Peace in Syria: Radical Move or Modest Proposal?