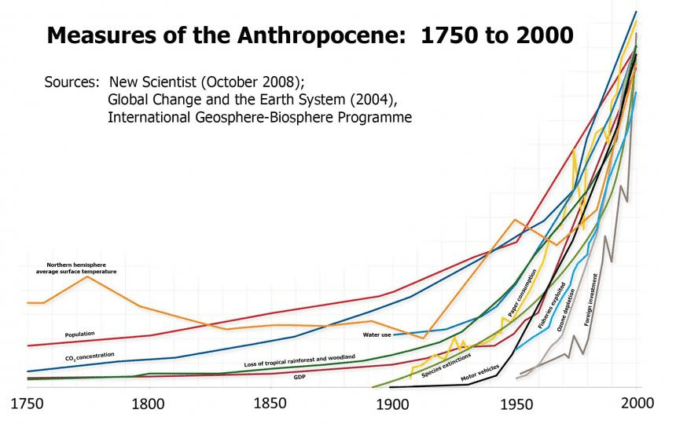 The state of the global environment is terrible—and deteriorating. The globalization of industrial production and the consumptive habits of 7 billion people have created the Anthropocene—a geologic age in which the actions of humans are the primary determinant of the Earth’s natural systems. This shift creates a profound new form of environmental interdependence, of which climate change is only the most salient example. Other “planetary boundaries” include biodiversity; the nitrogen cycle on which plant life and agriculture depend, fresh water; and the world’s oceans and forests. Human activity is putting all of these systems into a state of crisis. Each of them is essential for economic production and human welfare. One does not have to be a political scientist to infer that the implications for politics are profound, even catastrophic.

What do international relations scholars have to say about these looming political and economic crises? Not much.

In a new study (ungated access) published in PS: Political Science & Politics, we use the Teaching and Research in International Policy (TRIP) data to identify and understand what we describe as the “marginalization” of environmental politics in international relations. The results shocked us.

Though IR scholars in the United States see climate change, along with conflict in the Middle East, to be the greatest global threat in the years to come, just 7% of them describe their primary or even secondary research field as environmental politics. More damning, fewer than 2% of the articles published in the top disciplinary journals (defined by impact factor) are on environmental subjects.

The database included 5,306 articles from 1980-2012 in the top 12 IR journals, as defined by impact factor when the database was created. Table 1 shows the journals.

While many other issue areas (e.g. human rights, health) also receive scant attention compared to stalwarts like trade and security, there is no other area with such a large gap between what political scientists see as important and what they choose to study and publish.

In an era of rising populism, the realignment of parties, and the rebalancing of geopolitics, there is an urgent need for more IR scholarship on the environment.

Climate change is prompting states to reconsider their boundaries – and erasing others. Food security is dependent on our ability to create nitrogen. Water scarcity now afflicts countries in every region of the world; as this scarcity grows, so too will conflict around it.. Resource-related conflicts are likely to become more frequent and intense, and further exacerbated by environmental migration.

The lack of attention to environmental problems in our discipline is particularly unfortunate because political science has such effective concepts and theories for addressing these kinds of problems. Ideas about international regimes, epistemic communities, interest groups, two-level games, norm diffusion, among others can tell us an enormous amount about how to understand and address issues like water scarcity, fisheries management, or desertification. Environmental challenges cannot be solved without understanding how the interests around them are defined and contested. But, instead, the policy discourse in such areas tends to be dominated by the functionalist ideas of natural scientists and engineers, the efficiency considerations of economists, or the doctrinal insights of lawyers.

We can’t say definitively why political scientists aren’t studying the environment, but we suggest two ideas. First, we don’t teach graduate students about it. Jeff Colgan’s recent survey of field seminar syllabi at 42 leading universities found only 13 of 3343 articles analyzed were on the topic of the environment. Students are much less likely to go on to study something they haven’t been exposed to in their coursework. Second, there are more women studying GEP compared to other subfields, and women don’t publish in top journals as much as men. 34% of GEP scholars are women; in the rest of IR, the equivalent figure is 26% (p<0.1). Astonishingly, only 15.6% of first authors were women in this sample, and they comprise 19.5% of authors overall. Thus, it’s reasonable to infer that the well-documented gender gap in IR publishing helps explain the lack of attention to the environment.

Helping the Earth, and the discipline

If environmental issues would benefit from more study in political science, political science would also benefit from delving deeper into environmental issues. At the most basic level, the area presents a fertile terrain to test and develop basic theoretical insights in the field. While there is perhaps growing attention to climate change mitigation in the discipline, many environmental topics remain virtually untouched. To wit, fisheries provide a fifth of all the protein humans eat, but the FAO estimates all commercial fisheries could collapse by 2050. How many articles on fisheries governance do we find in the TRIP database over the past two decades? Two. Issues like water security, land use, biodiversity, or geoengineering are similarly ripe.

Put another way, if you were an IR PhD student hoping to get a job at some point during the 21st century, finding a critically important topic about which no one has written could be a very good way to position yourself.

Environmental politics has also proven to be a fertile realm for theoretical innovation. Some of the most interesting political science being done today on issues like complexity, transnational governance, and uncertainty is taking place in the environmental realm.

There is some evidence that political science is slowly becoming more aware of the environment. Prominent figures like Robert Keohane and Deborah Javeline have called for greater engagement with the topic. Looking at the TRIP data, there is a sharp bump in the number of environmental articles in the final two years (a quarter of all the environmental articles in the 22 year dataset occur in the last two years), 60% of them looking at climate change. Clearly, however, more needs to be done.

Disciplinary gate-keepers should take the environment seriously, and see it as an important growth opportunity for our field. Journal editors can look to include environmental content. Dissertation supervisors can make students aware of the possibility of forging new ground. Field seminar instructors can put it on the syllabus.

But it is also incumbent on scholars of environmental politics to push their ideas into the disciplinary mainstream. While environmental scholars may find subfield journals and seminars to be more comfortable outlets for their work (particularly given the marginalization we have identified here), they should also look further afield. If not, environmental politics risk developing monoculture tendencies that weaken its intellectual rigor, reinforcing its marginalization.