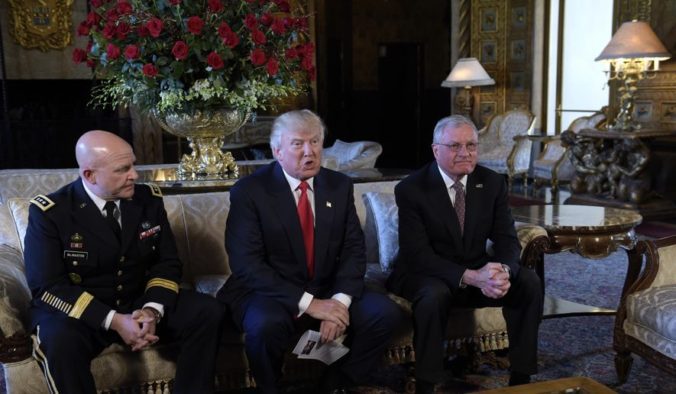 This is a guest post from Ronald R. Krebs, who is the Beverly and Richard Fink Professor in the Liberal Arts and Professor of Political Science at the University of Minnesota. His most recent book is Narrative and the Making of US National Security.

At times, in recent years, it has seemed that Republicans and Democrats occupied different narrative universes with respect to national security. Republicans generally continued to live in the world of the War on Terror. Democrats gave voice to a more balanced understanding of the threats and opportunities facing the United States. Even when concrete policy differences were muted, the narrative gaps seemed large and enduring.

Then, along came Donald Trump—imagining ISIS to be 500 feet tall, cozying up to Russia, casting doubt on America’s alliances, suggesting that nuclear proliferation might be a good thing, attacking free trade, and more generally undermining the postwar liberal order. Trump seemed determined to lay waste to the establishment. His efforts have so far borne little fruit. But they have done something valuable. They have reminded us how much Republican and Democratic foreign policy elites shared and still share. They have reminded us that—despite the constant battles and the Beltway blame game—there is still a bipartisan establishment whose vociferous and sometimes vituperative debates take place on a deeper, common narrative terrain.

The power of the president in foreign policy, Trump adviser Stephen Miller recently stated, is “very substantial” (though, contra the imperious Miller, it certainly shall be questioned). Trump’s advisers may hem him in at times, but, as Tom Wright points out, the president can pull the United States out of trade agreements more or less on his own, and it will be the president’s own inclinations that shape the US response in moments of crisis. Finally, the president seems intent on undermining bureaucratic opposition—and, if he gets his way on the budget, there won’t be much of a State Department or EPA left.

But, as I argue in my recent book, Narrative and the Making of US National Security, national leaders often aspire to effect deeper change in foreign policy by shaping the very premises that underpin debate. Beyond agenda-setting—that is, what issues rise to the top of the national agenda—presidents often hope to set the narrative foundation of policy debates and thereby to limit those debates’ scope and the range of legitimate policy stances.

Donald Trump, or at least Steve Bannon, clearly has such grand narrative ambitions. A key question—per Josh Busby’s recent Duck post—is whether Donald Trump is likely to succeed in effecting a narrative revolution, whether he can lay a new narrative basis for US national security debate. Busby worries that the Republican Party may come to be “steeped in Bannonite ideology.” “What starts with Iowa Congressman Steve King now may be a deeper bench in years to come…” Busby writes, “That’s what keeps me up at night.” There are many things that keep me up at night about the Trump administration in general and its foreign policy in particular. But this is not one of them.

First, the book’s core theoretical arguments do not suggest that the time is ripe for Trump to dominate the narrative stage. In Part I of Narrative, I argue that narrative dominance emerges from the potent combination of moment (unsettled times), institutionalized authority, and rhetorical mode (storytelling). President Trump, however, has not entered a narrative space that was utterly unsettled.

During the campaign, even among Republicans, he was alone in questioning the value of longstanding alliances, in charging that the rules of the global game were tilted against the United States, in proposing that core liberal values had no place in US foreign policy, and in suggesting that America was itself so deeply morally compromised that it could not criticize others’ performance on human rights. His occasional challenges to American exceptionalism were, well, exceptional. As Hal Brands has persuasively argued, Barack Obama’s foreign policy was a call for restraint and rebalancing from within the post-Cold War liberal internationalist consensus.

Democrats may have left aspects of the Terror narrative behind, while Republicans continued to hew to it, but the resulting narrative contestation and the policy disputes to which it gave rise took place on the deeper, common terrain of liberal internationalism and American exceptionalism. It is revealing that Trump’s own Cabinet secretaries charged with the foreign affairs and national security portfolio differed with him on nearly every issue throughout their nomination hearings and often since. For the most part, Secretary of Defense James Mattis, Secretary of Homeland Security John Kelly, and Secretary of State Rex Tillerson have so far seemed to be creatures of the establishment consensus, not renegades. As for Trump’s skepticism of free trade, which Democratic insurgent Bernie Sanders shared, this populist position has long been a theme on which those on either end of the political spectrum might come together. It has been well known that popular understandings of trade and its consequences depart dramatically from the elite-endorsed neoliberal orthodoxy, and Trump and Sanders productively plumbed that gap.

I would thus expect the public not to be especially receptive to an alternative stabilizing narrative, would forecast that Trump’s narrative efforts would be the subject of strong and dismissive resistance, and would not expect this alternative narrative to gain much traction. This is not the place to review rigorously a mere two and a half months of evidence (since the inauguration). But I see little evidence that Trump has much shifted these deeper debates, nor that an alternative vision of the world and America’s role in it has gained much traction. Just the opposite: as expected, there has been much pushback on foreign affairs—and not always just among Democrats.

Successful efforts to promote narrative also require a concerted presidential effort to offer a coherent story. I have not conducted a rigorous analysis of Donald Trump’s formal speeches or his thousands of tweets. But I think we can safely say that consistency and coherence are not Trump’s strength. Nor does he seem to be much of a story-teller in either format. There are story-telling elements, largely revolving around portraits of stock characters: the US as weak and a sucker, others as rapacious and opportunistic. But for the most part, it is my impression that Trump seems to tilt instead toward hortatory bluster—in contrast to either the instrumental, wonkish argument of Obama or the grand, moralizing story-telling of, say, Ronald Reagan.

In principle, Trump could change his rhetorical approach. Whether he is constitutionally capable is another matter. But even if he were, the structural impediments to narrative success remain imposing.

Second, as I recently argued in The National Interest, foreign policy leadership has become more challenging in recent decades. I understand such leadership to involve two central tasks: fixing the narrative and mobilizing and maintaining a supportive coalition. Three large-scale changes have made these tasks a lot more difficult.

In short, I’m not nearly as worried that Donald Trump, or even Steve Bannon, will be the author of the next great national security narrative.

But there’s still plenty keeping me up at night. Because none of this is an argument for complacency. Donald Trump can still do an awful lot of damage if he pursues just a fraction of what he promised or hinted at during the campaign and if he turns out to be as much of a reflexive pugilist and militarist as I fear.

True, these changes may not endure without narrative underpinnings, and the next president will be able to reverse many of Trump’s policies. But he or she will not be able to reverse the past. Others will have adapted—with glee or regret— over the next four (or, heaven forfend, eight) years. And the next president will confront a world made anew, in part, by Donald Trump. That should worry all of us.