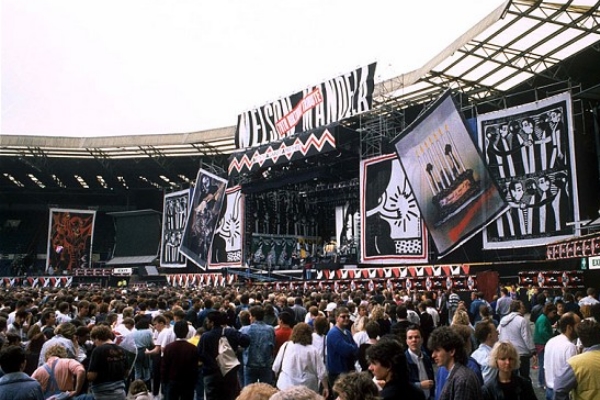 This is a guest post from Sean Kay, Robson Professor of Politics and Government, and Director of International Studies, at Ohio Wesleyan University. The interview quotes appear in his new book Rockin’ the Free World! How the Rock & Roll Revolution Changed America and the World (2017).

There is power in rock and roll – an art form that has modernized American values and helped them to ripple around the world – advancing freedom, equality, human rights, and peace. Over the last several years I was fortunate to interview about sixty major rock and roll artists, songwriters, producers, managers, non-profit heads and activists as part of a new book project. The interviews led me to the central case – that rock and roll advances progress in America and the world.

The Ethos of Rock & Roll

More than a music form – rock and roll is also an attitude and an ethic. As Joan Jett said in her 2015 induction into the Rock and Roll Hall of Fame:

I come from a place where rock and roll means something. It means more than music, more than fashion, more than a good pose. It’s a language of a subculture that’s made eternal teenagers of all who follow it. It’s a subculture of integrity, rebellion, frustration, alienation, and the glue that set several generations free from unnatural societal and self-suppression. Rock and roll is political. It is a meaningful way to express dissent, upset the status quo, stir up revolution, and fight for human rights. Think I’m making it sound more important and serious than it is? ‘It’s only rock and roll,’ right? Rock and roll is an idea, and an ideal. Sometimes, because we love the music and we make the music, we forget the political impact it has on people around the world. There are Pussy Riots wherever there is political agitation.

The modern world has been shaped by rockers – even if not being overtly “political.” According to Jann Wenner, founder and publisher of Rolling Stone magazine, rock and roll can be a shared expression of freedom, Wenner says: “Like Chuck Berry, just writing about how boring school was, ‘ring ring goes the bell’ – can’t wait to get out of there!” Billy Bragg, who was inspired to his career at a Rock Against Racism concert put on by the Clash, says: “You challenge your audience. Sometimes you are confirming the things that they support. I don’t like the phrase ‘preaching to the choir’ – but you are ‘recharging their batteries’ – by reminding them; they’re standing in the room and everybody in the room sees there’s power in union together.” George Clinton, of Parliament-Funkadelic tells me it was the kind of freedom you: “…could get at church, or any kind of ritual, but especially to do it on your own terms – not to get psyched into it, because you’re still opening yourself up.”

Rock and rollers have been important contributors to agenda-setting in areas like human rights with performances from George Harrison’s Concert for Bangladesh to Live Aid to the Beastie Boys championing Freedom in Tibet. Amnesty International has been in steady alliance with rock and roll. The organization’s Jack Healey teamed with legendary concert promoter (and Holocaust survivor) Bill Graham in the 1980s to coordinate concert tours including Bruce Springsteen, Sting, and U2 raising human rights awareness and dramatically increasing Amnesty International’s membership. Healey recalls:

“We did two days in Chile. We were live on television through Latin America – Mexico, Spain for 10 hours, two days in a row. We got 20 hours of live television where all those disappearances and torture were occurring. It’s no wonder they cleaned up. Seriously. It wasn’t just us. I’m just saying it affects the culture when you do things like that.”

The influence of rock and roll can be seen in amplifying the changes occurring at the end of the Cold War in Eastern Europe. In 1988 Bruce Springsteen and the E. Street Band performed in East Berlin. Tellingly, the 300,000 or so East Germans there to hear him can be seen on video singing along to Springsteen’s songs. Later, as the wall came down, Crosby, Stills and Nash were literally there, helping tear it down. David Crosby tells me: “That was a champion deal – ideas went over the wall. It wasn’t a squadron of tanks, it wasn’t artillery, it wasn’t any army that knocked that wall down. It was ideas going over the wall…and the people, on the other side, seeing how it was on this side. That information knocked that wall down. Information destroyed that wall. That was a triumph. We won that one.”

Of course rock and roll was not causal in terms of the Cold War’s end – but the stirrings of freedom were aided by artists. Indeed, in the 1970s the Plastic People of the Universe motivated Czechoslovakian dissidents like Vaclev Havel after the band was arrested. Later, in government, Havel held close counsel with Lou Reed. Thomas Shanker, who covered the collapse of the Soviet Union as a reporter rightly notes causality: “When the Soviet state collapsed, it collapsed because it collapsed. It was Gorbachev, it was the failed coup, it was the internal economic contradictions – economic failure that did it. But, all these other movements put in the minds of a broad section of the populace, ‘Is there another way? Can we do it differently?’” Similar questions were raised by Steven Van Zandt’s Artists United Against Apartheid regarding pressuring for sanctions compliance and advancing change in South Africa – and today, by groups like Pussy Riot as symbols of anti-despotism in Russia.

Rock and rollers offer an alternative narrative that can erode existing power structures. As Serj Tankian of System of a Down said to me: “Ultimately, you can call things as they are — be they realpolitik, realist, and whatnot, and in the end, depress everyone to death. But, without telling them, “Look, this is a choice” — that’s very important — giving them the optimism to make that choice and saying that, “…it doesn’t have to be this way: War is Over!” Rock and rollers thus also participate in and amplify social activism – some reaching millions of people.

The Grateful Dead, Santana, Michael Franti, Miley Cyrus and many more have created non-profits advancing issue areas from education to the environment. Non-profits like Little Kids Rock, Music Heals International, and Playing for Change work with artists to fill national and international public education gaps. Bonnie Raitt and her manager Kathy Kane helped to pioneer greening of concert touring – with the organization Reverb (co-founded by Guster member Adam Gardner) now servicing green tours for major acts. HeadCount registers voters at rock concerts. Its Executive Director Andy Bernstein says: “Nobody was doing an online auction for a meet-and-greet backstage at Woodstock. Now, they can rally over 200 artists on a single day to post photos holding signs saying “Register to Vote” with a link to HeadCount’s voter registration page.” In the 2008 election, Rock the Vote, another information campaign urging voter registration, registered 2.6 million young voters – a demographic critical to Barack Obama’s election.

Shut Up and Sing?

Artists are often told to “shut up and sing” – as if their rights to speak end because of their job. In fact, artists are often the town crier, articulating things society might rather avoid. Serj Tankian and his band System of a Down were educating the public about the failed war on drugs and mass incarceration in their 2001 recording “Prison Song” long before the national media reported on it. Tankian is also a major advocate for recognition of the Armenian genocide, a policy that Congress should now consider advancing given authoritarian trends in Turkey. Sinéad O’Connor, while controversial, was decades ahead of the public in articulating her protest over the abuse of children in the Catholic Church during her 1992 appearance on Saturday Night Live.

Of course much of the anti-war sentiment was accompanied by rock and roll during the Vietnam War. Joe McDonald, of Country Joe and the Fish, says that Woodstock was key in terms of mass communication and messaging, reflecting on his song “I-Feel-Like-I’m-Fixin’-to-Die-Rag”: “By using Woodstock, I’m saying that it mainstreamed. It mainstreamed then and reached out to the whole middle class world, because of the movie and because of the music. And in a way that was remarkable, really in a global way because it was accessible and it validated something in the audience.”

The results, however, are not always positive. Natalie Maines of the Dixie Chicks received death threats for criticizing the Iraq invasion in 2003. Crosby, Stills, Nash and Young had about a third of their audience walk out when they played anti-war songs in Atlanta during the peak of the Iraq conflict, 2006. Now, Graham Nash reflects: “What I’d like to do is talk to those people that walked out – and say, ‘O.K., in hindsight would you still have walked out? In hindsight – when you know what George Bush and his cronies did – would you still walk out?”

There are limits on the relationship between popular culture and progress. After all, Donald Trump asserted during the 2016 presidential campaign that he did not need celebrities – as Hillary Clinton did with Beyoncé and Bruce Springsteen – to generate enthusiasm. Rock and roll did not stop war, or end income inequality. But, the artists and activists that have engaged have something to say, and we are wise to listen. And, rock and rollers also can give voice to those who challenge authority backed with truth. As Serj Tankian says: “For artists, we have that moment where we have to be truthful. There’s no escaping it. Politicians don’t. They should, but they don’t.”

Political scientists are well-served to consider the impact of rock and roll in their wide range of research and studies about America and its place in the world. As we are now in an era where truth has become a commodity, political science provides evidence and reflection on the things that have genuinely made America great – and rock and roll is one of them. As scholars, we have much to gain from embracing the ethos of rock and roll.

Being willing to take creative risks in our work, standing up for principles of freedom, engaging in more field work to understand precisely how culture shapes and motivates social trends are just a few ways we might embrace the rock and roll ethos. By valuing inclusion and appreciating our intellectual diversity as a strength and by reflecting on the music that has given us personal empowerment, we too might renew the ideals that got us into the profession in the first place.

As Graham Nash reflects: “I have children. I have grandchildren. I’ve got to think that I can help make the world a better place for myself and my family and my friends. Everything starts inside, doesn’t it? How far can the ripples go once you throw that stone into the pool?”

Writing Women Back In