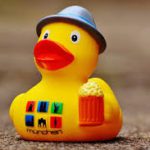 Financial markets continue to take the Trump presidency in stride, but the last six months have been tough. Political scientists worry that the Trump presidency is undermining our country’s democratic norms and processes.  It’s sometimes hard to know who, if anyone, is in charge, especially over at the State Department. Or at the Justice Department. News moves pretty fast. If you don’t stop and look around once in a while, you could miss it (is this guide outdated yet?).  Or you could forget to disclose a few dozen assets.

But there are some bright spots, for some industries: the decline in global alcohol consumption is likely to reverse itself. Meanwhile, the Trump administration continues its efforts to increase the prices of imported booze (and every other imported product) and encourage the consumption of “Made in America” alcohol (Hawaiian rum, California wine).

So, while we had hoped that our original guide would offer enough options to get us through the Trump presidency, it seems there’s more work to be done. In that spirit, some additional ideas. These could be particularly useful for the near-nightly 9pm breaking news story. Or for weathering the 4am Trump tweetstorm. Or anytime, really.

The Spicey Fired: Absolute Peppar and Tonic, garnished with a twisted orange. Or perhaps your taste runs more toward Spicey in a Bush – Bushmills and Ghost Pepper, garnished with a rosemary sprig. Looking for a third way to remember Spicey, while also trying to cure your hangover? There’s always the Hair of the Dog.

When violations of the emoluments clause get you down, reach for The Grift: two parts (Russian) vodka, one part Curacao (for a special Caribbean tax haven flavor), and one part grapefruit juice (picked from the orchard at Mar-a-Lago, by foreign workers hired under H-2B).

The Time Traveler: when an old tweet from a Trump administration official contradicts whatever the Administration says/does/wants to do. Or celebrate The “transparency” of Anthony Scaramucci’s management of old tweets with The Mooch — a Long Island iced tea, with a bit of Goldschläger thrown in to class it up.

The Stonewall: make it with Canadian whiskey. Embrace the fact that the Mexicans aren’t going to pay for that wall.

On edge about yet another vote on health care? A motion to proceed ruining your afternoon? Reach for McConnell’s Throat Pouch Rum Punch. Nobody has seen the recipe, but we’re pretty sure that it takes away insurance from 23 million Americans, give or take.  If you’re among the unlucky millions who stands to lose coverage, there’s always the Corpse Reviver.

Whisk(EU) Sour: For when distillers in Kentucky get hit with retaliatory tariffs. Or maybe you’re going to cancel those major trade agreements anyway. If so, down a TPP – tonic, pisco and pear liqueur (all domestically-sourced, of course).

When you question Trump’s tendency to cozy up with Middle Eastern autocrats, reach for The Orb: any liquor you want (provided you’re a member of the ruling elite), served in an ice sphere.

North Korean missile test and nobody seems to be in charge at the State Department? Might be time for an Atomic Cocktail. Or maybe it’s time for something new: mix a Rexit with one part Stolichnaya, two parts motor oil and…(oh, wait, the recipe seems to be absent, yet again).

Concerned that the objective assessment of your legislation doesn’t look so nice? Hire a partisan think tank and reach for a CBO – Cointreau, Bourbon and Orange. Similar to a Sidecar — easily dragged along.

To honor Akie Abe, the first lady of Japan, pour a Yamakazi single malt, neat. And if you’re ordering this at the bar, remember that you don’t speak a word of English.

A Shirley Temple is the perfect drink when you’re signing lots of legislation, with big ceremonies…but the bills don’t do much.

When Trump turns an appearance at the Boy Scout’s national gathering into a rambling partisan rant, grab Royal Jamboree Punch – gin, strawberry jam, lemon juice, Dubonnet, red grape juice and lemonade. And, as a drink created to celebrate Queen Elizabeth’s 60 years on the throne, this one also works well when worrying about Brexit (or celebrating the “Dancing Queen.”)

Worried that Jeff Sessions won’t be Attorney General at day’s end? Or that he’s your ticket to jail? Or that he’ll seize your property even before you’ve been convicted? Have an Alabama Slammer.

And if all of this is too much effort, it could just be Mueller time.

Two legs or One. It has nothing to do with planets- just pants.