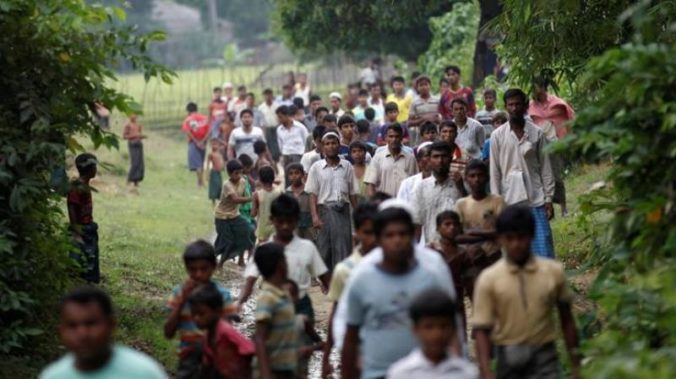 Myanmar: The Responsibility to Protect is Working Exactly As It Was Supposed To

This is a guest post from Aidan Hehir, a Reader in International Relations at the University of Westminster. He has published widely in a number of academic journals including International Security, The Journal of Peace Research, Ethics and International Affairs, and Cooperation and Conflict. He is author/editor of a number of books including, Protecting Human Rights in the 21st Century (Routledge, 2017); Libya, The Responsibility to Protect, and the Future of Humanitarian Intervention (Palgrave Macmillan, 2013); The Responsibility to Protect: Rhetoric, Reality and the Future of Humanitarian Intervention (Palgrave Macmillan, 2012).

In recent weeks, the desperate plight of the Rohingya fleeing from the Rakhine province into Bangladesh, has received sustained international media coverage. Many reports from inside Myanmar have attested to the brutality of the national military and their commission of egregious atrocities; indeed the UN Secretary General recently declared that “ethnic cleansing” was underway.

These scenes have, naturally, led to expressions of outrage and revulsion. In particular, some have claimed that the situation, and particularly the paltry international response, constitutes a violation of the Responsibility to Protect (R2P) as agreed by states at the 2005 World Summit. In fact, the situation is a textbook case of R2P working exactly as it was supposed to; it is not that states or the UN Security Council have failed to apply R2P, it is simply that once again R2P has proved to be a failure.

It is worth remembering that the crisis in Myanmar did not erupt recently; it dates back to (at least) the 1982 “Burma Citizenship Law” which failed to recognise the Rohingya as a distinct ethnic group thereby leading to tensions. Since 2012 clashes between Myanmar security forces and the Rohingya – including the insurgent group Harakatul Yakeen now known as Arakan Rohingya Salvation Army –have intensified, and at various stages boiled over into large-scale violence against civilians. There has been, therefore, ample opportunities to date to engage with the situation and implement a spectrum of measures – less coercive than military intervention – to halt or ideally prevent atrocity crimes. Yet, remarkably, the Security Council has not passed a Resolution on Myanmar since 1948, and the last time it issued a Presidential statement on the country was in 2008 in relation to forthcoming elections; their disinterest is clear. On the 13th of September the Security Council (finally) issued a one page press-release condemning the violence, but beyond commending the efforts of others to deal with the refugees and ‘encourage calm’ it was vacuous and certainly unlikely to change the dynamics on the ground.

Given this history and the present stasis in the face of the unfolding catastrophe, it is difficult not to conclude that the Rohingya are simply not important enough for the permanent five members of the Security Council (P5); Russia and particularly China have interests in the country and are certainly disinclined to take action against Myanmar’s government, while the governments in France, the US and the UK know that the welfare of the Rohingya is not galvanising their respective electorates to the extent that they need to take any meaningful action. As Phil Orchard noted in his recent Duck of Minerva post, the scale of the crisis – though objectively profound – is still not sufficient to impel the P5 to act, due to their evident lack of political will; the existence of R2P has not altered this. In fact, R2P was consciously designed to accommodate the political interests of the P5 and facilitate inaction.

R2P emerged as a result of the widespread disaffection with the international community’s – and specifically the UN’s – inconsistent response to intra-state crises in the 1990s. The International Commission on Intervention and State Sovereignty was thus established with the aim of, in its own words, ‘crafting responses that are consistent’. Despite this goal, the Commission’s report – The Responsibility to Protect – did not call for any legal reform or new processes that might have changed how the UN responds to crises. Instead, the recommendations focused on generating collective support for principles, and cultivating a new, more human-security-orientated, disposition amongst states, particularly the P5. In other words, from its inception, R2P has been singularly premised on changing the political will of states, by encouraging good practice and by ‘shaming’ aggressors.

Thus, though many heralded R2P’s recognition at the 2005 World Summit as a breakthrough, in fact it changed nothing. While the 2005 World Summit Outcome Document undeniably gave R2P an official status, the two paragraphs recognising R2P were essentially devoid of content and little more than a new way of describing pre-existing norms and laws. Indeed, of particular importance was the wording regarding the international response; Paragraph 139 notes that if a state fails to meet its responsibility to protect its own people, the international community can take action but crucially adds the qualifier ‘…through the Security Council, in accordance with the Charter, including Chapter VII, on a case-by-case basis’. This explicitly states first, that external action is permissible only if it is sanctioned by the Security Council and second, that while the Security Council has the right to take action it does not have any obligation to do; rather it need only act “on a case-by-case basis”.

One need not have a fastidious legal mind to see that the R2P recognised in 2005 was consciously designed to enable the Security Council to choose when, where and how to act, if indeed at all. Likewise, one need not be a doctrinal realist to understand that the P5 will only sanction action if it is in their respective interests to do so. While R2P’s “norm entrepreneurs” – to use the academic parlance – may have sought to impel consistency through force of argument, during the 2005 negotiations, states – particularly the P5 – shaped R2P’s contours to suit their own preference for operating under a discretionary entitlement to act rather than anything approximating an obligation. Thus, the permissibility of inaction was built into R2P from its inception.

As a result, since 2005 we have witnessed precisely the same inconsistent response on the part of the international community to intra-state atrocity crimes as occurred before R2P. Since 2005, atrocity crimes have been perpetrated – without meaningful or effective external censure – in a number of situations including Sudan, Sri Lanka, Burundi, Yemen, and of course Syria. Indeed, since R2P was recognised, atrocity crimes have actually increased, and there has also been a steady degeneration in global respect for human rights.

The response to Myanmar, therefore, should occasion little surprise as it is just the latest example of the fundamental flaw at the heart of R2P; in situations where atrocity crimes are ongoing, R2P is utterly dependent on the political will of P5. When they are divided we have situations like Syria; when one or more of the P5 support the state committing the atrocities we have situations like Darfur and Yemen; and when none of the P5 are especially interested in particular crisis, either because it is occurring in a strategically irrelevant place or the victims are simply not deemed to be important, we have situations like Burundi and Myanmar.

Myanmar shows again, therefore, that while it would be an exaggeration to say that R2P is “dead”, it is certainly impotent. It survives only insofar as it has become a term that many states, and some international organisations, are willing to occasionally use. R2P’s supporters regularly claim it that it is making ‘tremendous progress’ because it is being increasingly invoked in Security Council Resolutions, and more recently that it was (finally) formally put on the General Assembly’s annual agenda. But these are quite simply superficial achievements; they do not alter the fact that when crises like that in Myanmar erupt, the international community’s response will be determined by interest-based considerations rather than hortatory slogans. Given how often this has happened before, we can hardly be surprised at this latest triumph of realpolitik over human rights in Myanmar.

The Book Nook: The CIA and the Politics of US Intelligence Reform