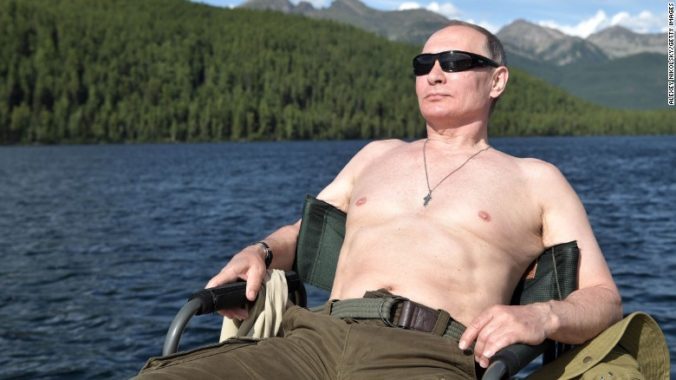 I am (sort of) on vacation and visiting the Motherland. In the meantime, I allowed myself a couple of days of couch potato mode that included some Russian TV. A political scientist in me is never on holiday so while flipping through some mainstream channels I made a little Russian TV digest for the Duck. I am not repeating Gary Steyngart’s experiment of watching Russian TV for a week at the Four Seasons, mostly because early career researchers don’t have money for 5* hotels and my mum cooks better than Michelin restaurants. Let’s skip the morning shows that, fortunately, don’t include the benefits of urine therapy anymore and just try to persuade Russian women to wear high heels otherwise they won’t find a man and will never be happy.

Moving on to news segments on Channels One and Two. It was a Morgan Freeman and UN General Assembly Day. Most channels competed in their singers on ‘what the hell an actor does investigating Russian election interference’, showing Morgan Freeman in front of the destroyed Capitol Hill building and recommending him to stick to playing presidents on the big screen. To be honest, Russian TV, I am with you on that one. Committee to investigate Russia made quite a splash with Morgan Freeman’s video plea, but Rob Reiner? Charlie Sykes? Do any of them even speak Russian? They should definitely hire a “Russian expert” who testified for the U.S. Helsinki Commission  and  called all Western journalists working in Moscow Putin’s stooges  Molly McKew. Want to know if she speaks Russian? Take a guess.

Even though #45 is still better than “Killary”, Russian TV newscasters couldn’t resist poking fun at Donny’s missteps, the “Rocket Man”, the forgotten handshake, all was meticulously noted and sniggered at. Only Ukraine’s President Poroshenko was awarded the same amount of ridicule for his speech at the Security Council. He was recommended to stick with Morgan Freeman and do theatre performances. The reason for that remark was Ukraine’s president showing more Russian passports as evidence of Russian military presence in the East of Ukraine.

NTV, previously a very oppositional news network before it was disbanded and raided in 2000, entertained me with some live talk show about current events. The lineup included several journalists and “fakesperts” such as Greg Vainer, who defrauded several people in the US (mostly from the Russian-speaking community), escaped to Russia and now poses as an American journalist. In the discussion of the Korean nuclear threat, there was a lone Ukrainian political scientist who argued that Ukraine gave up its nuclear weapons for no reason because Russia’s promise to keep Ukraine’s territorial integrity in exchange for them  was bullshit [Budapest Memorandum]. One of the newscasters ordered him ‘get the hell out of the studio’ (if Russians are angry, they will send you ‘to a penis’). The Ukrainian journalist obliged, holding a middle finger as he was walking out.

In other news, B&N bank bankruptcy is not a problem, Putin opens sports centres for orphan kids and meets the new cohort of governors elected last Sunday. 15 out of 17 were temporarily appointed by the Russian president before the populace agreed with the glorious leader. Medvedev is still in the picture looking stern and chastising president of the diamond mining company ‘Alrosa’ Ivanov where 8 people died in a mine. I am afraid I napped though a couple of cop shows and a lie-detector drama and woke up for an ad for a movie “Crimea” that promises ‘the story of love, faith and honor, strength of spirit and true friendship against the backdrop of the real events of the Crimean spring of 2014’. Local news advertised a massive agricultural fair in my home town that I will have to visit to eat some tasty Kuban products. I meant, to do some research on patriotic consumption.

That’s all for now, I will get back to devouring dill and hope I won’t come back to the office loving Putin too much.

Myanmar: The Responsibility to Protect is Working Exactly As It Was Supposed To