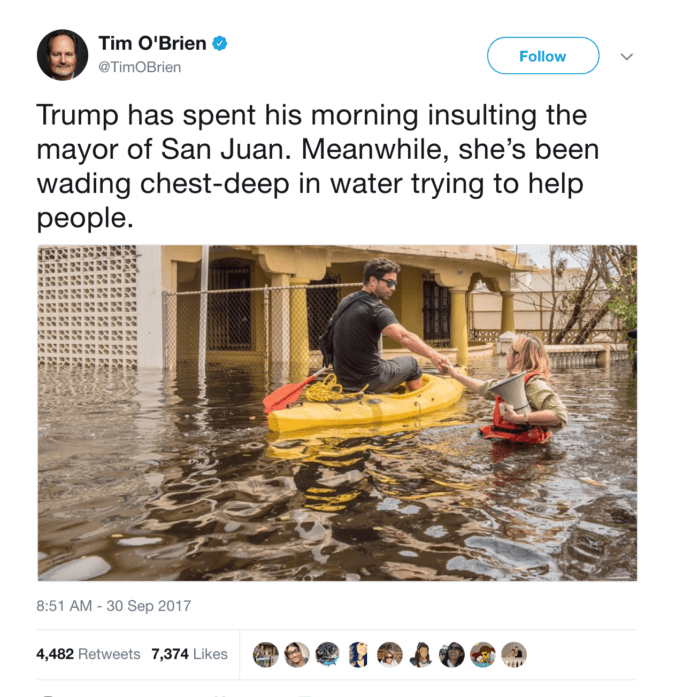 Puerto Rico: What did the delay in the response to Hurricane Maria mean?

Last night, I tried to dig in and understand whether and how the response to Hurricane Maria was delayed. I wrote a Tweetstorm that I Storify-ed below. I wanted to see what evidence if any supported those claims and in what ways a swifter and larger response potentially could have addressed some of the specific problems that buffeted and continue to confront Puerto Rico.

In the last 24 hours, we’ve seen news reports from the Washington Post that criticized the president’s desultory response along with a plea for help from the Mayor of San Juan. President Trump, of course, responded in kind by attacking FakeNews and the Mayor of San Juan (because he’s an asshole). Leaving aside the president’s crass punching down, I think it’s a fair question to try to nail down what could and should have been done sooner. Former Obama disaster official Jeremy Konyndyk wrote a similar tweet thread as well.

Giving the administration the benefit of the doubt, it is true that coordinating logistics for Puerto Rico are harder than for the mainland for hurricanes Harvey and Irma given the distance. It’s also true that Puerto Rico occurred in the wake of those two storms in which FEMA resources were already stretched. It is also true that the extent of the devastation made distribution of aid on the island a real problem since many roads were impassable.

That said, Maria wasn’t a surprise. People knew well in advance that Puerto Rico was going to be hit by Maria and so decisions in the first days in terms of mobilizing ships, including the hospital ship Comfort and other naval assets that could have ferried troops and helicopters, were delayed by days. I think all of that has been consequential for speed of the response, especially compared to the mobilization after Harvey, Irma, Katrina, and the Haitian earthquake. Read on for more detail.