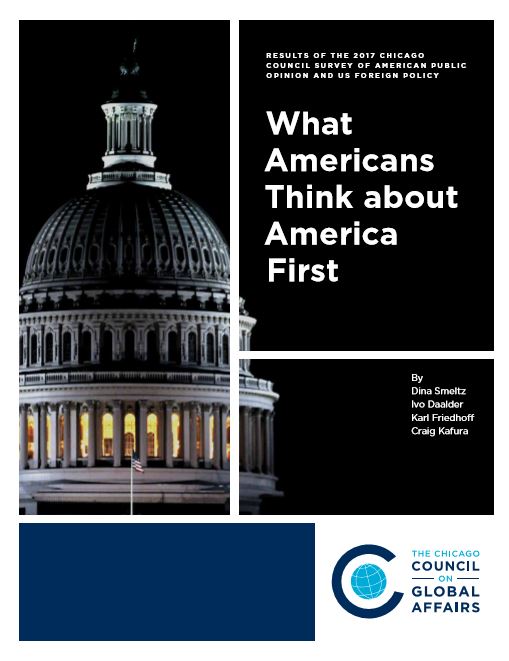 “Not much” and “less and less” is What Americans Think About America First, as documented in the latest Chicago Council on Global Affairs public opinion report.[†]  That’s somewhat reassuring. But only somewhat.

On one America First issue after another, the data show limited and declining support. On the general issue of maintaining alliances, 49% support compared to 38% who oppose. On NATO, 69% see it as essential to American security and 53% say it benefits the United States as well as the allies, while only 27% see it as mostly benefiting the allies. 59% agree there should be more burden sharing, but only 38% say the U.S. should make our security commitment contingent on that.

The 63% choosing an “active part in world affairs” instead of “stay out” as a measure of internationalism over isolationism varies strikingly little from the historical pattern in Chicago Council polls going back to 1974. Also encouraging is the 61% who say the US should play a shared leadership role compared to only 32% who opt for being the dominant world leader.

The intra-Republican splits are especially striking. On one issue after another Trump supporters diverge from traditional Republican internationalism. On conditioning the US commitment to NATO on greater burden sharing, Trump supporters agree 61% compared to non-Trump Republicans at 40%. The split continues on issues such as whether NAFTA is good for the US economy (20% to 49%); whether illegal immigrants should be required to leave the United States (46% to 25%); and whether the US should remain party to the Paris Climate Change Accord (23% to 53%).

So there is a lot to be encouraged about here.[‡] Just as with Obamacare and the reality of losing the benefits of the Affordable Care Act set off a pro-backlash against the original anti-backlash, moving past slogans and slurs to foreign policy and national security realities has caused the public to show that it is, yes, pretty prudent.  And putting my partisan hat on, Republican internecine warfare does have its benefits for my side in the next rounds of political competition.

One “but” concerns salience. It’s great that more people see the flaws and dangers in America First than buy into it, but America Firsters have been feeling their support more intensely than opponents have been feeling their opposition. America First-ism was much more of a motivation for Trump voters in the 2016 election than liberal internationalism was for Hillary Clinton voters. To the extent that Trump has backed off some campaign positions, it’s hasn’t been because of political pressure to move towards the policy mainstream. True, there’s been some policy reality rub-in. But only some. And if he reverts to full-bore America First-ism, I wish I were more convinced that opponents would muster greater intensity than his core supporters. The recent article by UC Santa Barbara Professor Hahrie Han on how and why gun advocates have so much greater intensity and solidarity than gun controllers has points that carry over to the domestic politics of foreign policy. Some Trump actions might well shift the balance of intensity—but the ones that come to mind are so dangerous as to be causes for huge concern.

The other major “but” is the weaknesses, both policy and political, in the proposed alternatives to America First. Trump is actually correct that the post-World War II/Cold War model – which, whatever their other differences, American hegemony, liberal internationalism, and neo-conservatism all continue to embrace – no longer fits the twenty-first century world. But just as with Francis Fukuyama’s argument that democracy and capitalism had emerged from centuries of contestation as the optimal political and economic systems to be refined but not fundamentally changed going forward, the post-World War II model as the culmination for global peace and prosperity applicable on an ongoing basis has a flawed end-of-history element to it. More on that here and here, and in the works. There is much to be done to come up with a sense of America’s role in the world that is both substantively sound and can resonate with the American public.

So, yes, it’s good to see that the American public is not buying into Trumpian America First. That’s surely better than the alternative. But there is still much unsettled about the politics and strategy of our foreign policy.

[*] Bruce Jentleson is Professor of Public Policy and Political Science at Duke University. He currently is a Global Fellow of the Woodrow Wilson International Center for Scholars (where he was a Distinguished Scholar in 2014) and a Non-Resident Senior Fellow, Chicago Council on Global Affairs. In 2015-16 he was the Henry A. Kissinger Chair in Foreign Policy and International Relations at the John W. Kluge Center, Library of Congress. His forthcoming book is The Peacemakers: Leadership Lessons from Twentieth-Century Statesmanship (W.W. Norton, 2018). His policy and political positions include Senior Advisor to the U.S. State Department Policy Planning Director (2009-11), a senior foreign policy advisor to Vice President Al Gore’s presidential campaign (1999-2000), and State Department Policy Planning Staff (1993-94). He is a Co-Director of the Bridging the Gap project promoting greater policy relevance among academics. He currently serves on the Board of Trustees of the Carnegie Council on Ethics and International Affairs (Vice-Chair, Executive Committee). His Ph.D. is from Cornell University.

[†] Transparency: I serve as a Chicago Council Nonresident Senior Fellow and on the Foreign Policy Advisory Board. The views herein are my own.

[‡] As an aside, in the question about confidence “in the ability of leaders in each of these institutions to shape policies that benefit the United States,” while academia placed behind the military, intelligence agencies and the State Department, we beat think tanks, large corporations, the media and Congress, and tied with the White House!