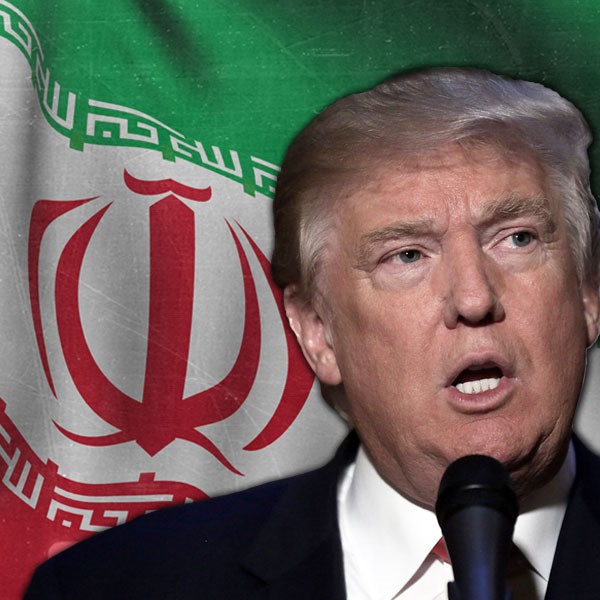 Mr. Trump, Choose Your Own Adventure

This post comes to us from Rupal N. Mehta, Assistant Professor at the University of Nebraska-Lincoln and an alumna of Bridging the Gap’s New Era Workshop and International Policy Summer Institute (Twitter @Rupal_N_Mehta); and Rachel Elizabeth Whitlark, Assistant Professor in the Sam Nunn School of International Affairs at the Georgia Institute of Technology and a Bridging the Gap associate and alumna of the New Era Workshop (Twitter @RachelWhitlark).

In the coming days, President Trump is tasked with recertifying the Iran nuclear deal, the Joint Comprehensive Plan of Action (JCPOA). The Obama Administration brokered this landmark agreement between Iran and core members of the international community (the P-5 plus Germany) to limit Iran’s nuclear program. The 2015 Iran Nuclear Agreement Review Act mandates the U.S. president with recertifying Iranian compliance with the JPCOA every 90 days.

This week marks the two-year anniversary of implementation day, and it is not at all clear what course of action Trump is going to take. In the past few weeks alone, we’ve heard rumors from in and around the administration about what action is forthcoming, including an eerie warning about “the calm before the storm.” Domestic and international sources have said that Iran is complying with the terms of the nuclear agreement and that the JCPOA should therefore be recertified. Conversely, foreign policy hawks and the President himself have argued for its unilateral rejection for reasons largely outside the scope of the JCPOA.

In what follows, we envision two possible worlds emerging from Trump’s decision point. In the first, Trump recertifies the JCPOA and the U.S. continues to uphold its end of the bargain. In the second, Trump decertifies and Congress re-imposes sanctions on Iran and effectively withdraws U.S. participation, thereby abrogating the deal. It’s worth thinking through the consequences of each of these worlds for international security, even as we will soon know which is most likely to transpire.

Imagine a world in which President Trump recertifies the deal. At the time of the deal’s negotiation, and more recently, the JCPOA has been praised for its strength as a non-proliferation tool. The nuclear arrangement severely curtails Iran’s nuclear weapons development for the next 10–15 years and increases its ‘time to breakout’ – the amount of time Iran would need to acquire nuclear weapons if they choose to do so. The deal permits Iranian retention of a latent capability (possession and operation of enrichment or reprocessing facilities necessary for nuclear weapons) for the next decade and a half, with strict monitoring and enforcement of its nuclear infrastructure. And it essentially punts the nuclear issue to the next administration whose motivations for handling the Iranian nuclear question would likely be more strategic and less personal.

What does this world actually look like? Despite the critics’ concerns, Iran’s compliance with the agreement and it’s current latent status may actually cause it more harm than good. Our research on the effects of nuclear latency suggests that states that acquire a latent nuclear capability face more international reprobation through sanctions and threats of military force without producing any deterrence benefits. On average, we find that latency does little to deter military aggression or assist in settling disputes. Indeed, this was Iran’s experience after 2002 when its latent status was uncovered – it suffered from an extensive international sanctions campaign and faced critical disputes with key members of the international community. 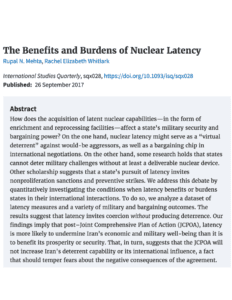 Regionally, the continuation of the agreement should prolong the status quo. While most proponents of the deal agree that it’s not perfect and does little to address Iran’s behavior in the region as a state sponsor of terrorism and promoter of instability in Yemen, Bahrain, Syria and Iraq, it may still be the least bad option – often the mark of success in foreign policy. Living out the life of the deal would prevent Iran from acquiring an operational nuclear weapon for the foreseeable future and, by extension, reduce the nuclear threat, especially to Israel, Saudi Arabia, or other regional actors that Iran might target with a nuclear arsenal. Further, by stressing the resolve and efficacy of the international community in countering the spread of nuclear weapons, regional neighbors may be less inclined to try their hand at nuclear proliferation. Without the promise of virtual deterrence (and the concomitant burdens of latency) and no Iranian bomb against which to balance, the prospect of regional proliferation may actually decline.

Lastly, choosing to recertify the Iran deal may improve the U.S.’s standing in the international community on a variety of fronts. First, by not reneging on an agreement that includes key allies in the European Union (who carried the burden of the previous round of economic sanctions), the Trump Administration may be able to repair some of the damage to its transatlantic partnerships and restore some goodwill among EU members. Further, by upholding its commitments to Iran, the Trump Administration can signal its credibility and reliability as a negotiating partner – something that the North Koreans may use as a rationale for agreeing to negotiations of their own nuclear weapons program. Lastly, maintaining the deal would help to reestablish the U.S. as the leader of the nonproliferation regime. Agreements like the JCPOA are useful in signaling to potential proliferators that the U.S. and the P-5 remain committed to stopping the spread of nuclear weapons.

Very soon, unfortunately, this may not be the world we’ll find ourselves in.

The world in which President Trump does not recertify the JCPOA looks vastly different. According to recent reports from officials aware of the President’s thinking, Trump may opt to not re-certify the deal in opposition to recommendations from his own national security team including Secretary of Defense James Mattis, Secretary of State Rex Tillerson, and Chairman of the Joint Chiefs of Staff, General Joseph H. Dunford, Jr. This would pass the issue to Congress, which would then have 60 days to consider their next steps – including reissuing economic sanctions and even contemplating preventive military force against Iran.

This path would make real the foreboding warning Senator Tom Cotton issued prior to the signing of the deal and even more recently. It would signal that the Trump Administration and members of the Republican Party are first and foremost interested not in stopping Iran’s nuclear weapons progress but in regime change – a goal that previous administrations have actively disavowed. It would be in this charged context that the Trump Administration would attempt to negotiate a – most likely mythical – deal that better serves the U.S. national interest. There is no ongoing discussion of what this deal would entail or how a new deal aimed at regime change in a potentially nuclear Iran could improve U.S. national security. The international community would remain in a holding pattern to see what Congress does next.

In the interim, the future looks daunting. If the deal lapses, Iran will likely restart its nuclear weapons program, shrink its breakout time, and seek a weapons deterrent that could stave off an Israeli counter-proliferation strike or U.S. military action aimed at regime change. The Iranians may also decide to dramatically ramp up their conventional capability, including their production of ballistic missiles.

This will have significant repercussions for the region. In what is already a tense neighborhood, interstate relations between Iran and its regional adversaries like Saudi Arabia and Turkey could get even worse. Facing the prospect of a nuclear-armed Iran could ignite nuclear interest in these American allies. And countering reactive proliferation programs in Saudi Arabia and Turkey – two strategic partners the U.S. needs to combat terrorism and project power in the region – could prove quite costly.

A world in which the Trump Administration fails to follow through on its commitment to the JCPOA could be disastrous for the U.S.’s reputation and standing globally. Already weak transatlantic partnerships could rupture as the Europeans remain firmly committed to the deal, even with a U.S. withdrawal. There is little to suggest that China and Russia would be interested in renegotiating a deal, meaning that whatever leverage the international community had previously to motivate Iran to abandon its nuclear pursuit will have been squandered. And, forebodingly, whatever hope there may have been for reaching an agreement with North Korea to deescalate tensions on the Korean Peninsula would perish. Few states would be willing to risk their political survival on a deal the U.S. could not be counted on to uphold. The United States would lose its 70+ year standing as a leader of the nonproliferation regime and reinforce its decline as a global superpower.

We’ll know soon enough which of these worlds we’ll inhabit.

National Security Generalists and Learning the Lessons From Lost Wars