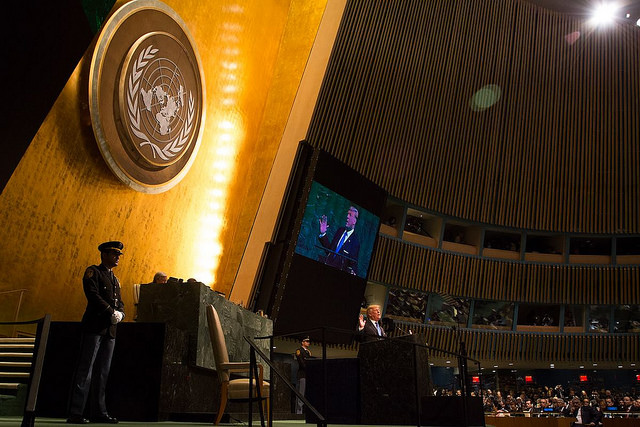 In an often combative speech before the United Nations General Assembly last month, President Trump at times praised, and other times disparaged, an institution he once dismissed via tweet as “just a club for people to get together, talk and have a good time.”

Although few doubt the need for reform of an increasingly sclerotic institution, President Trump’s evident disdain for the United Nations is misplaced, not least because of its ability to bolster perhaps his most coveted asset: his popularity.

An original survey experiment I conducted just after the 2016 election shows Trump might actually benefit from working through the very institution he so frequently ridicules, particularly in galvanizing support for his policies among members of his own Republican Party.

My own online survey experiment not only confirms this finding, but also suggests UN endorsement matters even to Republicans when shaping their opinions on the use of force.

After being presented with a presidential proposal to deploy American ground forces in response to a hypothetical border dispute between India and Pakistan, respondents were randomly assigned to one of six groups and supplied additional information varying across two dimensions: 1) the degree to which Democratic and Republican leaders in Congress supported the president’s proposal; and 2) whether or not the UN Security Council had authorized the deployment.

Overall, respondents were more likely to support the deployment of ground forces when told the UN Security Council had authorized such action. This remained true even when told that some members of Congress opposed this deployment.

Moreover, respondents who identified themselves as Republicans were just as likely to to be influenced by the UN Security Council’s actions as were those identifying as Democrats.

This finding — consistent with similar results found in recently published work by Matt Guardino and Danny Hayes — increasingly calls into question the hostility with which vocal Republican critics such as former UN Ambassador John Bolton cast aspersions on the United Nations and international institutions more generally.

Why might this be the case? Terrence Chapman and Alexander Thompson have argued that the general public may find the UN Security Council to be an especially informative signal of the merits of a proposed use of force, in part because of the difficulty any country confronts in securing the support of all five of its veto-wielding member states.

If true, this would require the public to have a relatively sophisticated understanding of the Council’s voting rules and the preferences of its member states. When asked two fact-based questions about the UN Security Council’s voting rules, however, less than a third of my survey respondents answered either true-false question correctly.

This finding suggests that the UN Security Council accrues authority in the eyes of the public not because of the procedural hurdles countries must surmount to obtain its approval, but instead because it conveys some broader signal of international legitimacy.

This is not to suggest that voices from abroad entirely crowd out those from domestic political elites at home. When respondents were told Democratic and Republican leaders in Congress endorsed the president’s actions, this bipartisan support offset any increase in opposition resulting from a refusal of the UN Security Council to authorize the deployment of ground forces. This finding might help account for the relatively high approval ratings President George W. Bush enjoyed on the eve of the 2003 invasion of Iraq, which received bipartisan support from Congress in spite of the UN Security Council’s refusal to authorize the war.

By securing UN approval for future military deployments, President Trump may be able to command higher levels of public approval for these actions, even among members of his own party. As he boasted last month, Donald Trump once recognized the United Nations’ potential when he built Trump World Tower across the street from its headquarters. Perhaps he will do so again through the dividends the UN can deliver in the realm of public opinion.

Teaching about Death and Violence: Thoughts from a Professor Who Calls Nevada Home