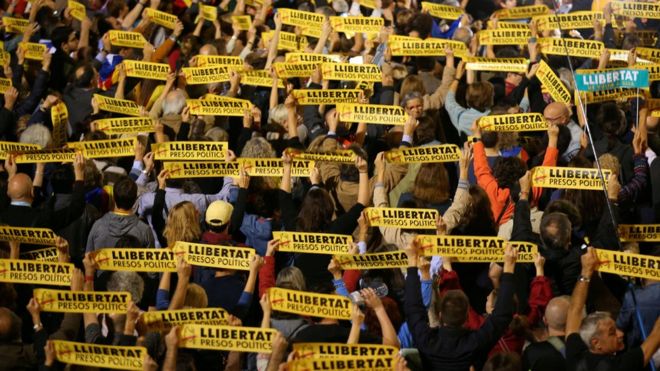 This is a guest post from Katy Collin, who is a post-doctoral research fellow at the Brookings Institution and an adjunct instructor at American University’s School of International Service. Her research is on the use of referendums in peace processes.

In the last few weeks, international borders have been challenged around the world. Secessionists and great powers are undermining the norm of territorial integrity, or border fixity. In the Middle East, East Asia, sub-Saharan Africa, and in Europe, international boundaries are being pushed from within and between states.

Respect for international boundaries has been one of the primary sources of stability in the post-World War II world. It has not been legitimate to conquer neighboring states and seize territory as a mechanism for dispute resolution or payment of international debt since the end of that war. Border fixity has contributed to the sharp decline in wars between states.

On the other hand, defending arbitrary international borders, particularly following de-colonization, may be one of the primary drivers of wars within states. Strong borders may protect weak states and promote fragility. Since World War II, about half of the wars and most of the violence globally have been associated in some way with struggles to alter borders. As much as the post-War international order has been built on border fixity, it has also established a normative case for the self-determination of peoples.

Great powers’ revisionist foreign policies and disregard for territorial integrity threatens to bring about a return of the worst security dilemmas of the 20th Century: competition between states for territory, while at the same moment degrading the best tools for addressing the security dilemmas of the 21st Century: making peace in civil wars and cooperatively addressing transnational threats to human security. State strength based on capable, liberal, resilient governance is the cure and inoculation to wars within states as well as the foundation for multilateral cooperation.

The most obvious challengers to territorial integrity in the last weeks have been secessionists. Catalonia and Iraqi Kurdistan have held referendums on independence. In Cameroon, Anglophone secessionists have been on the streets. At the UN General Assembly, independence activists from Indonesia’s West Papua province asked that their region be re-inscribed on the list of non-self-governing territories. Even white supremacist movements in the United States have been interpreted as the re-emergence of secessionist forces.

Central states have fought back. Spain deployed special police to shut down the vote, arrested parliamentarians for sedition, and shut down Catalonia’s autonomous government. Iraqi forces pushed Kurdish Peshmerga out of Kirkuk and other disputed territories, and took control of air space and international border crossings in the Kurdish autonomous region. In, Cameroon, security forces have killed peaceful protestors. In September, Nigeria launched a military campaign against separatists in Biafra. Despite the fact that the paths forward seem to be internal conflict or negotiation, states have chosen escalation and force over talks.

These states are failing to manage internal cultural diversity and economic disparity. That failure turns diversity into grievance that feeds into secessionism. The fact that the EU, UK, and Spain have undergone struggles with separatists in recent years and days is a worrying sign that this brittle situation is shared by relatively rich, stable, consolidated democracies, which have historically been resistant to secessionist efforts.

In Iraq and Spain, independence movements in autonomous territories pose a challenge to federalism, a frequently used structural approach for the accommodation of diversity. The tension between allowing for negotiated secession and using federalism to cement a unified central state has been felt from Canada to the United Kingdom to Myanmar. Rich and poor, western or not, states that fail to accommodate reasonable demands for cultural rights and mitigate disparity are at risk of an intensification of demands from separatists.

The number of secessionist movements has been roughly stable since World War II. The world is not experiencing new separatist movements, but the intensification of demands for independence. Why now?

Secessionism is on the rise because liberal democracy is under stress. States are failing to accommodate minorities and politically channel demands. In Spain, Catalan separatists called for secession after more than a decade of having demands for greater autonomy shut down by the conservative party of the current Prime Minister. In Iraq, Kurds have held their vote after constitutional mechanisms failed to address outstanding issues with their autonomy.

The last two waves of new states in the international system came during decolonization in the ‘50s and ‘60s and with the dissolution of the Soviet Union and Yugoslavia in the early 1990s. Both of these surges in secession were a response to failure of state forms: empires and communist regimes. It is not surprising, then, that the current activity by secessionist movements is possibly a response to weakness in liberal, democratic states.

It is not only sub-national actors chipping away at borders. Great powers are also undermining respect for territorial integrity. Russia and China have been challenging territoriality in their respective regions for several years. Since 2013, China, for instance, has been taking territory by making territory, constructing islands in the South China Sea. While China has been advancing dubious territorial claims in the east, it has also been stifling secessionist movements in its west.

Russia has invaded and seized territory from neighboring states. In addition to its activities in Ukraine, and with far less expense or international objection, Russia advanced its border into Georgia over the summer.

Like China, Russia has also been cracking down on separatists. However, at the same time, Russia has supported secessionist and far-right nationalist movements from around the world. These policies seem contradictory, but they are not. Russia seeks to increase its own security by de-stabilizing critics and neighbors. This is a realist foreign policy targeting liberal states by eroding border fixity.

The United States has also signaled it is willing to allow violations of international borders. The Trump Administration’s embrace of a possible “one-state solution” in the conflict between Israel and Palestine disregards border fixity. Palestine’s sovereignty is disputed and curtailed, both de facto and de jure. However, Israel has never asserted sovereignty over the West Bank or Gaza. The Trump administration’s statements on a possible “one-state” solution signal willingness to accept such an outcome, in violation of international norms.

Do inviolable borders help or hurt international security? Why shouldn’t international borders be adjusted to reflect the demands for self-determination in Catalonia, Kurdistan, or Biafra as they were in South Sudan, East Timor, and Eritrea? Does it matter to the international system when Russia seizes land in Ukraine or when China claims the South China Sea?

Partition may sometimes be part of peacemaking, but it has a poor track record. New states tend to be weak and authoritarian. Conflict recurrence is not unusual.

The international system’s best tools to address interstate and intrastate conflict are based in strong, supple, liberal states. States that recognize and address internal grievance rather than suppress secessionists are more likely to cooperate on shared international tasks as reliable partners. States that degrade the norm of territorial integrity reduce the potential for cooperative multilateralism. A government that jails dissidents, uses violence against citizens calling for political rights, and deploys security forces against internal enemies may escalate internal conflict as well as disrupt international peace.

States that effectively negotiate internally may be more likely to cooperate internationally. The rise in secessionist demands coupled with the rise in revisionist great power foreign policies may indicate connections between domestic and international weaknesses of liberal order.